Mythbusting The SEC: 5. Are The Top Players Actually Bigger And Faster Than Everybody Else?

Share All sharing options for: Mythbusting The SEC: 5. Are The Top Players Actually Bigger And Faster Than Everybody Else?

5. Are the SEC’s top players actually bigger and faster than everyone else, or are there just more good players?

I think the only way I can think to judge this from draft results is by looking at first round picks. If you’re an elite athlete that makes everyone else on the field look like they’re playing at a slower speed, you’re almost certain to be a first round draft pick.

Does the SEC have a disproportionate share of first round picks? Again, it would appear the SEC faithful are correct. Note in the graph below how most of the red and blue lines are pretty close to their averages, except the first round SEC average. 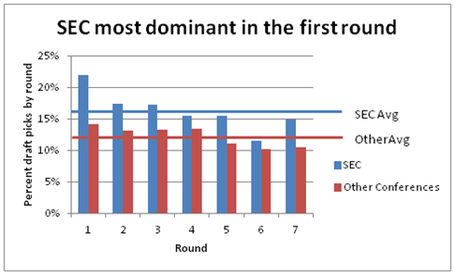 1) I used the next 4 highest conferences for the "other conferences" comparison (Big Ten, ACC, PAC 10 and Big 12).

2) Please keep in mind that there are extra picks in rounds 3 through 6, and even more compensatory picks in round 7, so the downward slope is natural.

Now, the sample sizes are just small enough that this could be noise in the data. After all, I see no reason why the SEC should be bad at producing sixth-round picks, so clearly that’s just luck of the draw whether they’re sixth or seventh round. But the first round is reserved for the most elite athletes. This isn’t where teams just take a chance on an iffy player, but well considered decisions. I think that trend is real.

So now, we’ve looked at how much overall talent the SEC has, how many elite players they have, how concentrated that talent is among the top teams and where those players play. The final section discusses what does it mean for Mizzou’s move to the SEC.