Mythbusting The SEC: 2. Are The Top Teams Extra Talented?

Share All sharing options for: Mythbusting The SEC: 2. Are The Top Teams Extra Talented?

2. Is the SEC talent advantage due to top teams being extra talented, or is the whole conference more talented?

On average, the whole conference is more talented. The SEC has more strong teams, and slightly more "middling" teams, but it also has its share of bad teams. The interesting story here is that the Big 12 was a surprisingly weak conference. Considering that it was widely considered to be the second best conference, it is ahead of only the Big East in terms of number of poor teams and overall picks per team. But there’s also a lot of strength at the top. The Big 12 is a picture of a conference with the haves and the have nots.

(This chart is a little tricky to read, but basically more dark blue is good, and more light blue is bad.) 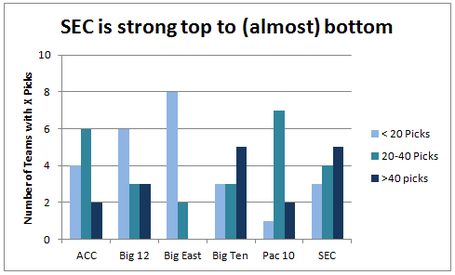 This is worth discussing a bit more beyond the SEC. Interestingly enough, three teams just dominate the draft: Ohio State (81 picks), Miami (73) and USC (71).

I gave Miami, Virgina Tech and BC to the ACC despite their move from the Big East in 2004. The ACC looks a lot like the PAC-10 to me. USC is also an elite team like Miami, and both conferences have lots of middling teams.

The Big East just looks bad here. No elite teams. Only two middling teams, and no elite teams, this conference is clearly is a cut below on the talent level. And yet, still a cut above the mid-majors. They have double the number of picks of the next highest conference, the MWC.

The Big 12 is a picture of a conference of haves and have nots. Only the Big East has more bad teams, and yet there’s a lot of quality at the top. However, Nebraska’s move to the Big Ten leaves this a two king conference.

The SEC has five teams with 40+ picks in the last 10 years. Even more impressive is that four of those five have 50+ picks. Only the ACC has more than one team over 50 (VT and Miami). And that exclusive company doesn’t include the owner of two of the last three national titles: Alabama (49 picks). 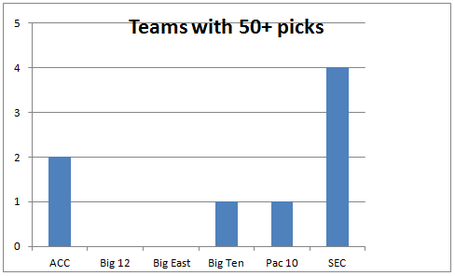 This is really what scares me about the SEC. The fifth most talented team in the whole country for the last decade (Georgia) could only muster 2 conference titles, and none in the last 6 years. In such a talented conference, a couple of bad seasons means a coaching carousel, which means losing recruiting momentum and it’s a death cycle. There’s a reason there are a few teams that just can’t make it out of the cellar. Without a tradition to rebuild on like Tennessee and Florida have, teams in this conference can become doormats.