Mizzou Moves To The SEC: Georgia Football Either Elite Or Near-Elite

Share All sharing options for: Mizzou Moves To The SEC: Georgia Football Either Elite Or Near-Elite

The next new conference rival in this series is the first one that will square off with Mizzou this fall. Hunker down, you hairy dawgs. 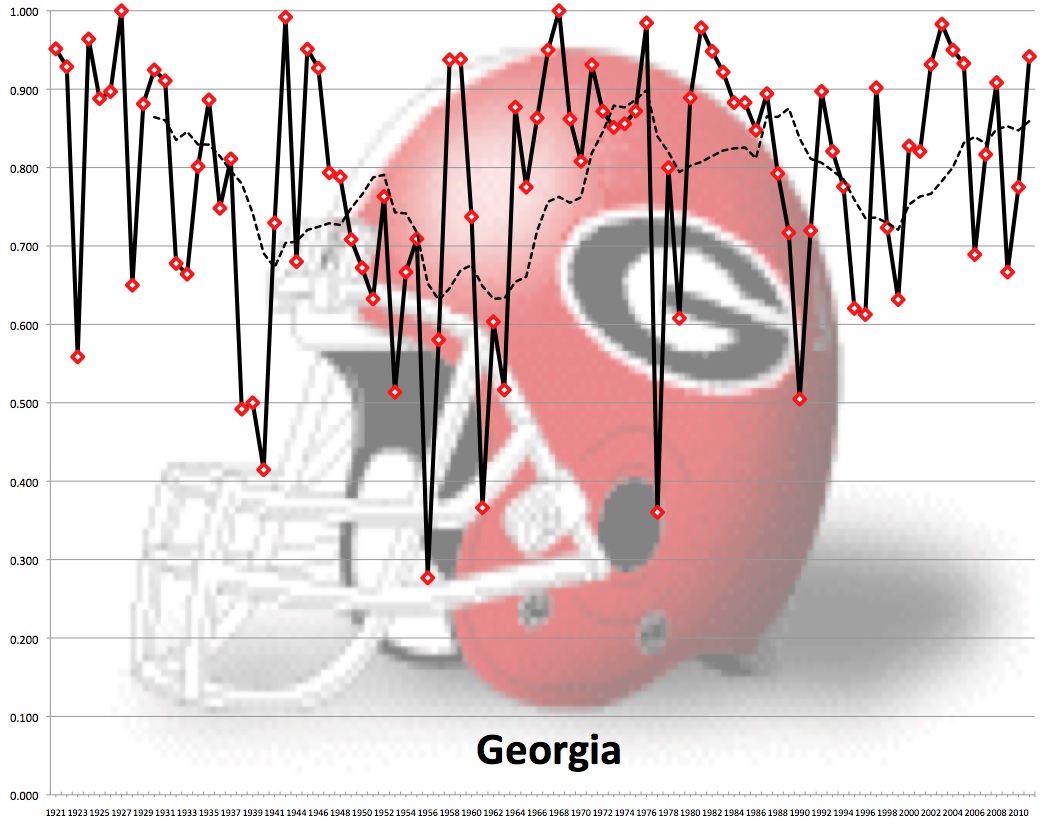 Georgia's Percentile Performance Since 1921 (according to S&P+ and Est. S&P+).
The dotted black line is the school's ten-year average.
For more on Est. S&P+, start here.
(Original helmet photo via NationalChamps.net)

Elite, but not elite. Successful, but underachieving. Georgia has one of the more complex histories in college football. They have won 10 or more games 19 times, they have finished in the AP Top 10 19 times, they have won 12 conference titles, and they claim two national championships. They take up residence in a state that, outside of the usual suspects (Florida, Texas, California, and maybe Ohio) produces as much BCS-level talent as any in the country. (The state of Missouri has produced 46 four-star recruits and three five-star recruits in the last 12 years; the state of Georgia has produced 250 four-star recruits and 21 five-stars.) Are the Dawgs a member of college football's royalty? If they're not, should they be? Of course, for the most part Mizzou fans probably don't care too much about those questions, instead focusing on only this one: will they field a winning team in Columbia on September 8?

We'll find out that answer soon enough. For now, let's go back in time.

Butts rebounded, however. His 1959 Dawgs came out of nowhere, improving from 4-6 to 10-1 with Fran Tarkenton behind center, winning the SEC for the first time in 11 years, beating Missouri in the Orange Bowl and finishing fifth in the AP Poll. His career wrapped up with a 6-4 record in 1960. His successor, assistant Johnny Griffith, crashed and burned, going just 10-16-4 in three seasons. Griffith never really had a chance -- alumni were split about his hire, and he had to field a team while both Butts and Bear Bryant fought off game-fixing allegations. In 1963, Griffith gave way to the next great Georgia coach, Vince Dooley.

1967-76. For all intents and purposes, Vince Dooley is Georgia football. Granted, he spent his early career as an Auburn assistant, but Dooley was Georgia head coach from 1964-88 and Georgia athletic director from 1979-04. He won national coach-of-the-year awards in both 1976 and 1980, he won SEC Coach of the Year five times, he was inducted into the Georgia Sports Hall of Fame before winning the 1980 national title, and he was around long enough to hire current Georgia coach Mark Richt.

It didn't take Dooley long to rebuild the fallen Georgia football program. In the 13 years before he took over, the Dawgs had finished ranked just once and had won more than six games in a season just twice. In his first five seasons in charge, Georgia won at least six games every year, finished ranked fourth in the country in 1966 and finished eighth in 1968. They whipped SMU in the 1966 Cotton Bowl and rather quickly established themselves as one of the nation's great defensive teams. Georgia allowed fewer than 120 points in a season four times in Dooley's first five years.

Herschel Walker, the most sought after high school football player in the nation, signed a national letter of intent Sunday to play for the University of Georgia Bulldogs.

The Johnson County running back who received scholarship offers from virtually every major college football [sic] in the country, turned down such powers as the University of Southern California and Ohio State to go to the Athens, Ga., campus just 70 miles from his home in the middle Georgia farming town of Wrightsville.

The 18-year old Walker ran for 6,137 yards and scored 86 touchdowns in his high school career. He was a starter all four years, playing defensive end as a freshman before switching to running back. [...]

"I sat down and thought about it yesterday and today and that's (signing with Georgia) what I came up with," Walker said in a telephone interview.

He said he decided to sign with Georgia, which his sister attends on a track scholarship, because "I felt more at home there."

The explosive running back said that the months of anticipation that surrounded his decision had more effect on sportswriters and anxious coaches than on him. "I didn't feel bad," he said.

"Tonight, I'm going to sit down and try to write something about it (recruiting). I haven't had much time to think," he said.

He added that he did not expect to start for the Bulldogs this fall.

"There's a lot of other athletes on scholarships (at Georgia), and they have talent just like I have."

Originally, Dooley had the same idea as Walker, intending to bring the youngster along slowly. But then Georgia, the preseason No. 16 team, fell behind at Tennessee in the season opener. So the freshman got the ball..

L. Bates engages. There's little worse than doing everything you're supposed to do and still getting destroyed by the vicissitudes of fate and genetics far superior to yours. The postures of the two are unique to humans alone: even when ramming, mountain goats and rams will start from the superior position and attempt to strike down with gravity. The bodies in position are precursors to the Tebow/Berry collision of 2009. The results are drastically, drastically different.

L2. Sometimes, there is no hope or chance. This is a reminder. If Hemingway's watching, he reminds you that the struggle is all that matters here, and that Bates is doing what he should: facing fate bravely. True. He's also about to die a horrible, horrible football death, the kind they usually fail to mention when doing the BLAH BLAH WHITE SHORES AND GLORY part of the speech. It's noble to fight the bear, but remember: when he eats you, you're probably going to have to watch some of the gory footage.

O. The low man is sacked and burned to its foundations.

P. Bates actually makes a game attempt to grab Walker's leg. That is fighting to the end, even against unreasonable odds and unstoppable force.

Q. Tennessee would lose this game 16-15, and I would wager large currencies that even now the memory rankles the gut, because the endorphin payoff from winning never balances out the lingering stain losing makes on you. Perhaps it's evolution's way of marking things you have to avoid or rethink before attacking in the name of food or mating: THIS THING BITES, TRY NOT TO TOUCH IT AGAIN. It would certainly explain long losing streaks by teams against other teams that defy all other explanation. Assocation, fear, imprint, and repeat.

In three years, Walker would rush for 5,259 yards and 49 touchdowns. Georgia went 33-3 in those three seasons. The top recruit in the country doesn't always live up to expectations. Walker did. And for every fanbase whose school managed to sign a top recruit (including Missouri in 2012), he skewed expectations to ridiculous, unfair, unattainable levels.

Donnan, a Missouri assistant under Warren Powers from 1981-84 and Barry Switzer's offensive coordinator at Oklahoma from 1985-89, saw his tenure take shape in a similar way: start slow (5-6 in 1996), explode (10-2 in 1997), then limp back toward average. The Dawgs did go 25-11 from 1998-00, however, winning bowls and finishing in the Top 20 all three seasons. But Georgia was still mostly a non-factor in the SEC East with Florida and Tennessee peaking, and despite Dooley's wishes, university president Michael Adams (who often managed to involve himself in athletic matters) fired Donnan. (Donnan has since encountered a different sort of adversity).

Enter Mark Richt. A Miami alumnus who won two national titles as Bobby Bowden's offensive coordinator at Florida State, Richt interviewed for the Missouri job, then took the Georgia job instead. It's worked out pretty well for both him and the school. Georgia went 8-4 in his first season (2001), then surged to a surprise conference title in 2002, finishing 13-1 and third in the country. They won the East again in 2003, won the SEC again in 2005, and went to two more conference title games in 2007 and 2011. He has produced double-digit wins in seven of the last 10 seasons, and in 2011 Georgia rebounded from a tough stretch (14-12 in 2009-10, which put Richt squarely on the hot seat) and an 0-2 start to win 10 games in a row and win the East.

Richt's tenure is an interesting case study in luck. If his 2002 squad had gone 13-1 in a different season (perhaps 2001 or 2003), they very well may have earned a shot at the national title, perhaps even winning it. Instead, Richt timed his best season in a year that produced two undefeated BCS-conference teams (Miami and Ohio State). Years later, one of the critiques of Richt's tenure is that he hasn't won a title, hasn't won "the big one." As I've said many times, when it comes to true, elite levels of success, you have to simply hope to put a great product on the field as many times as possible and hope that the breaks eventually go your way. Georgia has taken a relative step backwards in recent years -- they finished in the Top 10 in five of six seasons from 2002-07 but haven't since -- but are expected to challenge for elite status again in 2012.

21: Frank Sinkwich. Win the Heisman, get your number retired.

34: Herschel Walker. Win the Heisman and become one of the greatest running backs of all-time, get your number retired.

48: Theron Sapp. Win all-SEC honors, break a long drought of losses to Georgia Tech, and carry the Philadelphia Eagles to an NFL title, get your number retired.

Until 1981, the "track people" congregated on and around the railroad tracks on the east end of the stadium. They were rowdy and ridiculous, and they were blocked by a major east-end expansion following the 1980 season. And Georgia hasn't won a national title since. COINCIDENCE???? 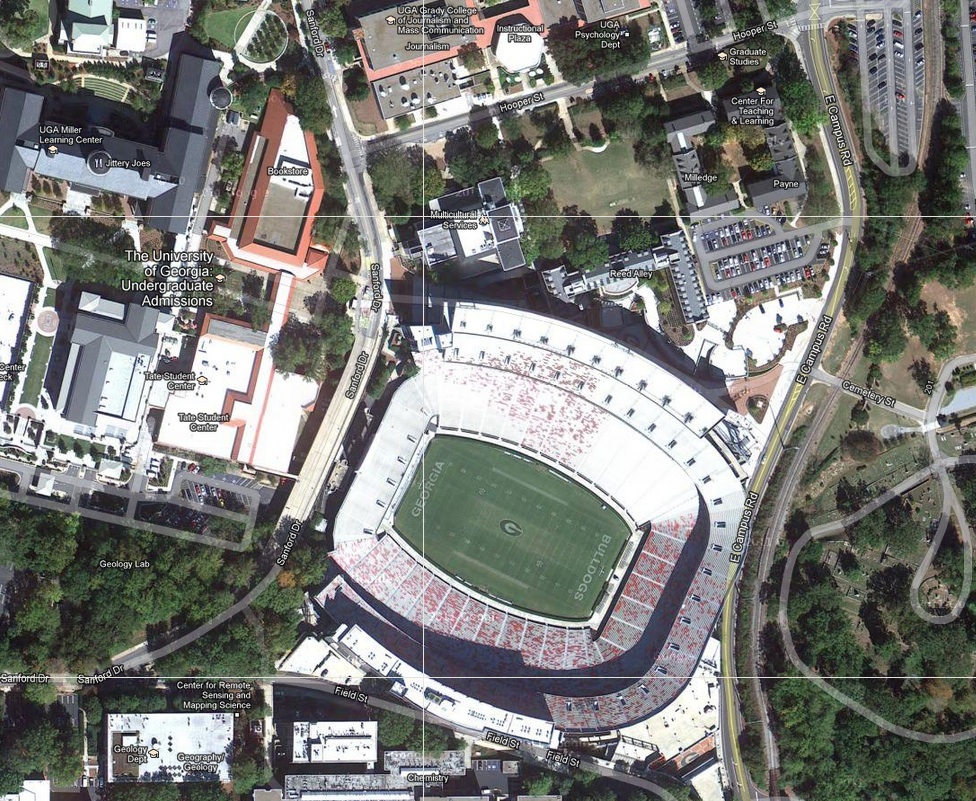 Georgia Football
Celebrating Larry Munson, one of college football's greatest ever announcers
There have been quite a few Ugas in recent years. Uga VI (here) died in 2008, Uga VII in 2009, Uga VIII in 2011.
Frank Tarkenton and Georgia knock off Auburn in 1959.
Run, Lindsay, Run! (Full game and analysis here.)
Herschel Walker was really, really good.
Herschel Walker is still a complete freak.
Florida is No. 1 for the first time ever in 1985. Georgia puts a quick end to that.
Before he was a mediocre-but-enthusiastic-and-improving announcer, David Pollack was a complete and total badass.
Georgia beats Florida in 2011 in the Game Formerly Known As The World's Largest Outdoor Cocktail Party

View their statistical profile here. Suspensions will prevent Georgia's defense from being full-strength versus Mizzou -- corner Sanders Commings is gone for two games, safety Bacarri Rambo for four, linebacker Alec Ogletree for two, and corner Branden Smith might be suspended, too -- but this is a stout team regardless.

Wait, wait, wait ... Missouri has a losing record versus someone?? FIRE DAN DEVINE.