Mizzou Moves To The SEC: Broyles' Fingerprints All Over Arkansas Football

Share All sharing options for: Mizzou Moves To The SEC: Broyles' Fingerprints All Over Arkansas Football

Since Texas A&M is in no way a new conference rival, this week marks the sixth and final week of our SEC West experience. Next week, we move to the SEC East. Say hello to your new border rival, Mizzou fans. 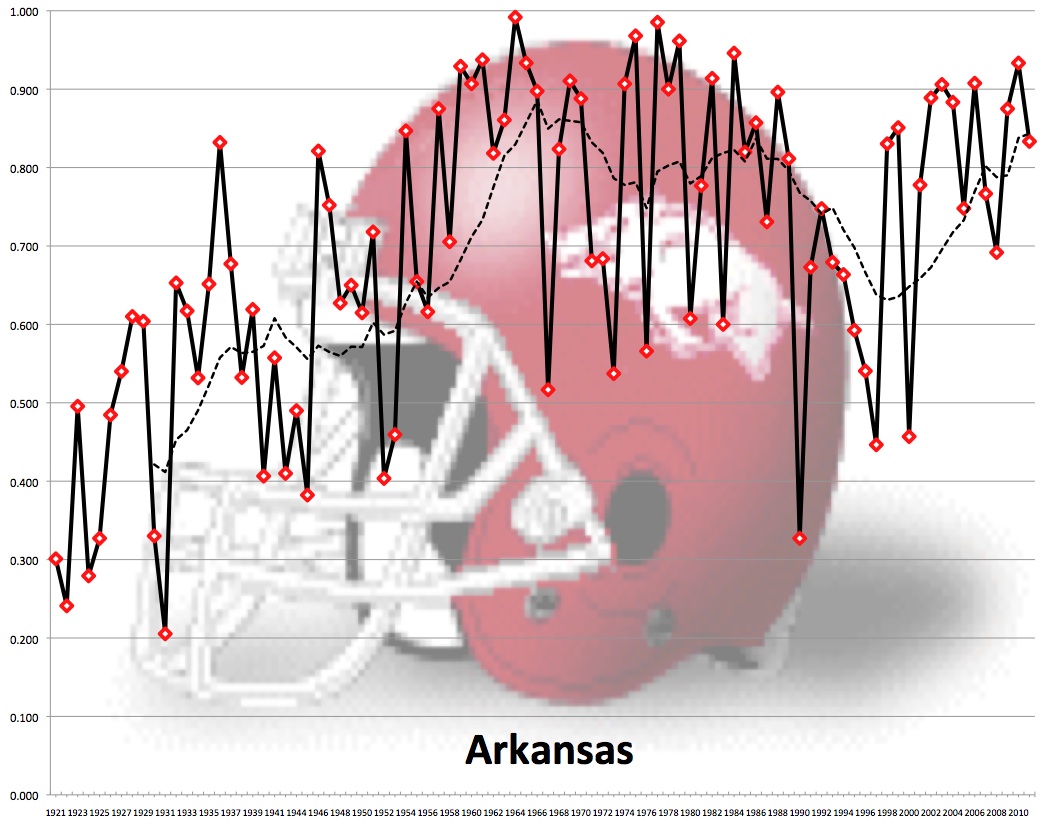 Arkansas' Percentile Performance Since 1921 (according to S&P+ and Est. S&P+).
The dotted black line is the school's ten-year average.
For more on Est. S&P+, start here.
(Original helmet photo via NationalChamps.net)

From what I can tell, Missouri's and Arkansas' respective histories differ in four specific ways:

1. Arkansas' greatest ever coach (Frank Broyles) did not leave in 1971 for the Green Bay Packers like Missouri's (Dan Devine) did.

4. The Hogs left their Texas-based conference 20 years before the Tigers left theirs.

Let's take a look at the program to which Missouri will often be compared now and into the future.

Arkansas continued to struggle through war times -- from 1942-45, under three different coaches, they went just 13-26-1 -- then experienced a brief renaissance under one-time Tennessee coach John Barnhill. They won either five or six games each year from 1946-49, fought LSU to a draw in the 1947 Cotton Bowl, and took out William & Mary in the 1948 Dixie Bowl. But Barnhill retired after being diagnosed with multiple sclerosis (he would remain as Arkansas' athletic director until 1971), and his first two hires, Otis Douglas and Bowden Wyatt (who left to become Tennessee's coach) and Jack Mitchell (who left to become Kansas' coach), combined to go just 37-43-1 from 1950-57. Wyatt did enjoy a conference title and Cotton Bowl season in 1954, which got him hired away to Knoxville, but it was the only time in that stretch that the Hogs went to a bowl or finished with more than six wins.

It's funny the way history's Butterfly Effect plays out. We will go into more detail about this tomorrow, but in 1957-58, Kansas hired Jack Mitchell away from Arkansas, Arkansas hired Frank Broyles away from Missouri, Missouri hired Dan Devine away from Arizona State, and everybody passed on future legendary Nebraska coach Bob Devaney. We'll save the juicy bits for later, but for now all you need to know is that Broyles went to Fayetteville and turned Arkansas into a real football program.

1957-66. Before Frank Broyles, Arkansas had finished ranked in the Top 10 just once, in 1954. In Broyles' 19 years in charge of the Razorback program, they did it nine times. After going 4-6 in his first season in charge, they would win at least eight games in seven of the next eight seasons and 12 of the next 14. They would go to four Cotton Bowls (winning two) and four Sugar Bowls (winning one). In his first eight years in charge, they beat six Top 10 teams; they beat No. 1 Texas in back-to-back seasons (1964-65). With wins over Texas and No. 7 Nebraska in the Cotton Bowl, they claimed the 1964 national title from the Football Writers Association of America (Alabama won the AP title).

Enter Lou Holtz. The Bobby Petrino of his day, Holtz went from Woody Hayes' coaching staff in 1968 to head coach of William & Mary in 1969. He jumped to N.C. State in 1972, then the New York Jets in 1976. He resigned before a single season was through, however, and immediately jumped to Arkansas. (And you thought their hiring of Petrino away from the Atlanta Falcons was a rare thing.)

Holtz may have been hired under semi-sleazy circumstances, but it's hard to argue with the selection. In his first season in charge, 1977, the Hogs surged to an 11-1 record that included a tight loss to No. 2 Texas and a 31-6 destruction of No. 2 Oklahoma in the Orange Bowl. They finished third in the country in 1977, 11th in 1978, eighth in 1979, and ninth in 1982. After a 6-5 campaign in 1983, Holtz resigned and hopped to another lilypad, this time Minnesota, where he stayed for all of two years until the Notre Dame job opened up. In Holtz's absence, Broyles made a lot of decent-to-solid hires.

First, it was Air Force coach Ken Hatfield, who posted five straight seasons of either nine or 10 wins from 1985-89 before jumping to Clemson.

Then, it was Hatfield's offensive coordinator Jack Crowe, who went just 9-15 and resigned. (He is now the longtime, successful coach at Jacksonville State.)

Then, it was former Clemson coach Danny Ford, who led the Hogs to a surprising SEC West title in 1995 (at 5-3) but went just 26-30-1 in five seasons in Fayetteville.

Then, it was the right reverend Houston Nutt, one of college football's ultimate teases. He led the Hogs to a surprising 8-0 start with wins over Alabama, at South Carolina and at Auburn, and his No. 10 Hogs led No. 1 Tennessee late in Knoxville. But then this happened. Clint Stoerner infamously fumbled away a late lead, Arkansas lost three of four to finish the season, and the Hogs spent much of the next decade chasing what could have been. They were consistently solid under Nutt, winning two SEC West titles (2002 and 2006), but they couldn't ever break through all the way, even with Darren McFadden and Felix Jones in the backfield, and Nutt was cut loose before the Cotton Bowl in 2007.

The last 55 years in Arkansas' history have been creative, interesting, and mostly successful. We'll see what happens with a coaching change on the horizon.

12. Clyde Scott is one of Arkansas' greatest ever athletes, both a football star and an Olympic medalist in the 110 meter hurdles. He was a first-round NFL draft pick in 1948.

77. Brandon Burlsworth was a walk-on turned All-American in the late-1990s. He was drafted in the third round of the 1999 NFL Draft but died in a car wreck less than two weeks later. In his honor, the Brandon Burlsworth Foundation was created to help underprivileged children.

Arkansas plays its home games on Frank Broyles Field in Donald W. Reynolds Razorbacks Stadium. Capacity: 72,000. The south endzone has been designed to hold an additional expansion of about 7,300 more seats when deemed necessary and appropriate. It is a bit more vertical than Missouri's Memorial Stadium, and as you see from the map below, it towers over Razorback Road, which lends to an odd driving experience. 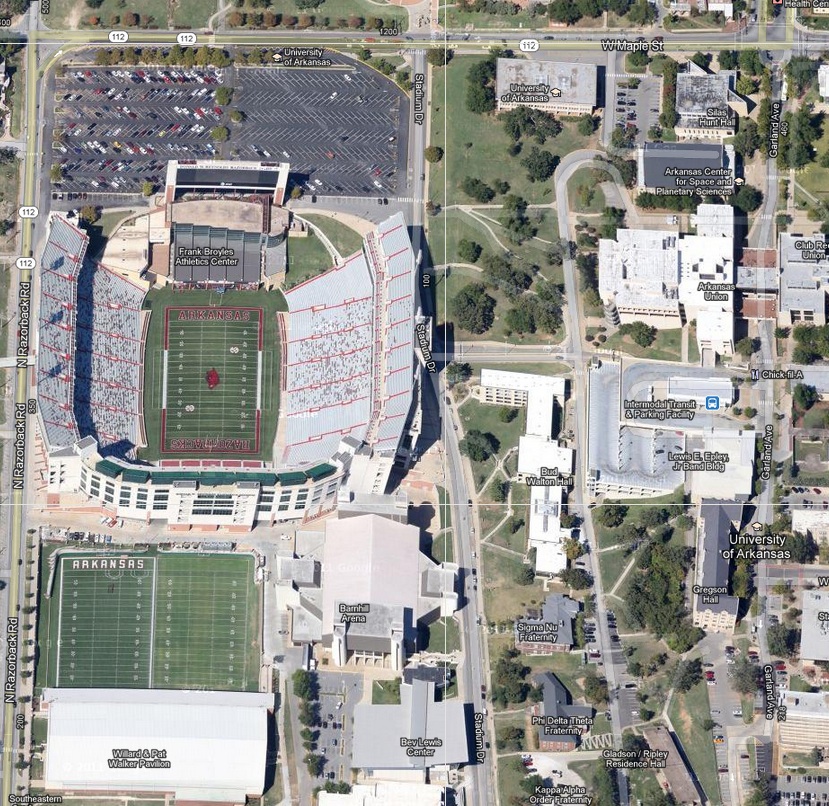 Call them Hogs.
Frank Broyles is Arkansas football.
A 10-7 win over Nebraska completes an undefeated 1964 season.
Lou Holtz's Hogs destroy Oklahoma in the 1978 Orange Bowl.
A win over Texas A&M gives the Hogs their second straight SWC title in 1989.
The "Miracle on Markham" steals a win over LSU and the 2002 SEC West title.
Darren McFadden made a habit out of destroying South Carolina.
Arkansas shocks LSU over Thanksgiving in 2007, opening the door for the Missouri-Kansas winner to become No. 1.
Arkansas puts the LSU game away on fourth-and-3 in 2010
Arkansas comes back from 18 points down to beat Texas A&M in 2011. (Full game here.)

View their statistical profile here. John L. Smith inherits an interesting roster that is almost certainly of Top 15 caliber but still quite a ways behind Alabama and LSU. Barring a surge from an Auburn, Mississippi State or Texas A&M (always a possibility), the Hogs will be a pretty clear No. 3 in the SEC West.

Once again, Mizzou leads an all-time series. Going back to 1906, the Tigers have taken three of five from the Hogs. Blurbs from the 1944 and 1963 games below come from Bob Broeg's inimitable Ol' Mizzou: A Story Of Missouri Football.