Okay, so Vandy Week has turned into "Vandy A Couple Of Days." You still get lots of pretty charts and stories here, even if it's a few days late, right?? 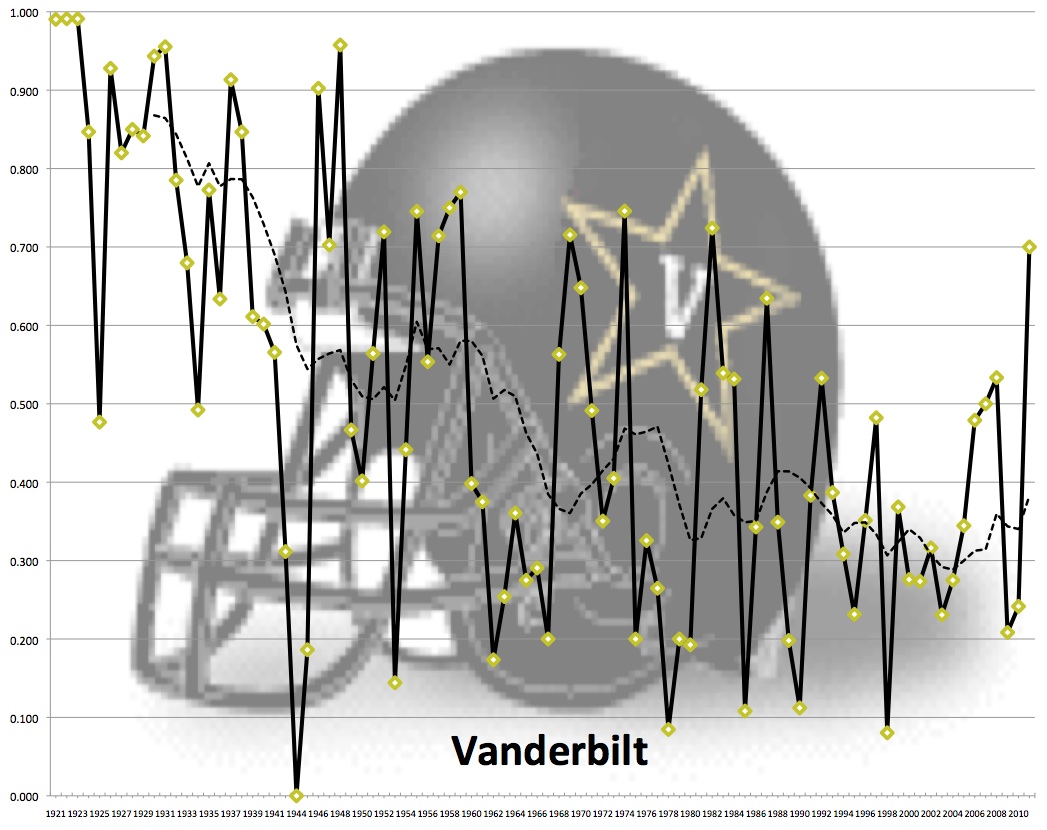 Vandy's Percentile Performance Since 1921 (according to S&P+ and Est. S&P+).
The dotted black line is the school's ten-year average.
For more on Est. S&P+, start here.
(Original helmet photo via NationalChamps.net)

Like Duke, Vanderbilt was, at one point, really, really good at football. The problem is that point was about 90-100 years ago. It was downhill from there, and it stayed downhill for a while. Put it this way: that Vandy team that went 6-7 last year? It might have been their best team in 30 years. That doesn't change the optimism for the future, but it does put into perspective that, in the SEC, someone has to lose. And historically, it's usually been Vanderbilt.

That said, it's now hip for the smart-kid schools to get their football act together. Jim Harbaugh laid out the blueprint at Stanford -- basically: bring in as many tough, smart kids as possible and teach them to be even tougher -- and in his first season as Vandy head coach, James Franklin followed that script rather well. I'm not sure what the Commodores' ceiling is with Franklin in charge, but it's higher than it once was, that's for sure.

1921-30. Vandy really was once quite stout on the gridiron. The Commodores went 81-12-5 from 1902-12, then dominated in the early days of the Southern Conference. In his illustrious career, head coach Dan McGugin (part of the coaching tree of Michigan legend Fielding Yost) led Vandy to 197 wins in 31 years (1904-34). He won eight SIAA titles in the pre-SoCon days, then won two SoCon titles in the 1920s. In his hilarious first season (1904), the Commodores won their first three games, against Mississippi State, Georgetown (Ky.) and Ole Miss, by a combined 196-0. For the season, only one opponent scored on them (Missouri-Rolla, of all teams, lost just 29-4), and they outscored opponents 474-4. 474-4! In fact, Vandy didn't lose to a team not named Michigan until Ohio State beat them late in McGugin's fifth season.

When his career was over, McGugin had posted a better win percentage than Bear Bryant would do in the latter half of the 20th century. He is a member of the Football Hall of Fame and was, predictably, an inaugural member of Vandy's own Athletics Hall of Fame. According to his hall of fame bio, he was "one of the first collegiate coaches to promote intersectional rivalries, the first coach to pull guards in the interference, the first to successfully work the onside kick and one of the first to emphasize the forward pass." Not bad. Somehow, only one athletics building (the home of the athletics office) is named after McGugin -- I'd have assumed all of them would be.

McGugin coached his final game in 1934, but Vandy held onto spotty success for a while thereafter. His successor, Ray Morrison (McGugin's quarterback from 1908-11), won at least six games three times in five years, and after World War II, Red Sanders (evidently the originator of "Winning isn't every thing, it's the only thing") guided the 'Dores to an 8-2-1 record (and a No. 12 finish) in 1948. But Sanders took the UCLA job in 1949 (he led them to three conference titles and a share of the 1954 national title), and the slide began.

Watson Brown, who would enjoy a run of at least moderate success, first as an offensive coordinator at Mississippi State and Oklahoma, then as the godfather of the fledgling UAB football program (they won between five and seven games in nine of his first 10 seasons), won 10 games in five years at Vandy from 1986-90. Gerry DiNardo guided Vandy to a 19-25 record from 1991-94, and that was such an impressive accomplishment that he scored the LSU job because of it. And when DiNardo left, things really took a turn for the worse.

1995-2004. You almost certainly don't know who Ron Dowhower is. Though he had failed in two seasons as the Indianapolis Colts' head coach in 1985-86 (record: 5-24), he had otherwise put together an interesting resume as an assistant coach at UCLA, Boise State, and Stanford, then as an NFL offensive coordinator at Denver, St. Louis and Atlanta. Two years as Vanderbilt's head coach basically erased his name as viable.

Dowhower was hired over an interesting set of candidates:

We obviously don't know if anybody could have won at Vandy in the mid-1990s. But we know that Dowhower couldn't. Vandy went 4-18 in 1995-96. They beat Kentucky and Louisiana Tech in 1995 and North Texas and Watson Brown's UAB in 1996. They lost their other 18 games by a combined 477 to 151. Dowhower was an offensive assistant, but his teams averaged just 11 points per game over two seasons. He didn't see a third.

Dowhower's time was enough of a failure that Vandy decided Woody Widenhofer, he of "12 wins in four seasons at Missouri" fame, looked like an attractive option. As he did in 1987 at Missouri (Mizzou went 5-6 and outscored opponents but went 1-3 in one-possession games and failed to reach a bowl), Widenhofer almost put something together for one season. Vandy inexplicably started the season 5-3 in 1999 but lost at Florida by just seven points, then somehow lost to Kentucky at home by two. They finished 5-6 ... and would win only five combined games the next two years. And then it was Furman head man Bobby Johnson's turn.

Think of Bobby Johnson as Vandy's Larry Smith. He methodically tore down others' messes and almost did something great, but he couldn't maintain momentum, instead setting the table for the next guy. After three dreadful seasons (Vandy went just 6-29 in his first three years), Johnson just kept inching closer and closer to the elusive bowl bid. Vandy started 4-0 in 2005, winning at Wake Forest and Arkansas, but they lost at home to Middle Tennessee and plummeted, losing six in a row and finishing 5-6 (after an upset win over Tennessee). In 2006, the 'Dores lost four games by a combined 18 points -- 13-10 at Alabama, 21-19 to a 10-win Arkansas team -- and finished 4-8. In 2007, they once again started 5-3, but they lost to Georgia, Kentucky and Tennessee by a combined 11 points and finished 5-7 again.

The 2008 season started in a very familiar way. Wins over Miami (Ohio), South Carolina, Rice, and Ole Miss made Vandy 4-0 at the end of September. ESPN's Gameday came to town on October 4, and Vandy beat No. 13 Auburn, 14-13, to move to 5-0 and 13th in the country. This year is different! This is the year they break through! But then the 'Dores lost at unranked Mississippi State by three points. Then they lost at Georgia by 10. Then they lost at home to DUKE. The wheels were officially off, but somehow they pulled out a 31-24 win at Kentucky in the middle of the drastic slide, got to 6-6, and knocked off Boston College in the Music City Bowl (their backyard, basically) to finish 7-6. The backslide was drastic, but they still won a bowl for the first time since 1955. And then they proceeded to go 4-20 over the next two seasons. James Franklin showed up in 2011 and immediately led them to the Liberty Bowl. Vandy was by no means great in 2011, but they were salty. They won the games they were supposed to win (6-1 versus teams with a losing record) and showed some serious competitiveness in tight losses to Georgia, Arkansas and Florida, but they finished 0-6 versus teams with winning records. They will try to change that in 2012.

Vanderbilt Stadium, which houses Dudley Field, in no way looks like an SEC venue. Vandy has played football here since 1922, but the new version of the stadium has stood since 1981. Its official capacity is just 40,550, which requires Vandy to call it "intimate." 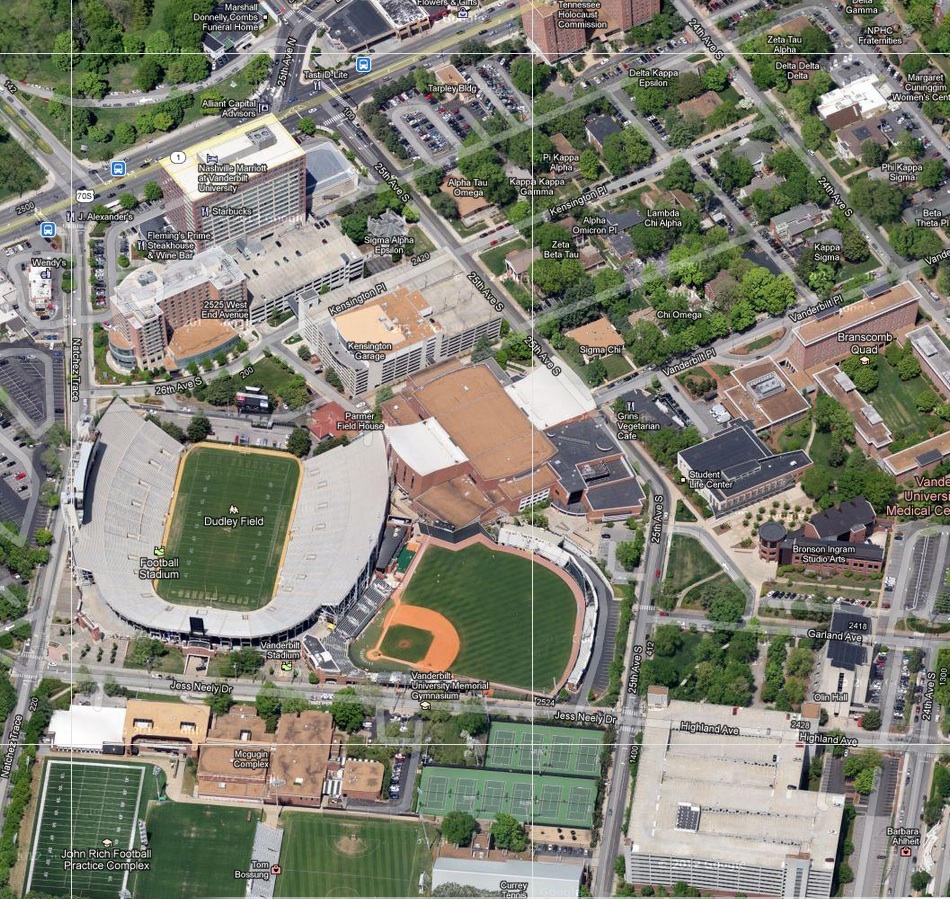 Ten semi-random highlights via the YouTubes (side note: wow, has Vandy's YouTube channel done a spectacular job of cataloging every even decent Vandy football moment):

Vandy finishes off an upset of Florida in 1974.
Vandy knocks off Auburn in the 1955 Gator Bowl.
Vandy and Texas Tech battle to a draw in the 1974 Peach Bowl.
Vandy drops the 1982 Hall of Fame Bowl to Air Force (with Johnny Unitas in the booth)
Vandy beats No. 13 Auburn in 2008 with GameDay in attendance.
2008 Music City Bowl champions.
RB Zac Stacy is, uh, pretty strong.
Vanderbilt celebrates Win No. 6 and bowl eligibility in 2011.
James Franklin sound bites!
2012 SEC Media Days

Mizzou has winning records versus Alabama, Florida and LSU ... but not Vanderbilt, at least not in the last 100 years. WHY HAVEN'T WE FIRED DAN DEVINE YET?

Missouri's first game with Broyles at the helm was in Nashville, to take on a Vanderbilt Commodore team that was in the midst of one of its more successful spans under coach Arthur Guepe. Guepe, while recognizing the athletic limitations of such a strictly academic school, wrung out some wins in his tenure. In 1955, Vandy had started 1-2 and made a dramatic charge, winning seven of eight to end the season and beating #8 Auburn in the Gator Bowl, the last time Vandy would win eight games in a season until 1982. In 1956, they had managed a 5-5-1 record against a tough slate of SEC teams, and they would field a pretty competitive 5-3-2 team in 1957 as well.

Even against a less-athletic squad like Vandy, Broyles realized he had little discernible athletic advantage. From the opening kick of the season, Broyles' strategy at Missouri was simple: ball control. Mizzou's best weapon? The quick-kicking of Bob Haas. Missouri had lost nine straight season-openers under Faurot, and while the offense didn't score against Vandy, the defense did the trick in breaking the losing streak. Linebacker Tom Swaney picked off a pass and returned it for a touchdown, leading to a 7-7 tie. It wasn't a win, and Vandy wasn't an amazing team, but they were better than anybody Mizzou had beaten in 1956, and this was a pretty good start.

Mizzou was somehow 0-9-1 in season openers since shutting out SLU to start 1947...and they didn't really play well enough to break that strange streak. In front of 24,000 at Memorial Stadium, and on national television to boot, Devine's "multiple offense" never got untracked, at least not when it counted most. Mizzou drove multiple times into Vandy territory, but they just couldn't put many points on the board. Vanderbilt led, 12-8, late in the game when Mizzou put together one last charge. They faced a fourth-and-goal from the 1, and instead of plowing forward with the bigger Hank Kuhlmann, he went with Norris Stevenson...who was stopped inches from paydirt. Vandy certainly wasn't a bad team, but they were one you'd hope to beat if you wanted to know you could compete in the Big 8 later in the season.

It was a disappointing start to the season, but there were promising moments--the sophomore Stevenson had played well at times, and fellow sophomore Danny LaRose, an end, came in and played well when Dale Didcock got injured.