Georgia 41, Missouri 20: Beyond The Box Score

Share All sharing options for: Georgia 41, Missouri 20: Beyond The Box Score

As always, a) if you don't understand any of the terms, there's a quick glossary at the bottom, and b) if you don't care to learn what the numbers mean, just skip to the words.

A couple of decimal points and two enormous plays by Jarvis Jones. That's pretty much the difference in the game. Well, that and some terrifying rushing numbers.

In a nutshell: Mizzou avoided passing downs better than Georgia, and neither team did much of anything on passing downs, but Mizzou's inability to create holes in the run game was costly, and despite Mizzou's two long pass plays, Georgia was slightly more likely to make a big gain overall. On a play for play basis, only about three points separated these two teams, but turnovers, a missed Mizzou field goal and, late in the game, a tilted field made the difference.

I've Already Said A Lot About The Offensive Line Today...

...but honestly, it is difficult to find anything else to talk about right now. Below are Missouri's average Line Yards Per Carry (non-garbage time) for every game since the beginning of the 2010 season.

Mizzou's run-blocking against Georgia was 42 percent worse than the next-worst performance on this list. It was really, really bad. Continued performance at that level would be an outright disaster for this team. However...

...with a similarly makeshift line in Week 1, Mizzou's performance against SE Louisiana was just about as good as the last two years versus FCS opponents. Plus, considering Jarvis Jones really was at the heart of some of Missouri's run troubles, considering he was quite often intentionally unblocked, and considering he doesn't play for any of the other teams Missouri will play (though Alabama has some pretty decent facsimiles), I'm not going to go into full freak-out mode just yet. Average <2.00 against Arizona State, however, and I might. 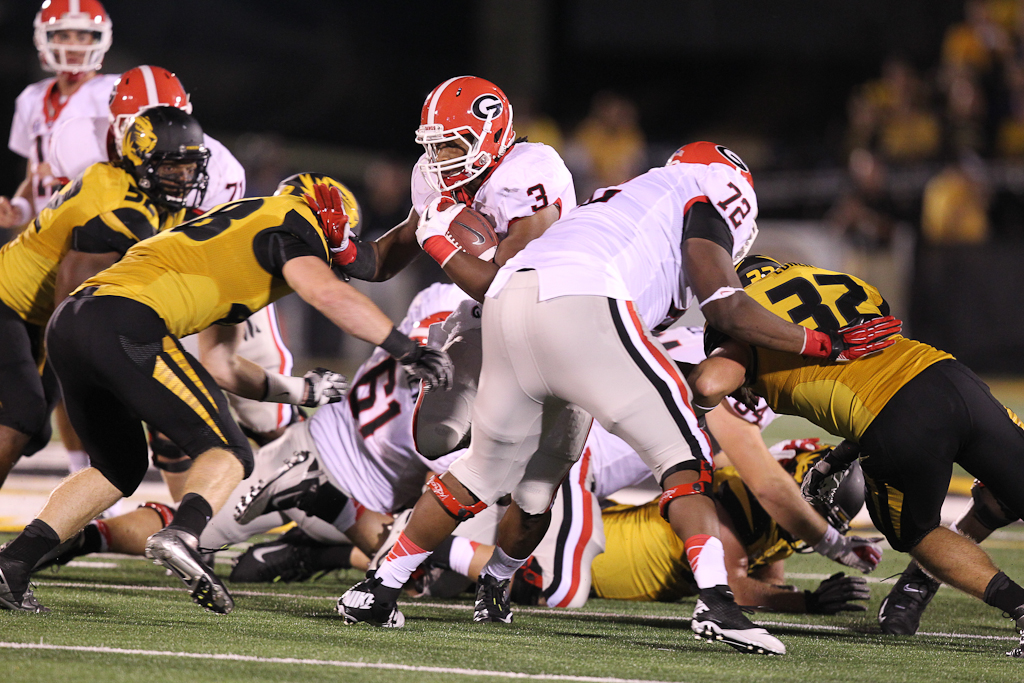 The data above should also put into perspective that Mizzou's front seven did very well to hold Georgia to 2.62 line yards per carry. And the only thing that kept Georgia above a 0.600 Rushing S&P (which isn't very good) was a single, long carry by Todd Gurley. We don't know yet whether Mizzou will be able to handle more wide open attacks like what Arizona State throws at them this coming weekend, but it is built for defending power, and it was very encouraging to see that.

As I said earlier in the week, it was clearly part of Missouri's gameplan to go to Gahn McGaffie early and often. He had a great offseason, so this makes sense to a degree. And who knows, perhaps Mizzou's willingness to go underneath the coverage to McGaffie is what helped open up the long passes to Marcus Lucas and L'Damian Washington. But while the passes may have had an indirectly positive effect ... the direct effect was pretty negative. Mizzou couldn't run the ball effectively, and the "long handoff" passes were inefficient as well. The "inside receivers" -- McGaffie, T.J. Moe, and in this game, DGB -- combined to catch 12 of 21 passes for just 84 yards, fewer than four yards per target. Georgia tackled beautifully, and with their speed, they were in position to make a tackle very quickly.

So that left Mizzou hoping for a big play. And while this game would have been completely redefined if Marcus Lucas had been able to haul in the bomb on the final play of the first half ... let's just say that saying "If only we had reeled in that Hail Mary" is probably a sign that your team didn't deserve to win.

Georgia's No. 1 receiver, Tavarres King, had a 34-yard catch-and-run when Georgia executed a perfect screen facing an all-out blitz from Missouri. Otherwise, he was targeted just three times and caught one ball for seven yards. E.J. Gaines is really, really good. Really good.

Unfortunately, Georgia's receiving corps has better depth than Missouri's secondary, even with Malcolm Mitchell playing defensive back. With King blanketed and Michael Bennett fighting Kip Edwards and company to a draw, quarterback Aaron Murray simply checked down to his big No. 3 man, Marlon Brown, a former all-world recruit from Memphis. Brown was typically either covered by a linebacker or Randy Ponder, and he is better at being a receiver than any of those guys were at covering passes. Mizzou shut down the running game for the most part and almost completely locked down Georgia's No. 1 option, but Murray and Georgia's coaches are really smart, and they found somebody to move the ball for them, even if it took a while.

It's noon on Wednesday. I guess that means it's time to move on to the Arizona State game. If the offensive line opens holes against Arizona State like it did last year, Mizzou will probably win. But if it doesn't?