Animated Drive Chart brought to you by Gameday Depot.

When You Have A Thin, Brutally Young Team...

...you struggle to play at a consistently decent level for four straight quarters. That's how this works. Gary Pinkel said after the game that this is the youngest team he's ever started, and while I'll take his word for that, it isn't difficult to see not only the young players that were involved, but the young players that have been pushed into larger roles than anybody anticipated.

Now, Missouri's 2009 team was ridiculously young as well, perhaps even younger. But for the most part that team didn't experience any sort of serious run of injuries. This time around, the young guys really don't even have backups. And when that happens ... let's just say you're infinitely more likely to fade in the fourth quarter.

And oh, has Missouri faded. The Tigers were up, 17-9, early in the third quarter against Georgia, then got outscored, 32-3, the rest of the way. Mizzou was up 24-7 heading into the fourth quarter last night, then got outscored, 13-0, in the final 15 minutes. This team closed consistently strong last year; this year, not so much.

But Mizzou won. With the lead cut to four points and seven points, the offense responded with a solid, eight-play drive to ASU's 31, and it should have continued, but an absolutely ridiculous no-call on a pretty clear pass interference penalty ended the drive. I hate complaining about officiating in these write-ups because it's just so easy to do, and because over the course of a game both fanbases find calls to hate. But wow, was that obvious pass interference, and wow, was it a huge moment. The Tigers could have taken another minute or two off the clock and either scored a touchdown to put the game away or set up a much shorter field goal to go up a full seven points; instead, Andrew Baggett missed a 48-yarder (it is worth noting, by the way, that Baggett's misses were from 37, 45 and 48 yards; small consolation, obviously, but they weren't chip shots), and ASU got another chance. 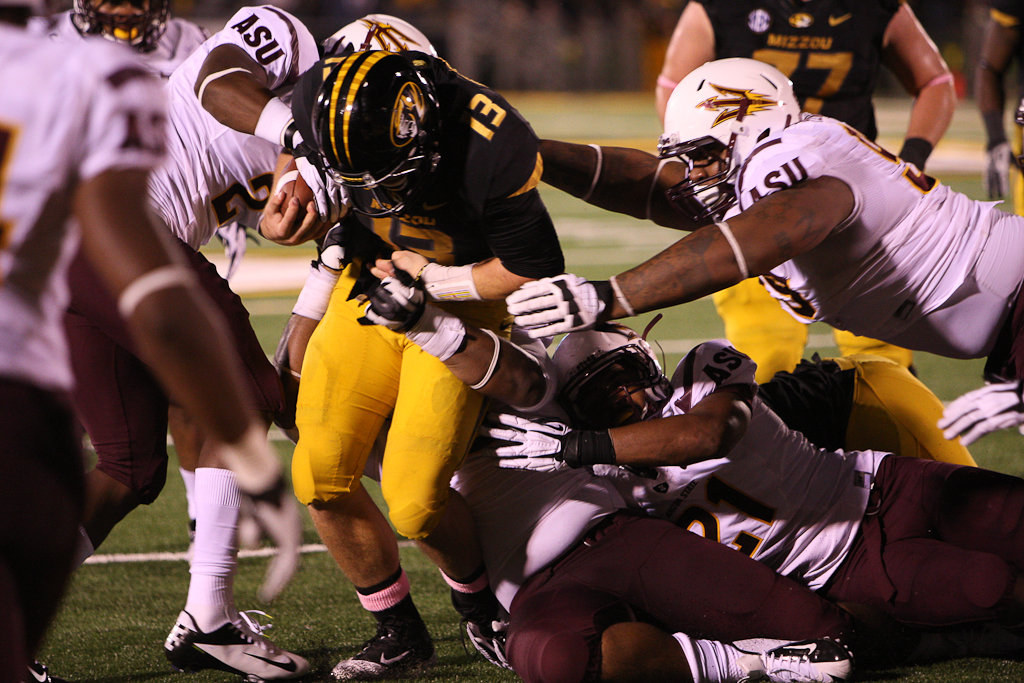 And When You Have An Offensive Line This Shaky...

...any win is a very, very happy occasion. ASU was able to get into the backfield rather consistently, and Mizzou running backs typically had to make their first move two yards behind the line of scrimmage. This is not a recipe for success against any team, much less a solid, fast Arizona State team that is probably a year or so away from being very good.

Corbin Berkstresser was dealt a very tough hand, given about one day to prepare for his first career start and facing constant pressure from a good pass-rushing team. And the more Mizzou ran it, the less it worked. More and more of the game was put on Berkstresser's shoulders, and Mizzou won. He made some terribly shaky throws (even if there hadn't been a defender there, his intercepted pass would have landed about 10 yards short of his intended receiver), he threw some absolute darts, and he helped Mizzou to a downright decent 10-for-22 performance on third downs.

Andrew Baggett booms in a 46-yard field goal to put Mizzou up, 3-0.

Andrew Wilson unloads on punt returner Jamal Miles, forcing a fumble that Kip Edwards pounces on; Mizzou drives just 18 yards for the first touchdown of the night and a 10-0 lead.

After a bad snap, Baggett misses a 45-yard field goal.

Marcus Murphy muffs a punt return but falls on it at Mizzou's 15.

Mizzou runs a perfect reverse on the next punt return. Murphy hands to E.J. Gaines, who dances beautifully for 44 yards to the ASU 18. Mizzou once again scores a touchdown off of a drive of fewer than 20 yards and goes up, 17-0.

Murphy loses his bearings and backs up to call fair catch on a punt at the MU 7 instead of letting it bounce.

Baggett misses a 37-yard field goal after a marginal hold.

A bad snap results in an 11-yard punt for Arizona State. Mizzou drives just 33 yards for its third touchdown of the day and a 24-yard field goal.

A terrible snap to Trey Barrow results in a six-yard loss, and ASU takes over at Mizzou's 36. They take advantage of the short field, needing nine plays to score and make it a 24-14 game.

Baggett misses a 48-yarder. The hold is iffy again, and the kick is worse.

Following a Mizzou goalline stand, the offense goes three-and-out, and Barrow boots a terribly low punt; Jamal Miles returns the ball 25 yards to Mizzou's 21, and the defense is forced to make another stand.

That's seven special teams plays that benefited Mizzou considerably ... and six that either benefited Arizona State considerably or, in the case of Murphy's muffed punt, could have. Pretty much the definition of a roller coaster. Special teams could have turned this into a blowout in either direction; instead it basically canceled out. Either way ... stressful. Very, very stressful.

"@gabedearmond: Are #Mizzou players wondering about James Franklin's toughness after his coach said "he didn't want to play?" no..we aren't

I've seen hints of a "He chose not to play?? LOSER. START BERKSTRESSER" meme developing online since last night, and ... my god. I said before the game that if my options were a 75% Franklin or a 100% Berkstresser, I wanted Berkstresser. Quarterbacks who try to throw through pain (especially QBs with something less than a hand cannon, and especially QBs who run as much as Franklin and would take 20 shots to the shoulder over the course of a game) do not necessarily help their team, and I'm happy that Franklin acknowledged the reality of the situation. He's proven he's plenty tough (hello, Texas A&M TD run); if he couldn't go, then I'm relieved that he admitted it.

And beyond that ... if James Franklin's family doesn't believe in taking pain medication, and that's why he chose not to take a cortizone shot before the game, then that's the end of the story. I was kind of annoyed that Pinkel told Shelley Smith that Franklin had passed on it before the game, though in fairness Smith very specifically asked him about a shot; Pinkel probably wouldn't have said anything if not specifically asked, but ... still. It added to a storyline that I'm not sure is an actual storyline.

This football program is based entirely around family, and the decisions of a player's real family are part of what comes with that. The end.

(And to Joe Walljasper, I love your work, but let's not make a big deal about T.J. Moe using the word "tough" to describe Berkstresser, huh? I'm pretty sure he's used that word to describe Franklin about 117 times. There is no "there" there.)

As always, there is more to come. And if you are using Google Chrome and are getting a "MALWARE DETECTED!" warning, know that our tech team has not found a single thing that would make your computer unsafe in some way, and they are working with Google to get things rectified. It is a very scary, annoying warning, but there is no evidence whatsoever that there is something threatening involved.