Share All sharing options for: Mizzou 24, Arizona State 20: Beyond The Box Score

As always, we turn the page on last week's game with all the stats you can stand. (And as always, it is a day later than I intended.) And as always, a) there is a glossary at the bottom, and b) if you don't care about the numbers, skip to the words.

But first ... a mini-Numerical! This week's Numerical at SB Nation contained the following tidbit. I'll add to it below.

-99. Wyoming's yardage margin in a 24-22 loss to Cal Poly. Without starting quarterback Brett Smith, the Cowboys' offense was directionless, gaining just 4.2 yards per play behind quarterback Colby Kirkegaard. Meanwhile, Missouri gained just 3.6 yards per play against Arizona State behind new (and temporary) starter Corbin Berkstresser, but they won, 24-20, thanks to turnovers, defense, and a split of miserable special teams plays. Oklahoma State, of course, fared a little better with its backup. After Wes Lunt left the game with an injury, J.W. Walsh averaged 11.6 yards per pass and 12.2 yards per carry in a 65-24 win over UL-Lafayette. OSU gained 742 yards, more than Wyoming and Missouri combined.

4.3. Average yards per pass attempt for Corbin Berkstresser in his first career start. He completed 21 of 41 passes for 198 yards and a pick, and he was sacked twice for 11 yards. This is a pretty dreadful per-attempt average, but it is difficult to fault him too much. He was pressured repeatedly, and if he had time on just two passes, his passing line would have gone from poor to downright solid. On first-and-10 from the Mizzou 7, with 11:53 left in the third quarter, L'Damian Washington was semi-open, sprinting down the right hash with a lot of room available for an over-the-right-shoulder throw. But under pressure, Berkstresser had to throw it before Washington was ready, and L'DW couldn't locate the ball in time. That play would have been good for about 35-40 yards. Then, on first-and-10 from the ASU 49 with under 10 minutes remaining in the game, an absolutely perfect play-call left Washington wide open in the secondary. With another instant to step into the pass, Berkstresser could have completed his easiest pass of the night, and it would have gone for a 49-yard touchdown. Instead, he went 2-for-5 for 33 yards on the rest of the drive, and Mizzou missed its third field goal of the night. Complete those two passes, and Berkstresser's per-attempt average jumps directly into the mid-6's to low-7's.

5.5. Tackles for loss made by Mizzou defensive linemen. Sheldon Richardson had 1.5 TFLs and 0.5 sacks (and was second on the team with 7.5 total tackles). Michael Sam had 1.5 TFLs and 1.5 sacks. Kony Ealy had 1.5 TFLs and 0.5 sacks. Brad Madison's lone tackle was for a two-yard loss. The defensive line was dominant, though MIzzou's secondary had plenty of plays, as well: E.J. Gaines, Kip Edwards, Randy Ponder, Braylon Webb and Kenronte Walker combined for 3.0 tackles for loss, two fumble recoveries, two interceptions, and three passes broken up. Walker saved his for the end: he broke up a fourth-and-goal pass with 3:36 remaining, then picked off Taylor Kelly's final pass with 0:38 left.

5.6. Points a team can expect to score, on average, when they reach their opponent's 1-yard line. Arizona State did so with under five minutes left in the game, came away with zero points, and lost by four.

10. Mizzou penalties, two of which went for 30 yards on ASU's second-to-last possession of the game. Mizzou is currently 104th in the nation, averaging 74.0 yards of penalties per game. A lot of these are of the aggressiveness variety (those are typically forgivable, as they usually result in enough aggressive, legal play to offset the penalties), but not all of them are.

14.6. Missouri's turnover points margin. Mizzou committed one turnover worth 4.8 equivalent points (Corbin Berkstresser's red zone interception), but ASU committed four worth 19.4. Turnovers and near-misses in the ASU passing game helped stake Mizzou to leads of 17-0 and 24-7 ... and the Tigers needed every single one of those turnovers to pull off the win.

21. Yards gained in five touches by Dorial Green-Beckham. I'll admit it: I really am surprised that Mizzou isn't looking to DGB a little more at this point in the season, but one also has to admit that Marcus Lucas and L'Damian Washington (combined in 2012: 38 targets, 20 catches, 301 yards, 7.9 yards per target) are doing alright in the deep and intermediate routes. Washington has been particularly impressive on passing downs: 11 targets, six catches, 136 yards (12.4 per target). DGB's time will come. And when it does, I hope Mizzou's quarterback of choice actually has enough time to throw good passes.

28. T.J. Moe's career receptions of 20 yards or more (via Mizzou historian Tom Orf). He is sixth all-time at Missouri in this category, one behind Jeremy Maclin for fifth, three behind Will Franklin for fourth, seven behind Victor Bailey for third, nine behind Danario Alexander for second, and 14 behind Justin Gage for first. I assume he will end up a pretty easy fourth, though catching Bailey will be a bit of a challenge.

45.5. Missouri's third-down conversion rate (10-for-22). This trumped ASU's (2-for-12, or 16.7%) by quite a wide margin. As we'll see after the jump, that is primarily because Mizzou had a much better success rate on passing downs than ASU did. Mizzou was also actually able to run the ball at least a little bit; ASU very much was not.

A week ago, Georgia was just a little bit better on standard downs (0.716 S&P to 0.668) and a little bit better on passing downs (0.633 S&P to 0.514), and when combined with turnover differential (plus-7.7 turnover points), it made all the difference in the world. This week, Mizzou basically fought ASU to a statistical draw, but between turnovers and better success on third downs, they won.

As against Georgia, Mizzou's patchwork offensive line did not do a terrible job of protecting its quarterback, at least as it pertains to the actual number of sacks registered by Arizona State. A sub-5% sack rate certainly isn't a disaster. Of course, the only reason the rate was that low was because Corbin Berkstresser was either throwing short passes or throwing long passes a lot earlier than he wanted to. Both James Franklin and Berkstresser do a strong job of getting rid of the ball, even if they are not completing passes. That keeps the sack rate down, but it does nothing for the offense, which is still a half-disaster.

As for run-blocking ... last week, I listed out Mizzou's performance in Line Yards per Carry for every game since the start of 2010. Mizzou's 1.09/carry average was by far its worst in that time frame. Well, against an ASU defense that had struggled to stop Illinois' one-dimensional ground game a week earlier, Mizzou averaged 2.40 line yards per carry ... which would tie it for the sixth-worst performance of this now 29-game sample. Improvement? Technically, yeah. Still far too poor? Absolutely.

The good news, of course, is that the line will improve. There is such a strong correlation between experience and improvement, and with every progressive game, Mizzou will get a little more experienced.

Et cetera. Obviously the Injury Bug could decide to strike again at any moment, but in theory Mizzou could begin to reap rewards from the "Injuries hurt in the present tense and help in the future tense" law reasonably soon. A little continuity could go a long way, as well. The South Carolina game will see Mizzou's third line arrangement in four games, and none of the arrangements will be the one we expected to see in August. 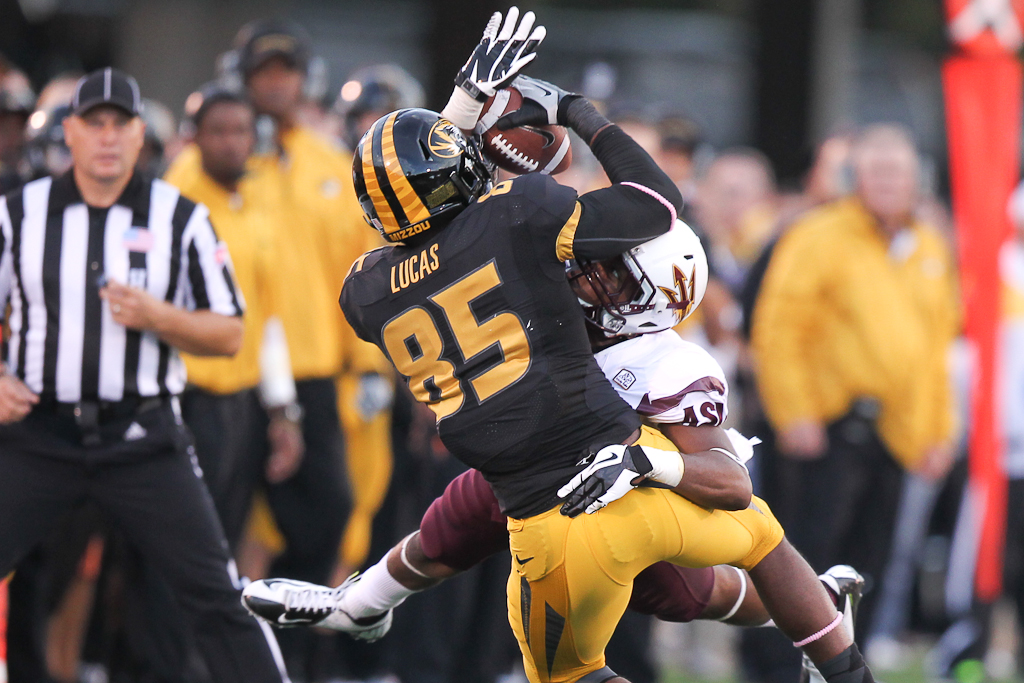 There are no apologies for a win when are in such poor shape from an injuries perspective. Mizzou beat a good team with a backup quarterback, a backup running back (technically, if we're still counting Henry Josey as the starter), three backup offensive linemen and a backup linebacker. No. Apologies.

And now we turn the page. I honestly can't see how Mizzou can beat a Top 10 team on the road with such an iffy line, but this defense might give them a shot, especially if Zaviar Gooden indeed returns.