Boy, the narrative changed about 28 times in September, didn't it? (Which narrative? All of them.)

Share All sharing options for: 2012 in review: September full of dashed hopes, new hopes and danger.

With record season-ticket sales and Mizzou's in-conference SEC debut a week away, Gary Pinkel's Tigers start the 2012 season in style, scoring 28 points in the blink of an eye in the first quarter and coasting to a 62-10 win. The easy win masks some offensive issues -- James Franklin averages just 5.8 yards per pass attempt, the line looks iffy (against FCS competition), and after the early scoring burst, Mizzou scores just once in six possessions -- but hey, that's what tune-ups are for, right? No way the offense struggles that much against real teams, right?

Mizzou Soccer, ranked 10th in the country after an impressive start in August, moves to 5-0 with a 2-0 win over Tennessee Tech. The next day, the Mizzou men's golfers will finish first at the Turning Stone Tiger Intercollegiate in New York. Soccer looks great, Volleyball looks good, the golfers are looking strong, and surely the football team will end up alright, right? All is right with the world!

Mizzou soccer drops its first match of the season, a tough overtime loss at Ohio State. The Tigers will drop to 17th in the next polls.

One has to say this much: This was a really fun day. The weather was great, the tailgating was long, and Faurot Field was buzzing for Mizzou's first ever SEC game. And the team even responded for a while. The Tigers took a 10-3 lead in the second quarter when James Franklin found Marcus Lucas behind the defense for a 41-yard score; Georgia got to within 10-9, and Mizzou came oh, so close to a bigger halftime lead when Lucas dropped a strangely catchable last-second heave to end the half.

At halftime, I turned to The Beef and said "Well, we've proven we belong; now it would be a shame not to go ahead and win the game, huh?" The second half started perfectly: Georgia went three-and-out, and on third-and-9 from Mizzou's 31, Franklin found L'Damian Washington for a 69-yard touchdown and a 17-9 Mizzou lead. 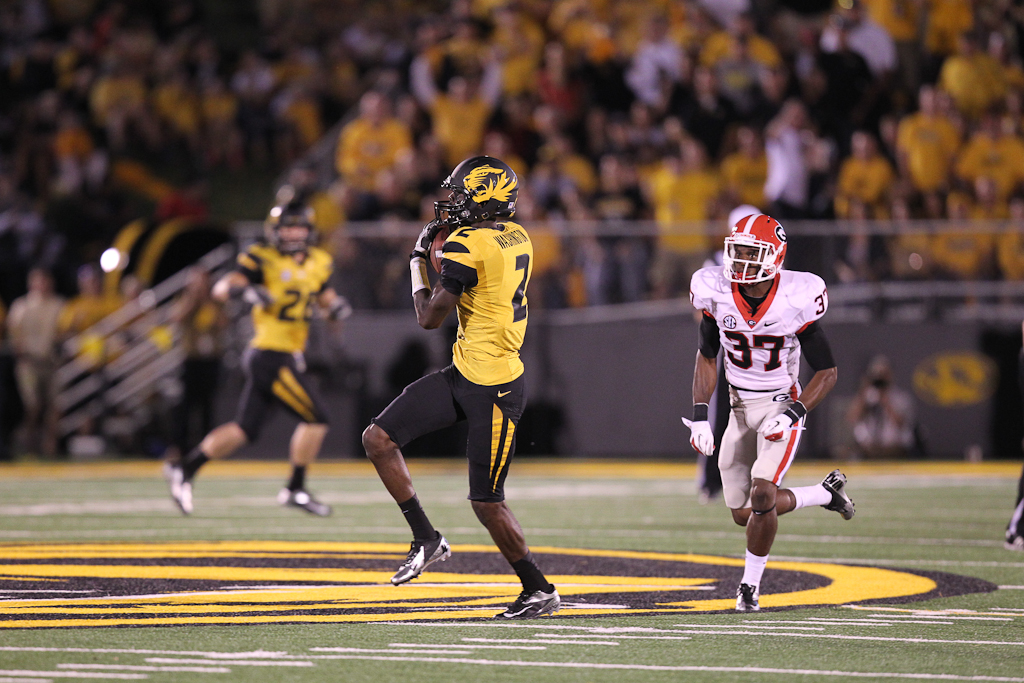 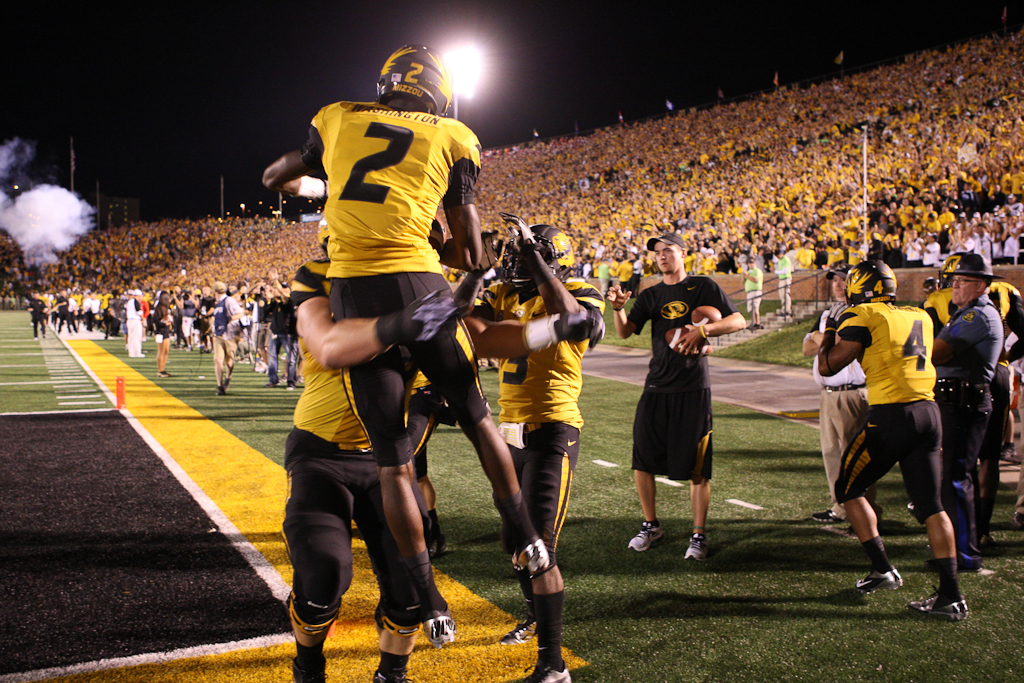 I later called it my favorite moment of 2012 because of the hope involved.

Just using the "How high did I jump off of the ground when the play occurred?" scale, this play has to be No. 1. Mizzou was going to win this game, they were going to go about 10-2, and they might win the SEC East. It didn't happen, of course. Mizzou succumbed, first to Jarvis Jones, then to James Franklin's injury, then to South Carolina, then to another James Franklin injury, then to another couple of offensive line injuries, then to Sheldon Richardson's suspension, then to Alec Lemon. But approximately six quarters into the 2012 season, it all felt like it was going to work out right.

After an upset loss to Morehead State in a tournament over the weekend, Mizzou Volleyball opens SEC play with an incredible upset. It's not just that the Tigers took out No. 17 Tennessee at the Hearnes Center, it's that they spotted the Vols two sets first, looking dreadful in the process, before charging. With a 20-25, 14-25, 27-25, 25-21, 15-9 victory, Mizzou moved to 9-2 overall, 1-0 in SEC play. It was, unfortunately, the high point of the season.

Mizzou Soccer also opens SEC play with a 2-0 win at Auburn. That news, however, is overshadowed by rumblings that James Franklin had re-aggravated the shoulder injury that had forced him to miss much of spring practice and all of the summer.

Indeed, Corbin Berkstresser made his first start as a Missouri Tiger against Arizona State. The Tigers won, 24-20, powered mostly by turnovers and defense, though Berkstresser does manage to survive a fierce ASU pass rush, one that would end up with the second-most sacks and tackles for loss in the country. A pair of late defensive stands wins the game for the Tigers; it is a win that is as foreboding as it is exciting.

Still ranked 17th, Mizzou Soccer beats South Carolina, 1-0, on the road, while Mizzou Volleyball sweeps Ole Miss in Columbia. The football season is suddenly all sorts of shaky, but the women are looking great.

Now 15th, Mizzou Soccer holds off Ole Miss, 2-1, in Columbia; meanwhile, Mizzou Volleyball is swept by No. 13 Florida in Gainesville. Call it a pair of warning signs.

Hey, speaking of warning signs ... Mizzou's first SEC football road trip, everybody! James Franklin clearly lacks confidence in his arm and performs poorly in front of a hostile defense and a hostile crowd. Mizzou avoids disaster early, but it is inevitable; South Carolina eventually pulls away for a 31-10 win. Mizzou is now 2-2 for the season.

But on the bright side, SBN paid for me to go on a road trip through "the weirdest (and most edible) region in America."

Back to No. 9 in the country, Mizzou Soccer takes out Georgia, 2-1, in Athens. Volleyball gets run out of College Station, however, losing 3-1 to Texas A&M.

Dorial Green-Beckham finished the season with 28 catches for 395 yards and five touchdowns, solid numbers for a freshman. But at this point in the season, with Mizzou standing at 3-2 and facing a home game versus Vanderbilt, things are looking pretty good. Mizzou survived September while not looking too spectacular, and it looked like DGB was about to "get it."

(A few days later, he was suspended for marijuana use and would miss the Vanderbilt game.)

Mizzou Soccer falls to 10-2 with a 1-0 loss at Tennessee. Once 10-1, the Tigers will go 4-7 down the stretch and lose in the first round of the NCAA Tournament. Mizzou Volleyball, meanwhile, sweeps Georgia in Columbia. They will also struggle in October.

September saw injuries, dashed hopes, and new hopes strewn throughout, but things looked like they had stabilized (for all Mizzou sports, really) heading into October. They had not.