Your Trifecta: Bell-Criswell-Jankovic. Nobody. But Jack618 came SO MUCH CLOSER than I thought anybody would...

So ... yeah. I don't really want to write this post, and you don't want to read it. So we'll go quickly. And again, full disclaimer: I didn't see one second of this game. I was on vacation, dammit, and since Mizzou didn't even try on the glass (according to the numbers below), I don't have to try very hard here either.

Mizzou missed a lot of shots and therefore had a lot of offensive rebound opportunities. And they grabbed three. Three more went out of bounds, so the official total was six. But they actually went up and grabbed three. Even without Laurence Bowers, even without much of Earnest Ross, that is incredibly unacceptable no matter who the opponent is. Three.

Honestly, as we'll see below...

Patric Young is excellent (and healthy) on the interior; he is one of four Gators averaging at least 11 points per game, and he's a solid shot blocker. But of Florida's three primary bigs, he's the only healthy one. Murphy is limited with a rib injury, and Yeguete might or might not play. With Prather out, one should probably expect quite a bit of four-guard play from Florida, which could give the Gators plenty of speed around the perimeter but could lead to an advantage on the inside if Alex Oriakhi is playing well and Mizzou is getting anything from players like Tony Criswell and Stefan Jankovic.

Actually, let's put it another way: If Mizzou is going to win this game, the Tigers have to create an advantage on the inside. It's hard to do without Laurence Bowers (who, at this time, is still a question mark), but it isn't impossible. And it is an absolute necessity.

Mizzou was minus-4 in terms of expected offensive rebounds, blocked one shot (Florida blocked seven) and shot a dreadful 40 percent on 2-pointers. There was, uh, no strength down low.

It is quickly becoming the key to Mizzou games. If Jabari Brown and Earnest Ross can make at least 40-50% of their shots from the field, Mizzou can hang with just about anybody. They made 25% against Ole Miss, however, and Mizzou was lucky to stay within 20 points. If these two are making their jumpers, Phil Pressey has some lovely drive-and-dish options and can quickly start pulling a defense's strings. But if they aren't, then Pressey starts taking more shots from long range, and Ross starts forcing the issue (rarely a good thing), and ... bad things happen. There will likely be a hand in the shooter's face on most jumpers against this Florida team; but Mizzou will have to make those jumpers regardless. 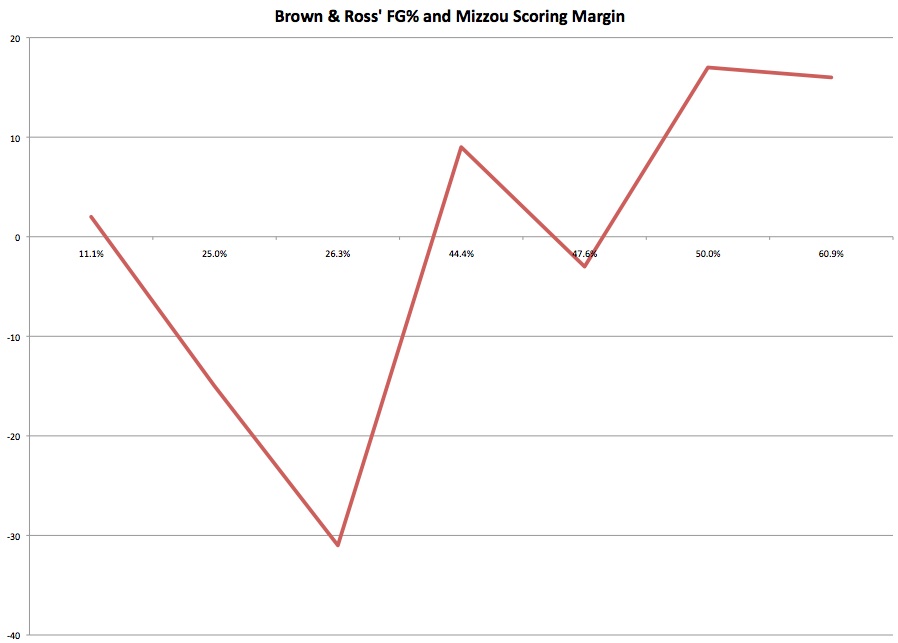 Mizzou has played seven "real" games since Jabari Brown became eligible. The Tigers are 1-2 (with two bad losses and a narrow home win over Bucknell) when Brown and Ross shoot under 30 percent and 3-1 (with a win over Illinois and two bad opponents and a narrow road loss to UCLA) when they shoot over 40 percent. They don't have to be good, but they do have to be better than awful.

Despite a terribly slow pace, Florida is forcing nearly 15 turnovers per game. As we've discussed a few times this season, Mizzou is not a team that is going to create a ball-handling advantage in most games, but in each of the Tigers' three losses, they were absolutely devastated in this category. That simply can't happen if Mizzou is to beat a Top 10 team on the road, even one that is rather dinged up.

The pace was actually rather brisk in this one, but despite double-digit steals, Mizzou still got completely smoked in the ball control game. In every facet of the game, actually.

That's all I've got. Feel free to add thoughts below, but it's already time to move on to the South Carolina game. Thank goodness for that, I guess. I don't want to be too hard on this team since I didn't see the game, but ... wow, was this about as awful a box score as I've seen in a while. That it was awful in a "Florida is a ridiculously good team that played ridiculously well" way is forgivable. But the rebounding stats, and the fact that the Tigers couldn't win a single aspect of the game (other than FT%, I guess), is not nearly as forgivable. Injuries and the Mike Dixon saga have crushed this team's depth, but ... okay, fine, let's just move on. Whip South Carolina, and everybody will feel better.

Missouri is 11-6 in SEC play, with a chance at second place