The Tigers made sure that I would have plenty of stories to tell. It will be a while before I fully recover from my stay in Athens.

Share All sharing options for: Mizzou 41, Georgia 26: A Trip Diary

I arrived in beautiful Athens, Georgia around 8am local time groggy and in need of a drink. After driving around the campus a bit and seeing the sights, my five friends and I found a spot in a parking garage and made our way downtown.

9:00am - We asked a few of the locals where the best bloody marys could be found and were pointed in the direction of an establishment called The Taco Stand. It's a quaint little bar with a misleading name that is located in a building and is in no way a stand. Once you overcome the fact that you were lied to by the bar's name however, you can begin to realize why it's such a popular place. The bloody marys were fantastic (and spicy, which is my jam) as were the quesadillas. This also turned out to be the perfect venue for watching College Gameday. It wasn't incredibly crowded and you could clearly hear everything ESPN's pundits were discussing. We stayed for a bit to see if Corso would let some cuss words slip and then left to meet up with another group of friends.

10:30am - In case you didn't know, Athens is home to roughly 16,000 different bars. This made finding our friends a bit difficult, but eventually we stumbled upon a little hole-in-the-wall named Genco Import Co. Going in, I thought the minuscule bar would be no more than a rendezvous location, but it turned out to be a pretty fun time.

12:00pm - Game time. We had been asking around all morning trying to find out what bar would be optimal for football viewing, and probably two-thirds of the natives we polled pointed us in the direction of the Georgia Theatre. I would like to personally thank all of them, because it was probably my favorite place we went all weekend. The theatre is huge, with three levels of seating (each with its own bar) and a rooftop bar/grill. We situated ourselves on the third floor, grabbed some drinks, and settled in for the game. Ever watched the Tigers beat a top ten team on the road on a screen as big as your garage? If you haven't, I cannot suggest it enough. I leaned out over a railing to give you guys an idea of how the place lays out: 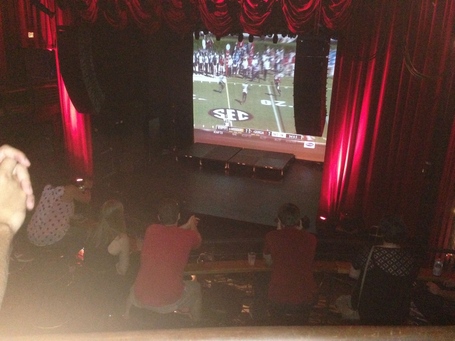 By itself, the Georgia Theatre an awesome place to take in the game, but add on the fact that many local celebrities frequent the bar and it goes from great to astounding. I have to admit, talking smack to Pastor Troy is quite entertaining. Even though the rapper was upset with his Dawgs' performance, he was a good sport and was happy to let me snap a picture of him with a few of my friends. 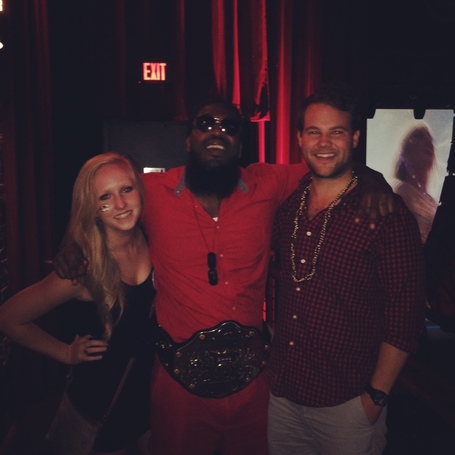 The Georgia patrons were very accommodating, and even took the time to congratulate us after the game was in hand. This was the general theme throughout the weekend as well. Huge shout out to all of the Dawg fans that made all of Athens a warm, welcoming place to visit.

3:45pm - Our group exited the Georgia Theatre in search of sustenance. The good Pastor demanded that we head to an Athens staple, The Grill. This burger joint is a blast from the past that's known for its burgers and its feta cheese fries. I ordered a cajun burger with a side of those famous fries and let me tell you friends, they did not disappoint. Take a look at the juicy goodness: 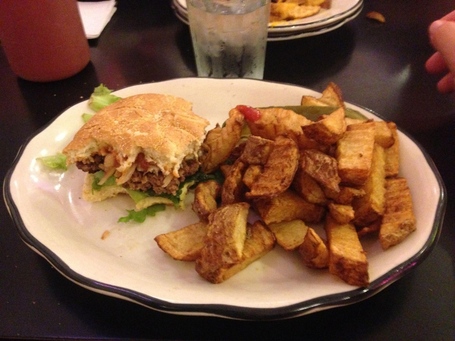 I'm already having withdrawals. If you're ever hungry in Athens, you need to give this 60's style diner a visit.

4:30pm - After filling our bellies with burgers, we set off to find somewhere to watch the late games. After popping in and out of a few packed venues, we settled on a bar called Magnolia's. There really wasn't anything special about the bar, but the drink prices were cheap and there were plenty of TVs to watch. Since it stayed relatively uncrowded, we ended up spending a good chunk of time there reveling in our win.

7:00pm - At Magnolia's, we met a few Georgia fans that agreed to give us a short tour of the campus. We strolled around the stadium and eventually ended up at a tailgate that was apparently going to be rocking late into the night. We engaged in a few friendly competitions with the tailgaters and then made our way back downtown.

9:00pm - It was time to decide on what bar we would be spending the rest of the night at. We consulted with a few Georgia student and settled on The Silver Dollar Bar. It was a fun venue with good, live music and enough TVs to catch the end of the A&M-Ole Miss game, but other than that there was really nothing special about it. I was a bit underwhelmed, but then Arthur Lynch, Aaron Murray, and three of Georgia's offensive linemen walked in the bar. They high-fived a few fans on their way up to a more private area on the second level of the bar, the very area where my friends and I were sitting. We decided to leave them be though, as they would've been none too happy with some Tiger fans trying to sneak a photograph of them at a bar.

All things considered, Athens makes for one of the best gameday experiences I've ever had the pleasure of partaking in. The fans were friendly and welcomed us to their home with open arms, the downtown layout was amazing with tons of good food and drinks to be had, and we were able to take home a few stories that we'll be recounting for a long time. 10/10, would stay again.