Mizzou moved to 7-0 with a victory over the Gators of Florida and can begin dreaming about a trip to Atlanta.

Share All sharing options for: Missouri 36, Florida 17: It's Officially Mauktober

Mizzou is officially in the driver's seat of the SEC East and are very much in the race to get to Atlanta. Maty Mauk looked like a (redshirt) freshman at times, but he played far beyond most peoples' expectations and gave Tigers fans reason to believe Mizzou will be just fine until Franklin returns. The running game looked good and our receivers continue to show they're one of the best units in the entire country as the Mizzou offense racked up 500 yards against one of the best defenses in the country. Michael Sam (MALICE HAMS) and the defensive line controlled the line of scrimmage, opening things up for the rest of the defense to make some plays and extend the turnover streak to 37 straight games. Just sit back, Tigers fans. Enjoy the fact that your team is undefeated through seven games and is very much relevant again. Enjoy the fact that we can look at any game on the schedule and expect to compete. Enjoy the fact that everything that was said about Mizzou not being able to win in the SEC has been wrong. Enjoy the fact that we're still capable of beating  a ranked opponent even though our starting quarterback has been injured. This is a more than just a good team, this is a special team and a special season. 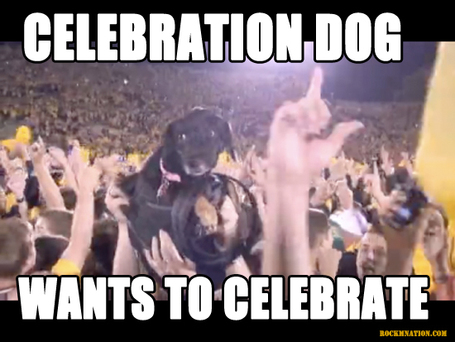 <blockquote class="twitter-tweet" data-partner="tweetdeck"><p>It is at this time we would like to humbly request that <a href="https://twitter.com/CollegeGameDay">@CollegeGameDay</a> come to Faurot Field next week for Homecoming vs. South Carolina</p>&mdash; Rock M Nation (@rockmnation) <a href="https://twitter.com/rockmnation/statuses/391649426659225600">October 19, 2013</a></blockquote>