Anatomy of a big play: Mauk to Hunt for 52 Yards

In an effort to accentuate the positive, a few words about the catch and run in the third quarter.

Share All sharing options for: Anatomy of a big play: Mauk to Hunt for 52 Yards

Fullback U posted a very nice bird's eye view of Mauk's performance yesterday. Check out the dual .gifs on Hunt's 52 yard catch and run if you've not already done so. Take particular note of the all-22 view in the second .gif.

I want to focus on that play.

It is worth noting here as an aside that I'm a huge fan of Brock Huard's Chalk Talk segment available on YouTube. He breaks down plays on the whiteboard by the Seattle Seahawks. The segments are valuable to any football fan. Huard talks about three fundamental ingredients of plays: (1) players, (2) formations, and (3) plays (i.e., design). The first is about talent. The second is about generating favorable matchups based on alignment. The third is about choreographing space via design.

I want to highlight all three aspects in Mauk's pass to Hunt to point out a couple things about Mauk.

By now, you know the situation. Missouri dominates the first half but is only up by 10 at the half. Florida returns the opening kickoff of the second half for a touchdown to narrow the lead to three points. Throats are tightening all over Columbia, MO.

Enter Mauk and the offense.

A run for 12 yards on what looks to be a wide zone play shows us that the Gators, while perhaps emotionally energized by the kickoff return, were nevertheless little match for the Tigers' offensive line. The run gives Missouri a first down and sets up the throw to Mauk.

Missouri comes out in shotgun, 11 personnel (1 TE, 1 RB) with two WRs on the weak side. Florida is in nickel, in what looks to be twin safeties with zone underneath. The strong side safety (circled) then drops down at the snap to cover the TE, Waters. 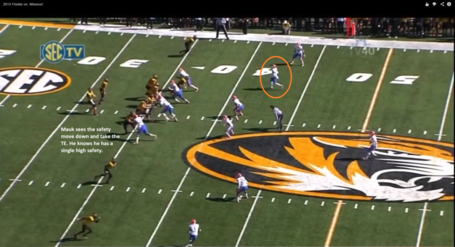 As Mauk receives the ball, if not before, he knows he has a single high safety. He should know that his primary read is Hunt in the slot (lower hash). His second read is TE Eric Waters (releasing, just above the upper hash). He can also dump it off on the sideline to DGB (top) or LDW (bottom) if he is pressured. I don't know Missouri's offense, but Mauk's reads should go in that order, especially with the ball starting on the left hash. The play design leaves Hunt available to work the wide side of the field outside the numbers against a single high safety. Again, Mauk should know all this at the snap if not before.

Watch what he does. 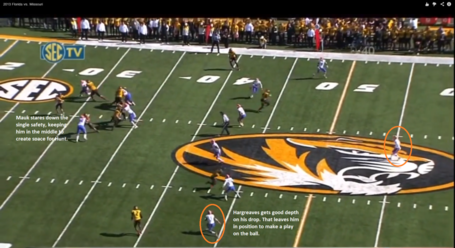 Mauk stares down the safety. That forces him to squat in the middle. Note that the safety has moved back a couple steps but neither left nor right. Mauk has held him in place, creating time for Hunt to get to the open area. Now, I also have to note here that the protection is fantastic. Mauk sits inside a pristine pocket waiting for Hunt to clear the first level of the zone. Meanwhile, Florida has some players of its own. Highly-touted recruit Vernon Hargreaves III (circled) makes a pretty good read on this play. He's putting himself in position to make a play on any pass in his area. 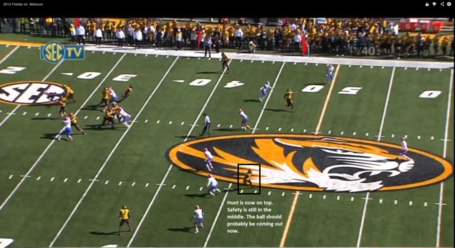 I suspect that the ball should be coming out now. I'm not surprised that Mauk holds it an extra eighth of a beat. He is still getting to know his receivers. On a play like this he is waiting for Hunt to settle into the open area and show numbers. As Mauk develops experience and chemistry with these receivers he will presumably be able to anticipate where Hunt will sit. The play is open.

But, the troublesome Hargreaves is sitting there. 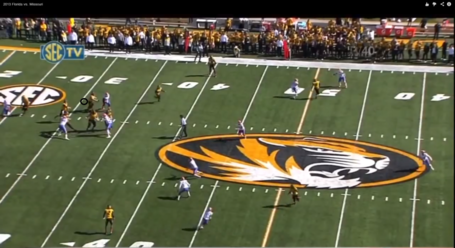 As you can see, the ball (circled) is out of Mauk's hand. The free safety, who started a step below the Tiger's eye, now has one foot out of the circle and is only just now moved in Hunt's direction. The formation and personnel put Florida into nickel. The play design creates space for Hunt.

Mauk delivers a grown man's throw. He is standing on the left hash at the MU 35 and the ball hits Hunt past the right hash, close to the numbers at the 55. Although the ball did not travel a Herculean distance, Mauk puts it on a rope. At the moment the ball is released Hargreaves has a more-than-fair chance at the pass. 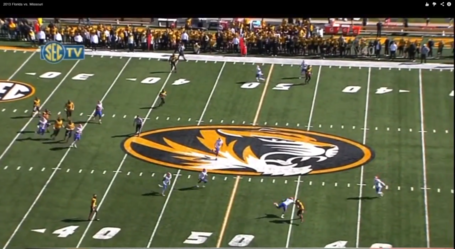 At the moment of the catch you can see how close Hargreaves came to at least breaking up the pass. That throw had some big time RPMs. It needed every one. I doubt seriously that Aaron Murray could make that throw. Now, he'd let it go earlier so as not to need to make the throw. That's another story.

Mauk obviously had a good game. This is but one play out of dozens, some of which did not turn out so well for him. So I won't even pretend to project based on one game. Instead, I'd rather highlight two of his rather endearing traits. What those traits mean for the Tigers in the coming weeks is only just now coming into focus.

1. Mauk has serious arm talent. I don't know enough about it to say whether it is elite arm talent. I feel confident to say that the entire passing offense is and should be open to him. He looks like he can make every throw, including those that require a bit of touch. The touchdown pass to Bud Sasser, for instance, was a beautiful display.

For Mauk to be making these kinds of throws in game one is pretty damned heartening. Now, having a serious arm isn't all sunshine and roses. Missouri fans will likely have to live through Mauk learning the hard way which windows are too small.

2. Mauk has good eye discipline. He stared down a few receivers in the first half, leading Florida defenders right to the ball (including a potentially game-changing pick). His second half adjustment says to me that in that first half he probably thought he was only peeking, not full-on staring receivers down. Then he learned. The way he froze that safety on the pass to Hunt -- giving him nothing -- was pretty darned impressive.