Tragedy on the Ozark Trail

Share All sharing options for: Tragedy on the Ozark Trail

The following is a story I wrote a couple of weeks ago which has absolutely nothing to do with Mizzou sports – but it is something that I have been involved deeply with and which has taken a great deal of my time. I apologize for not submitting more to RMN, and hope to pick up a better pace. Maybe my intro will help explain this better. I understand this entry is off-topic and have no problem if you are unable to use it.

When I moved back to Southeast Missouri to semi-retire, I contracted with the owner of the local weekly newspaper in my native Reynolds County to help with its publication on a less-than-40-hour-per-week basis. After my heart attack and bypass surgery in March 2007 I retired completely, only to come back to train-in new reporters the few times that changes were made – and enjoyed "getting my feet wet" from time to time.

Interestingly enough, in these retirement years, our county has made national news three times, and each time I was in the process of training new people and, thus, had the responsibility of reporting locally on the national events: the Taum Sauk Reservoir failure in December 2006 which washed out Johnson Shut-Ins and nearly killed a park ranger and his family; the December 2012 death of two young children in a meth-house fire in the small Reynolds County community of Bunker (and I have not written a lot, yet, about this matter since there is still an ongoing criminal investigation taking place in the matter); and the Jan. 12, 2013, death of a father and his two sons on the Ozark Trail, just seven miles north of my home.

Following is my original article in the local paper concerning the most recent incident. I will be doing a followup of the incident in the next week or two if I can get an expected interview with the wife and mother of the deceased. 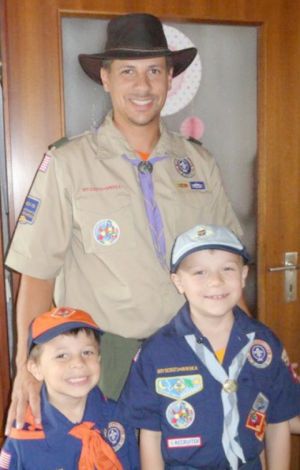 A father and his two sons from Millstadt, Ill., a southeast suburb of St. Louis, died from the cold over Saturday night, Jan. 12, on the Ozark Trail in Reynolds County, Sheriff Tom Volner reported Sunday.

The three were found Sunday morning – 24 hours after they left on a 6- to 8-hour hike – on the Trail just south of J Hwy, and about a mile north of the turnoff to the Brushy Creek Trailhead. Their 4-month-old Labrador retriever, Bear, was still alive and staying beside them.

David Decareaux, 36, was pronounced dead at the scene by Reynolds County Coroner Jeff McSpadden. The two boys — Dominic, 10, and Grant, 8 — were carried out of the woods by emergency personnel while others administered CPR.

They were pronounced dead about 2 p.m. Sunday at SoutheastHEALTH Center of Reynolds County in Ellington.

Volner said that extensive searches in the dark by horseback, on foot and by vehicles on back trails and county roads had failed to turn up the missing father and sons Saturday night.

The Decareaux family had traveled to Reynolds County for a family trip to go camping and hiking. The weekend trip was a surprise anniversary gift for Decareaux’s wife, Sarah, and the five children.

Decareaux had the weekend off from his new job with the Department of Defense (DOD) at Scott Air Force Base, and he surprised his wife with a cabin rental for the family at the Brushy Creek Lodge and Resort.

In preparation for the trip, the avid hiker spent time a couple of weeks preparing for the weekend, including the choice of where to hike.

He chose the upper leg of the Karkaghne Section of the Ozark Trail, which leaves either at the J Hwy. Trailhead or the Brushy Creek Trailhead and travels south to Suttons Bluff (either 11.5 or 8 miles, depending on which trailhead is used.)

The family stayed at Brushy Creek, so the hike would be about 16 miles down to the Bluff and back.

Leaving from Brushy Creek meant they had a half-mile walk to get to the Ozark Trail, and then approximately 7.5 miles on down the trail to the Bluff.

"That was just something they would do," his father-in-law, Keith Hartrum, of Waterloo, Ill., said. "They are very adventurous."

Decareaux, who was born in Louisiana, recently joined the DOD following a 10-year career in the Air Force.

In July 2012, he joined the Defense Information Systems Agency NetOps Center at Scott Air Force Base, which provides computer security and support for the government, according to the Air Force.

"Dave was a very important member of our team, and we are deeply saddened by the sudden and tragic loss of him and his sons," Army Col. John McLaughlin, commander of the Defense Information Systems Agency, said in a written statement. "Our hearts go out to his wife and surviving children, and we will be by the Decareaux family’s side as we mourn the loss."

The Decareaux family recently bought a home in Millstadt to be close to his job after living on-and-off in Germany for the past decade, Hartrum said.

"David was a very good father and a good provider for his family," Hartrum said.

Friends and family members described David as an attentive father. Dominic and Grant were active with their father in Cub Scouts. A few years ago, David founded a Cub Scout pack at Robinson Barracks, an Army installation in Stuttgart, Germany.

Bryan Beisner, the assistant Cubmaster of the pack in Stuttgart, said David had led Scouts on camping trips and in hiking, archery and other outdoor activities.

"He wanted to be able to share with children his experiences, and just to enjoy life," Beisner said.

Dominic and Grant were playful, well-mannered boys, he added.

"Every time you came around them, they were energetic and always wanted to play," Beisner said. "They’d always make you smile, no matter what was going on."

About 10:30 a.m. Saturday, the father and two boys set out for the hike to Sutton’s Bluff.

"When they took off in the morning, it was near 60 degrees," Volner said.

Decareaux had on a light jacket, one son wore a fleece pullover and the other a sweater.

The weather report Saturday morning called for the temperatures to start dropping in the late afternoon, and rain or snow starting between 3-3:30 p.m.

The cold front was expected to pass through the area and be gone by 8 p.m., leaving colder temperatures and possibly some snow or ice.

The hikers made the first eight miles to the Bluff in good time – somewhere a little over three hours for the eight miles.

"They were last seen by a passer-by at about 2 p.m. (Saturday) on top of Sutton’s Bluff," Volner said.

The weather report was wrong.

A front that stretched across the nation on a diagonal line from the Great Lakes to the Gulf of Mexico had been moving east. By mid-afternoon it had stalled in its easterly direction and was moving toward the northeast.

That put the ‘spine’ of the front directly over Reynolds County.

Instead of starting at 3 p.m., rain began to fall in Centerville shortly after 1 p.m. – and it did not stop until mid-morning on Sunday, long after the 8 p.m. projection.

As the three hikers were making their way home that afternoon and evening, heavy rain set in, and when night arrived, the temperature plummeted into the 20s.

There was only one creek crossing of significance on the section the three were traveling, but by the time the search party arrived to look for them that evening, the creek was up to the horses’ bellies – a lot of fast-moving water for a man with two small boys and a dog to cross.

The Ozark Trail is a 2-foot-wide, hilly path, covered with a carpet of leaves. There are reflective markers on trees for direction, but they aren’t visible in the dark.

"It’s well-marked and well-maintained," said Matt Atnip, executive director of the Ozark Trails Association, a volunteer organization that maintains the trail. But "when it’s dark out there, it’s dark. You can’t see anything."

The trail markers are made of reflective material, but there was no moon or stars on this night to give light to reflect; even satellite signals were unable to get through the cloud cover that night, leaving most of the county without television service – and Decareaux without a way to see the reflective signs once his flashlight and cellphone batteries died.

The hikers should have been back to the cabin by dark if all went well – but they were evidently unable to make it to the turnoff for the Brushy Trailhead before dark, and may have passed without seeing it, for they were found the next morning more than a mile farther up the trail.

It will never be known exactly what transpired on the trail that night.

Two-and-a-half miles farther up the trail it crossed J Highway – but to reach the highway one would have to ford Brushy Creek, and it had swollen to a fast-moving river by that time.

The father and boys were found about halfway between the Brushy Creek Trailhead turnoff and the J Highwaay Trailhead.

If they could have found the turnoff, they would have been within 20 minutes of a warm cabin.

A Search in the Dark

She said that her husband and the boys knew to hunker down in similar bad weather situations and were experienced hikers. However, as the hour grew later, they became concerned.

The sheriff’s department organized a search party of about 50 people to scour roads and woods.

They searched until about 12:30 a.m. Sunday, when the official effort was called off because of fast-rising creeks and flash flooding on roads and creeks. The Beckers and some of the others continued the search on their own, George on horseback searching the trail, and JoAnn in her car at the J Highway Trailhead hoping the hikers would come that way – but to no avail.

In the morning, the sheriff put out announcements on a local radio station for additional help. It had rained all night, and when the hikers were found, around 9:30 a.m., their clothing was soaking wet.

"We get lost hikers all the time, but we have never had this happen," Volner said in an interview Sunday night.

As the ambulance raced the children to the hospital, emergency workers tried to warm the two young bodies and continued CPR – they had just had two young children burn to death in a house fire five weeks earlier, and were going to do everything possible to save these two.

Once the children were in the hospital and getting help from the hospital staff, ambulance personnel, firemen, Highway Patrolmen, county deputies, and first responders lined up in the hall outside the emergency room awaiting their turn to keep the CPR going while the little bodies were warming.

"I want to give a big thank you to all the people who helped, to the workers at Brushy Creek Lodge, to everyone, for trying to find them, for CPR, for everything," Sheriff Volner said of the search and rescue attempts.

"They took my babies and worked on them for more than two hours," Sarah Decareaux said of the life-saving efforts put forth by emergency personnel gathered at the hospital.

She said she wanted all the people who helped search for her husband and sons to know how appreciative she is.

She said some of the rescue personnel prayed with her during the search on Saturday night.

"God is everything I’ve got right now," she said on Monday. "We are a Christian family, I know where they are now."

One who would not understand words of thanks would be Bear, the family’s dog.

But he definitely would deserve being thanked, because it was probably his familiar warm breath, warm wet tongue on the cheek and soft concerned whine that his three friends would have experienced last before yielding to the deathly sleepiness of hypothermia.