It's been a pleasure, seniors

Share All sharing options for: It's been a pleasure, seniors

It's not quite supposed to happen like this. A year ago, we said goodbye to a senior class of basketball players that was deep, successful, and as likable as any in memory, the fivesome of Marcus Denmon, Kim English, Ricardo Ratliffe, Steve Moore and Matt Pressey. When you lose a class like that, you hit the reset button. Maybe you go ultra-young and struggle through the first few months of a tough season like Vanderbilt. Maybe last year's backups and a batch of freshmen are able to patch together just enough good play to reach the postseason, but even in that instant, you probably aren't saying goodbye to much of a senior class the next year.

In 1994-95, Norm Stewart pulled off one of his greatest coaching jobs. He was coming off of perhaps his most successful campaign, a 27-4 run that included an undefeated Big 8 regular season and a trip to the Elite Eight, but he had to replace a seven-man senior class -- Melvin Booker, Jevon Crudup, Lamont Frazier, Mark Atkins, Chris Heller, Reggie Smith and little-used Jed Frost (though if we count Frost, then we have to count Jarrett Sutton among last year's seniors). Plus, he lost sophomore star Kelly Thames to a knee injury before the season began. Somehow, behind just two seniors (Paul O'Liney and Marlo Finner) and a ton of underclassmen, Mizzou surged to 18-3 and ninth in the country. They lost five of six to end the regular season (three by five or fewer points), however, and limped to an 8-seed in the Tournament. They beat Indiana in the first round, and ... I don't remember what happened after that.

In 1995, Stewart found a youth movement that worked. In 2013, Frank Haith pulled off a different kind of magic act: he imported a new, useful senior class.

There are plenty of reasons to criticize Haith's coaching this season, particularly as it pertains to late-game tactics. His personnel has not perfectly matched his philosophy, and he has not really adjusted to that. But despite a lengthy series of terribly late, frustratingly close losses, his second season in Columbia has featured a Top 20 performance on paper and a fifth straight NCAA Tournament appearance. He did this despite losing 81 percent of last year's minutes, 85 percent of its points, and 94 percent of its rebounds. He did this despite losing Mike Dixon, on whom this team expected to lean in close, late situations. He did this despite not having a backup point guard. He did this despite losing Laurence Bowers for five games (and needing another few games to get him back up to full-speed), despite missing Keion Bell and Tony Criswell for a few games, and despite not getting Jabari Brown available until nine games into the season. With a lineup in flux, a batch of players who had never shared the court until this season, Missouri has won another 23 games. The Tigers have won at least 23 in each of the last five years.

Judge Haith for some questionable in-game decisions if you want. He deserves at least a little bit of the criticism. But take the time to step back and realize how unlikely it was that this team would be any good at all. He would have been forgiven if he loaded up on freshmen and started building the program in his image as quickly as possible. Instead, he crafted a solid, interesting (and, yes, frustrating) team out of nearly whole cloth. And he deserves incredible praise for that.

The best compliment I can give to Keion Bell and Alex Oriakhi is that it hurts me to lose them this quickly. These two players have old-school games and enjoyable personalities, and I feel victimized that I don't to watch them grow over four years. They just showed up, they made all the difference in the world to this team, and soon they're leaving. 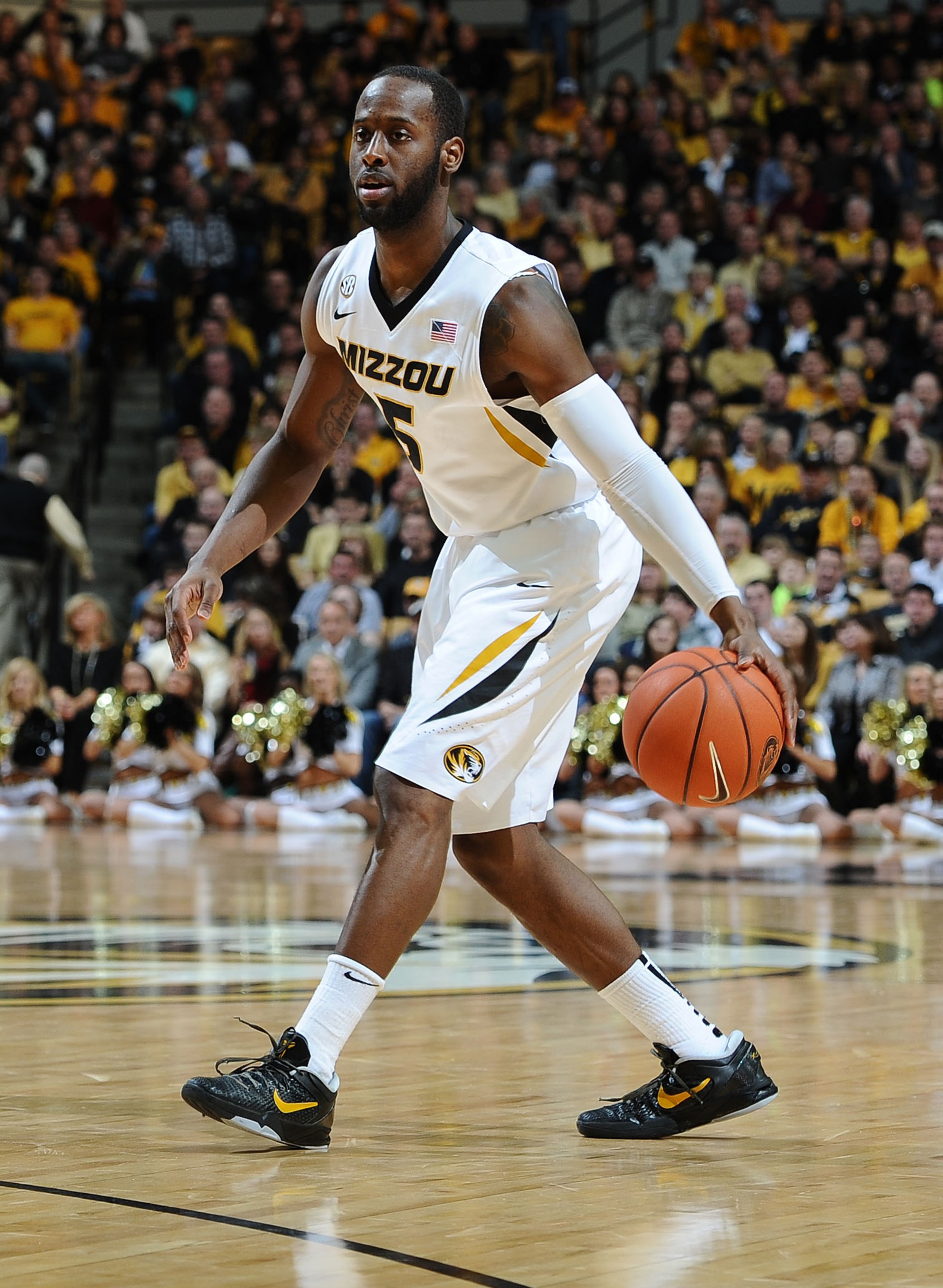 Keion Bell runs like an old man -- chest puffed out, strained facial expressions. He also brings to the table a game that would have fit well with Norm Stewart. He is a shooting guard who doesn't really shoot from the field. He attempted just 39 3-pointers this year. He slashes, he defends, and he fills whatever role he is asked to fill. He isn't a point guard, but he has played that, too, at times. When Laurence Bowers went down with the same strained MCL that afflicted about half of the football team this season, Bell picked up the scoring load. He played just four minutes against Alabama, in the game that saw Bowers get hurt. He had been mostly ineffective and lost of late. But after scoring 0, 2, 17, 1, 12, and 4 points in the six games before Bowers' absence, he scored 11, 14, 14, 12, 24, 12, 21, 24, and 25 in the nine that followed. Players don't make sudden surges late in their senior season, but he did. And in part because of his own play, this former three-star recruit who chose the nearby Pepperdine Waves over Frank Haith's Miami Hurricanes five years ago, gets to experience the NCAA Tournament as a player for the first time. He has hit a slump of late -- 22 points in four games -- but if he plays well in his only tourney, he could make an extraordinary difference. 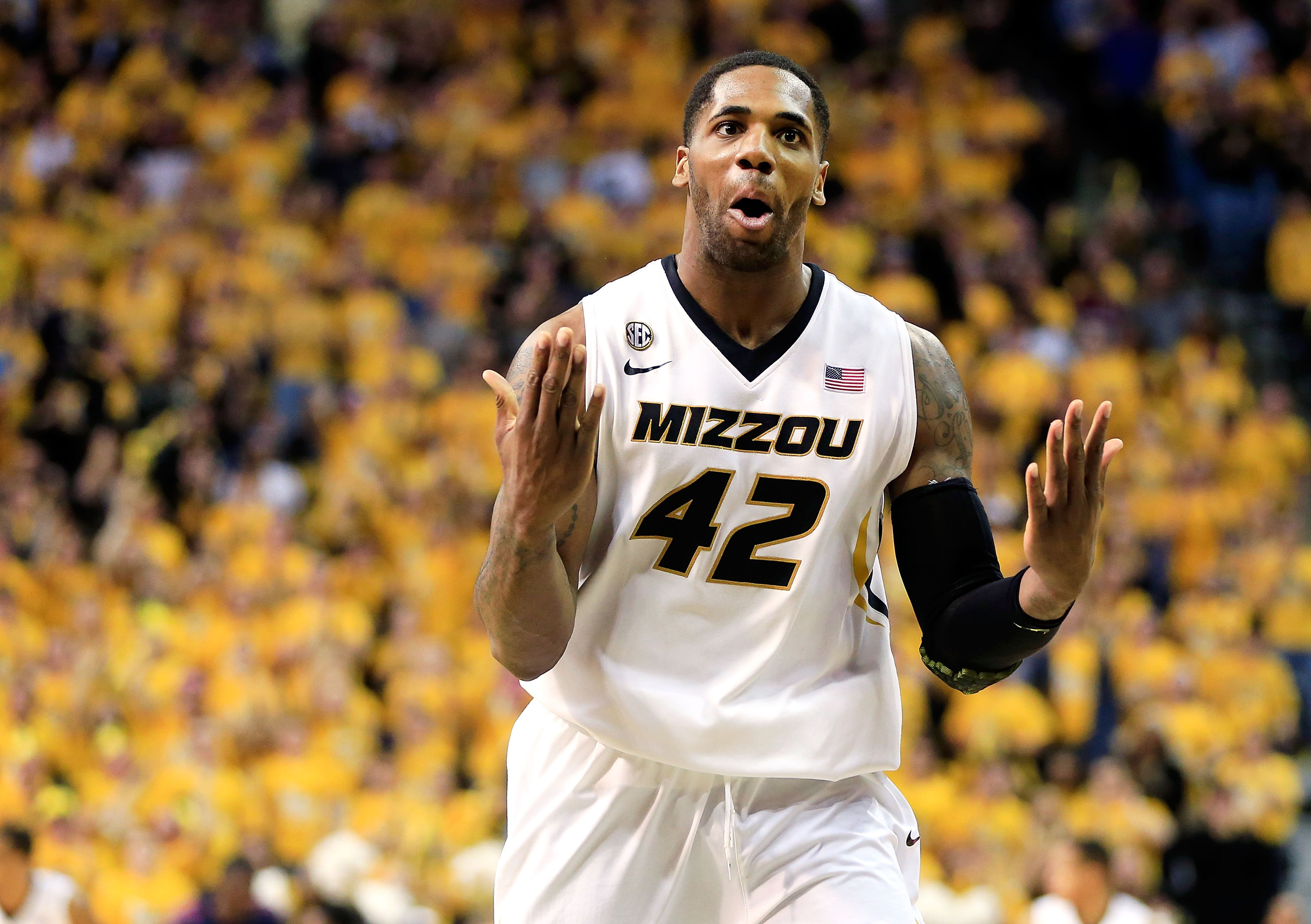 When Alex Oriakhi officially announced that he was transferring from UConn to Missouri for his senior season, UConn fans warned us: We would love him, and he would drive us crazy. His year in Columbia has played out just like that. He is emotional, and it sometimes gets the best of him. He bickers at officials because he isn't getting calls, which basically results in him continuing to not get calls. When things get tough, he sometimes gets morose. But he is also the best sparkplug on the team, he is precisely the type of player Missouri needed last year, and he is playing some of the best basketball of his career as it comes to an end: 16 points and 15 rebounds against Kentucky. Eighteen points on 6-for-6 shooting versus South Carolina. Eighteen points (on 9-for-11 shooting) and 10 rebounds against LSU. Ten (on 3-for-3 shooting) and eight versus Arkansas. Thirteen and 10 versus Texas A&M. Sixteen and nine versus Ole Miss. A field goal percentage of 93 percent (13-for-14) in the SEC Tournament. His offensive efficiency has skyrocketed in Columbia as compared to Storrs. His rebounding has been as good as ever. A 59 percent career free throw shooter, he has even raised his rate to 74 percent this year.

And then there's the Party Starter. 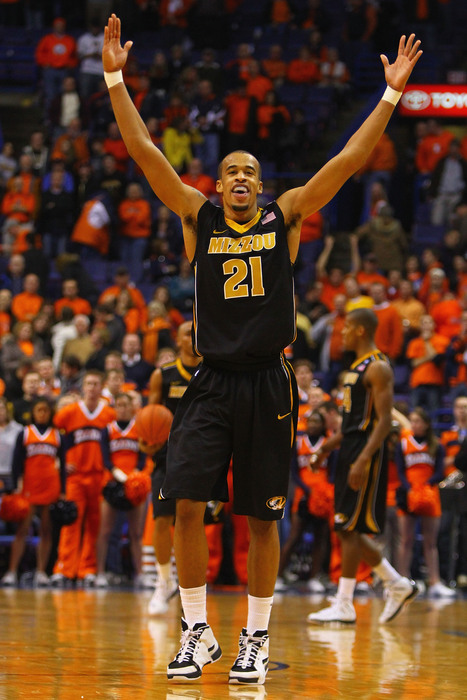 It feels like Laurence Bowers has been here since the beginning of Rock M Nation. He hasn't, but he kind of has. He committed to Mike Anderson on September 12, 2007, a few weeks before Rock M was born of two blogger parents. When he reported to campus, Rock M was averaging about 700 hits per day and maybe a small handful of Links comments each morning. When we had enough to members to go on a meme spree, he became one of the first test subjects. He has started parties and crashed them. He has wished us a Merry Christmas. When he tore up his knee in the Fall of 2011, we were devastated. When he returned, we were proud parents. His presence has defined the Rock M Nation era, as a role player during the 2009 Elite Eight run, as a main contributor on a disappointing 2011 squad, as a leader who sat in front of the press and spoke while his coach snuck out the back door, as the head cheerleader for Mizzou's 30-win squad, and now as the old sage and leading scorer for a rebuilt team of newbies and transfers. He showed up to read to area kids almost immediately after finding out he had torn his ACL. I'm not sure there has ever been a better representative of the Missouri Athletic Department than the product of Nancy Bowers, Laurence Young, and the city of Memphis.

I am optimistic about tonight, but you never know. This team could make another deep March run, or tonight might be the last time Bowers, Oriakhi, and Bell will suit up as Missouri Tigers. Whenever it ends, it will be too soon. So to the guy who's been around forever and the two who haven't been around long enough, I'll just say that it's been a pleasure.

But all that said, why don't we keep this train rolling for another few games? 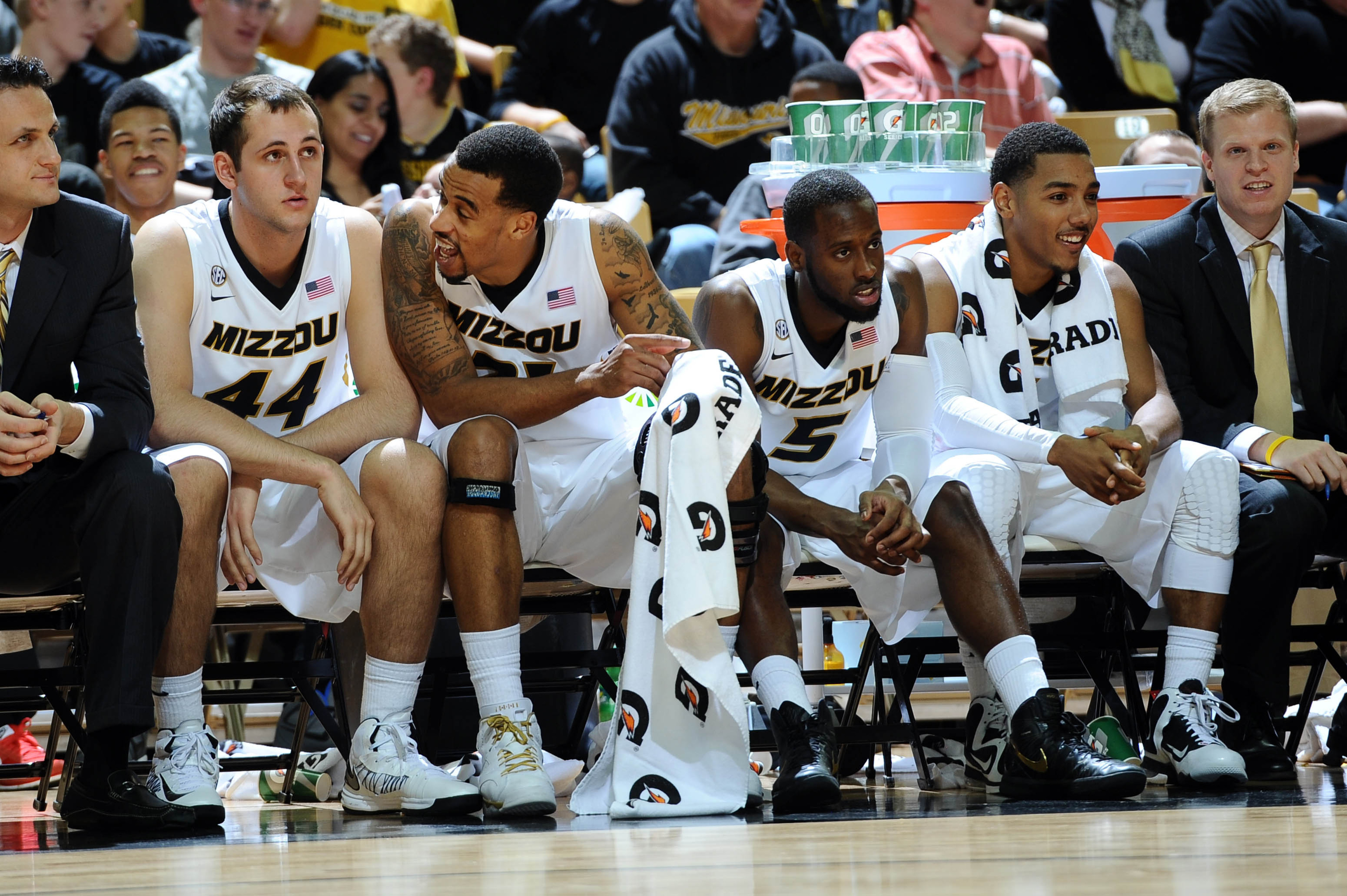 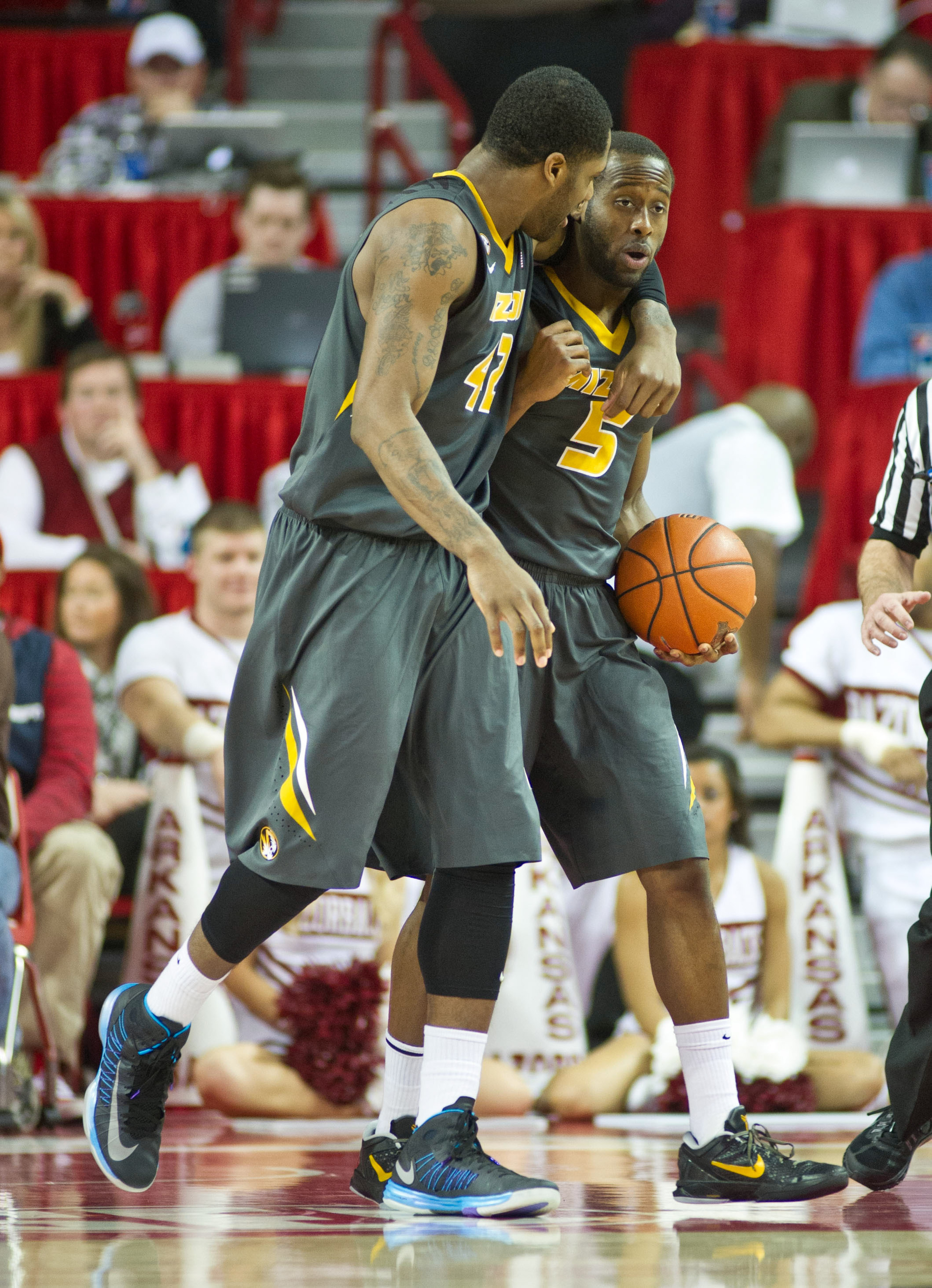 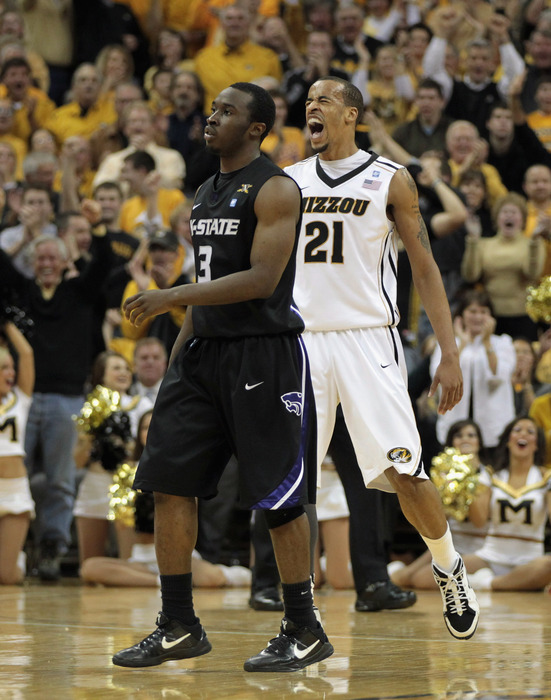 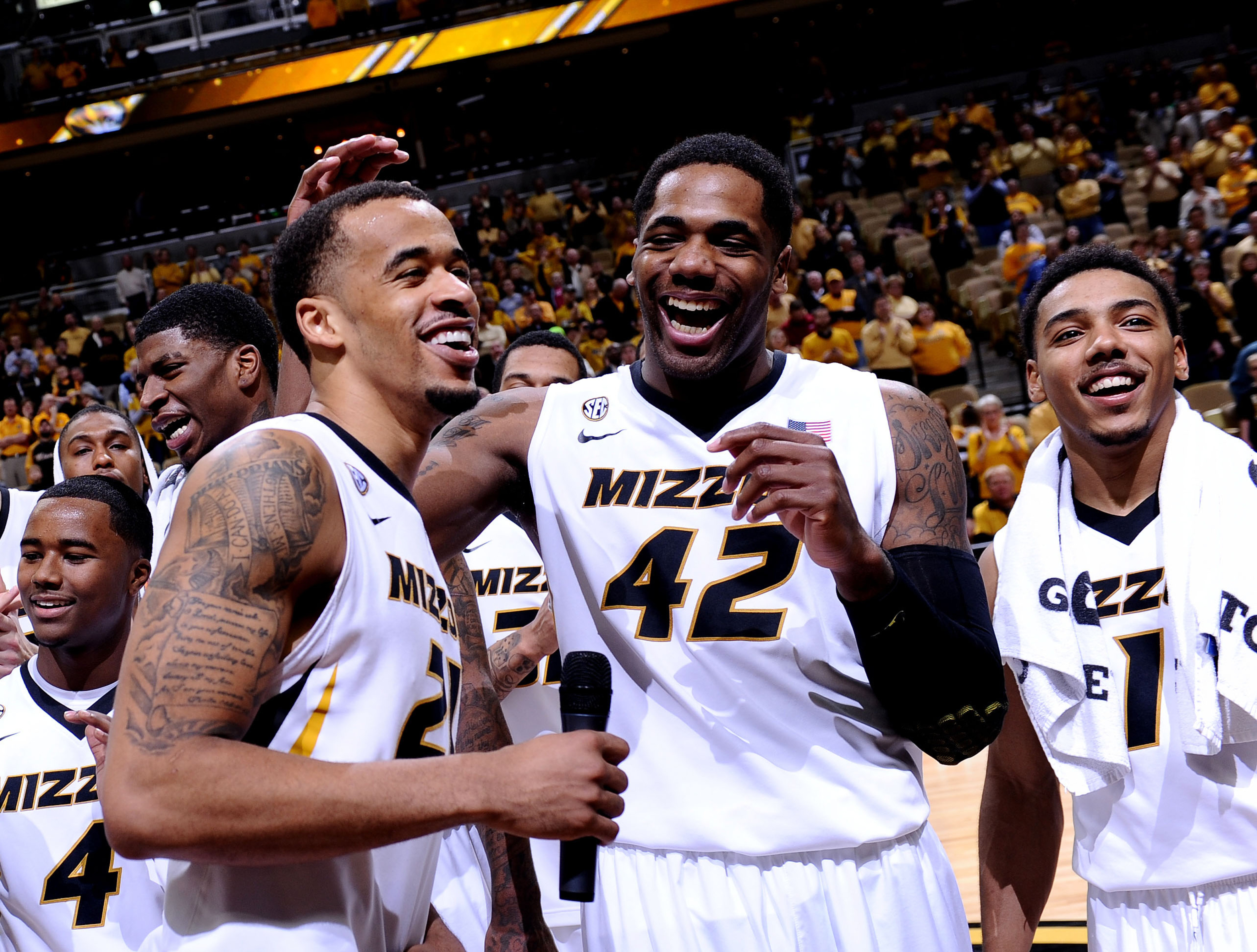