The State of Mizzou Basketball: The Frontcourt

And now things get weird. I cannot immediately recall a set of Missouri bigs with such a widespread, diverse skill set and well-defined set of liabilities.

Share All sharing options for: The State of Mizzou Basketball: The Frontcourt

If you are in the mood to be optimistic, you don't have to try hard to think about the impact of Stefan Jankovic's enormous offensive upside, or Tony Criswell's general lack of a true flaw, or Ryan Rosburg's steadiness and maturity, or the potential impact of Keanau Post's alleged defense, or the overall upside of Johnathan Williams III.

And if you're in the mood to be pessimistic, just point to Criswell's general lack of a true strength, or Rosburg's invisibility on offense, or Jankovic's defensive downside, or Post's potential offensive flaws, or the fact that freshmen Williams and Torren Jones aren't that much more highly-touted than Rosburg and Jankovic, neither of whom made an enormous impact in their freshman seasons. This unit has some awe-inspiring upside and stunning downside. And its competence will likely determine whether Missouri is an NCAA Tournament team in 2013-14.

Tony Criswell is a solid rebounder; he was the nation's Top 500 in both offensive and defensive rebounding rate.

And that's the end of the list of Criswell's true strengths.

And that's the end of the list of Criswell's true weaknesses.

Tony Criswell was perfectly decent as the backup big this season. His offensive effectiveness was damaged by a broken hand suffered in late-December, and it clearly effected him through the rest of the season. On multiple occasions, he could be seen holding or massaging his hand on the court. That limited his willingness to take jumpers (which was partially good, partially bad) and made him a bit more of a low-usage player, but as his time at UAB (2010-11) can attest, that generally suits him well. He asserted himself offensively in November and December, and the results were mixed.

If Phil Pressey returns in 2013-14, Criswell will likely get the first crack at the "Flip's Pick-and-Roll Muse" role that Ricardo Ratliffe mastered in 2011-12. And he might actually be decent in that role; he's acceptable around the rim. But he'll also need to continue rebounding well, and he'll probably need to be able to knock down a few jumpers as well. He'll be part-Laurence Bowers, part-Alex Oriakhi for this team, hopefully the steady guy amid a sea of high-upside, low-downside options. How much he will be asked to produce will depend on guys like Jankovic and Williams, but his success in whatever role he plays will be as much of a determining factor of Mizzou's overall success as anything else.

In just 197 total minutes on the court, not even five full, 40-minute games, Stefan Jankovic produced a highlight package, and a series of amazing photos, better than anybody else's on the team. There are only 23 photos of Jankovic in our USA TODAY Sports/Getty Images photo tool; six of them are amazing. That's a really good percentage. 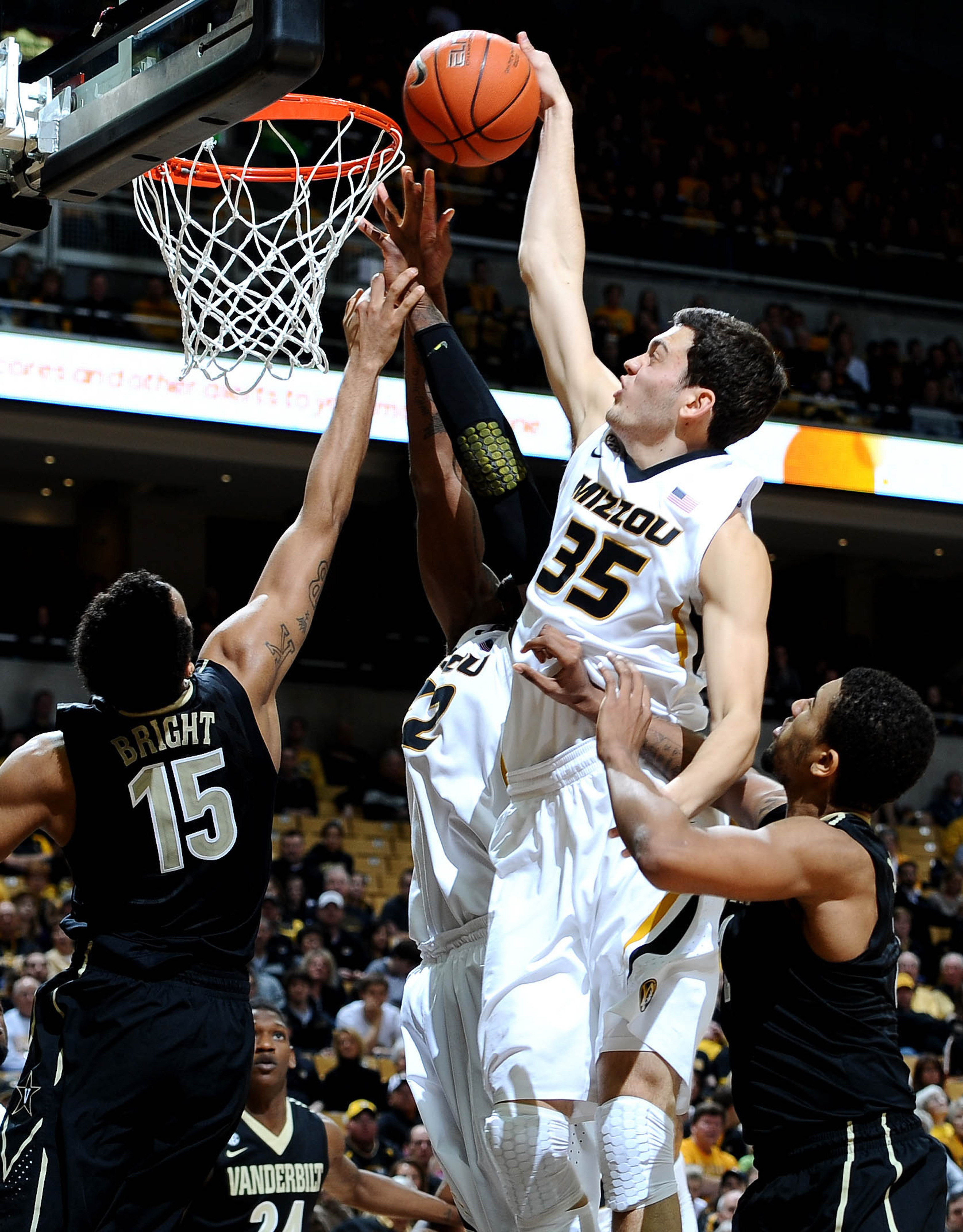 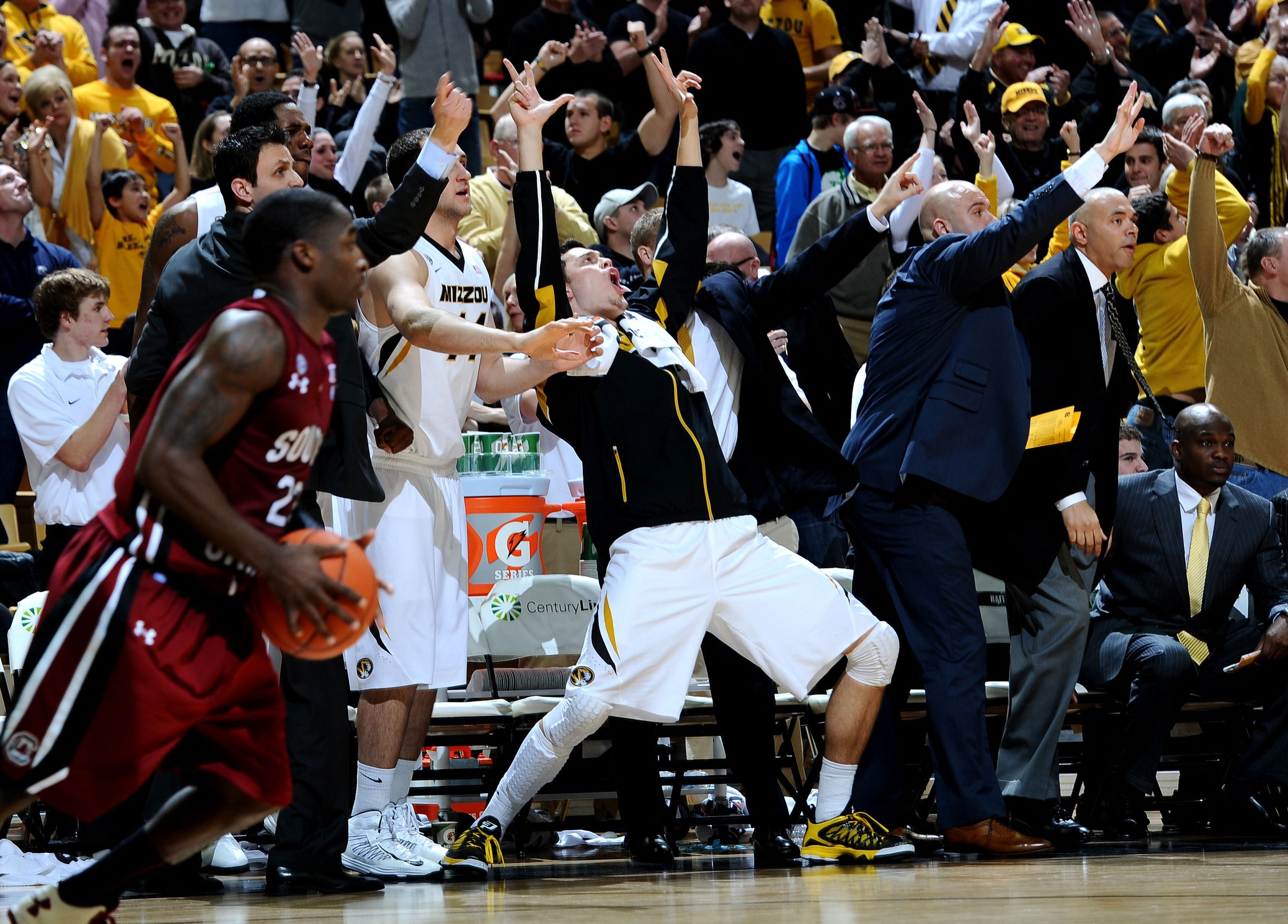 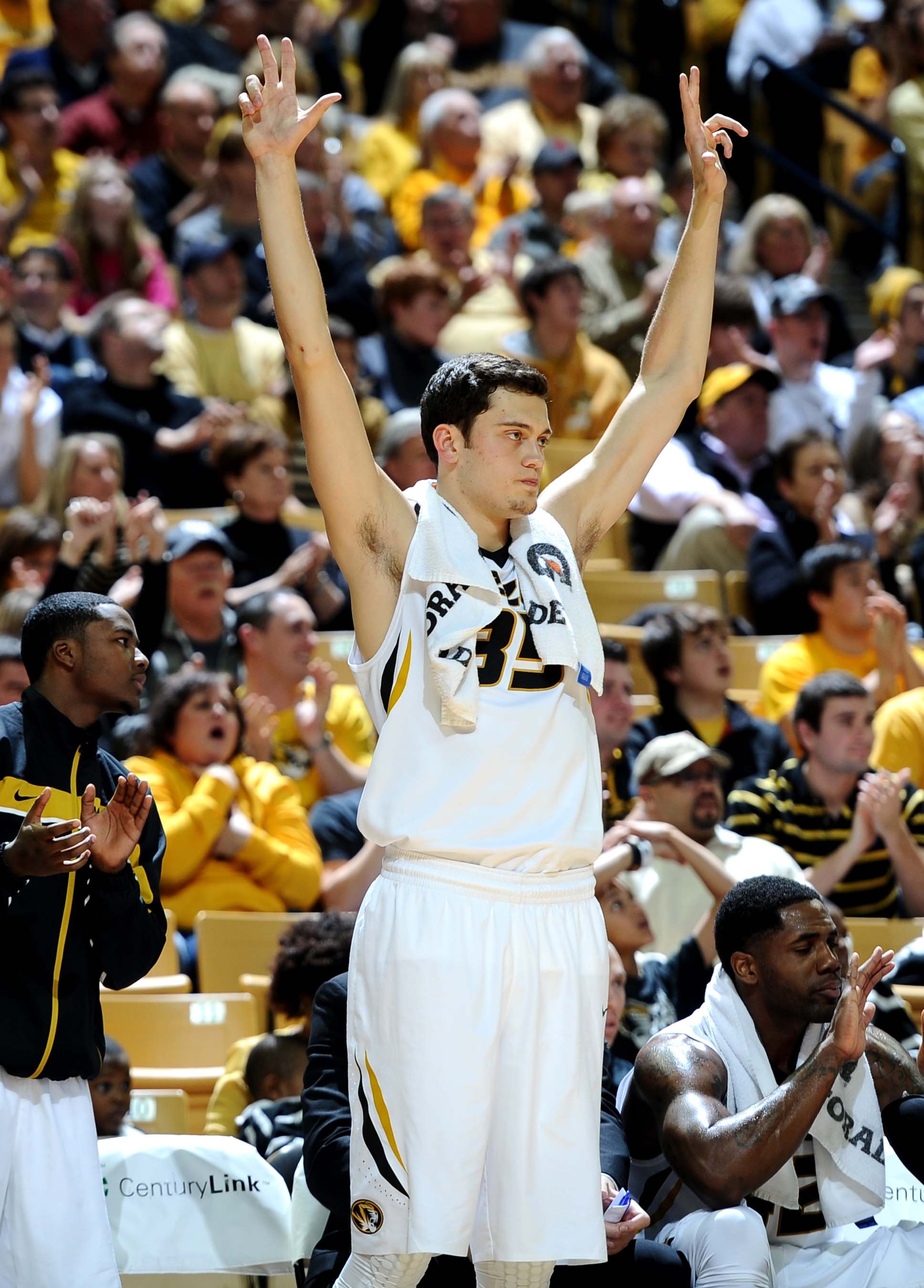 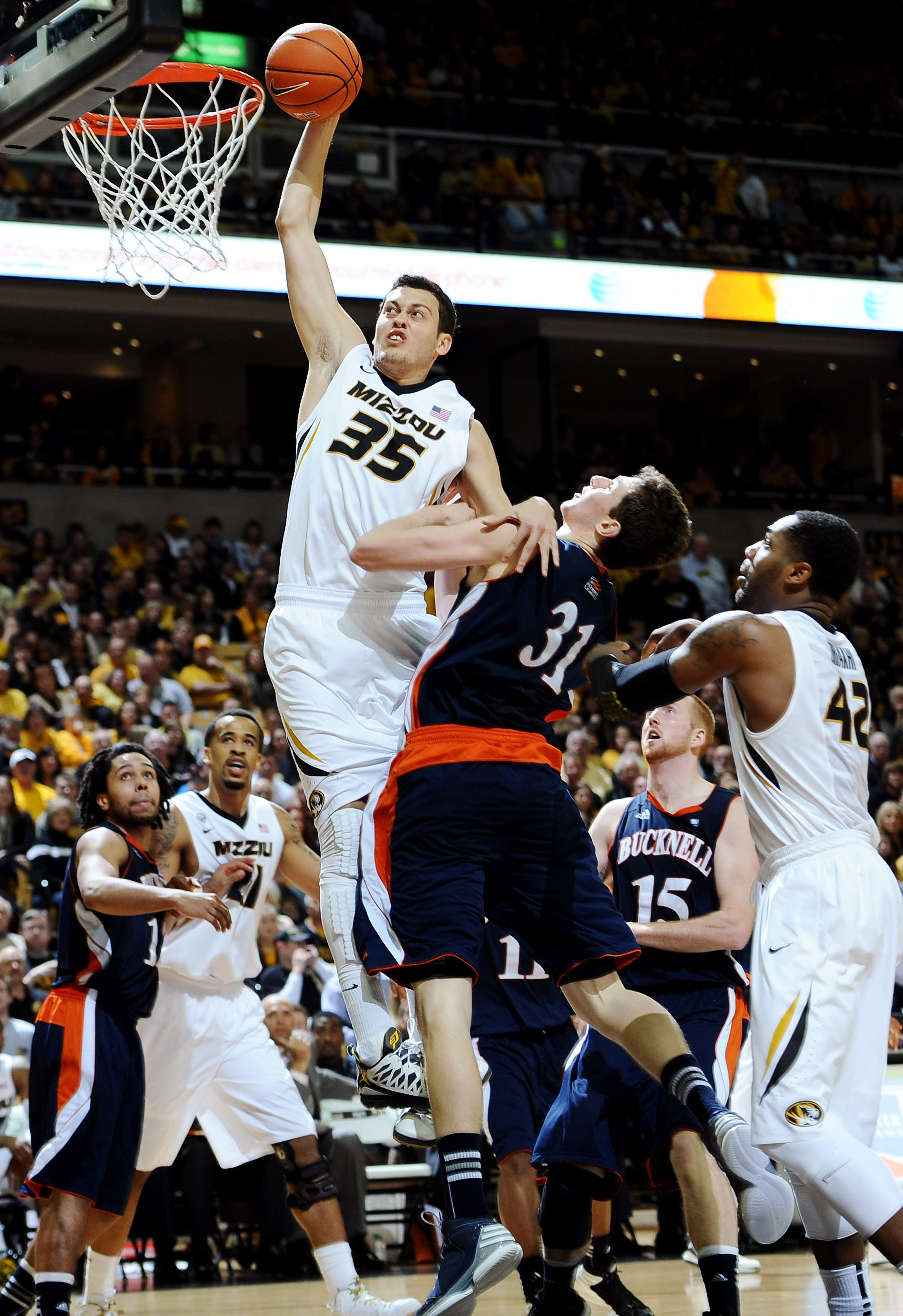 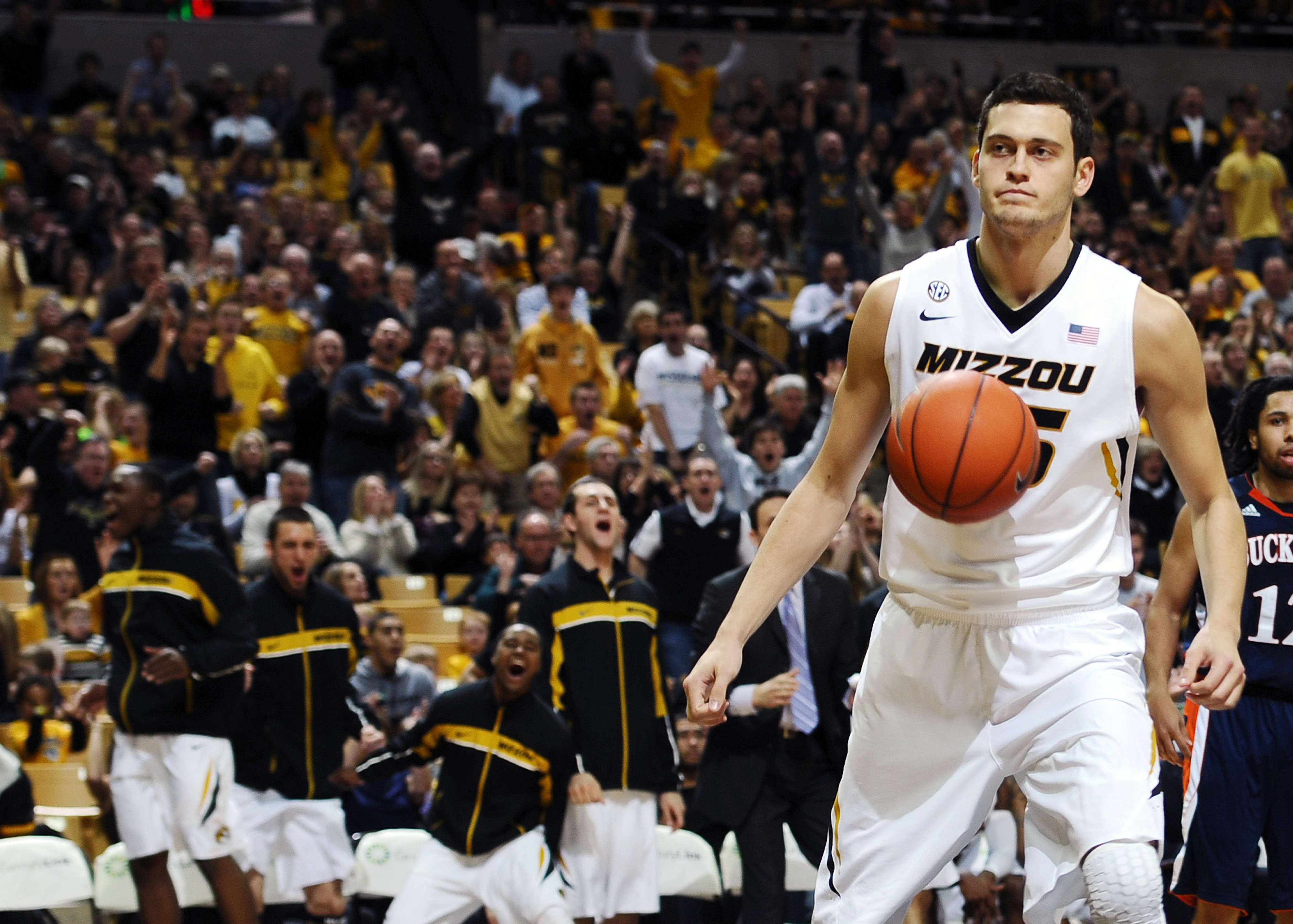 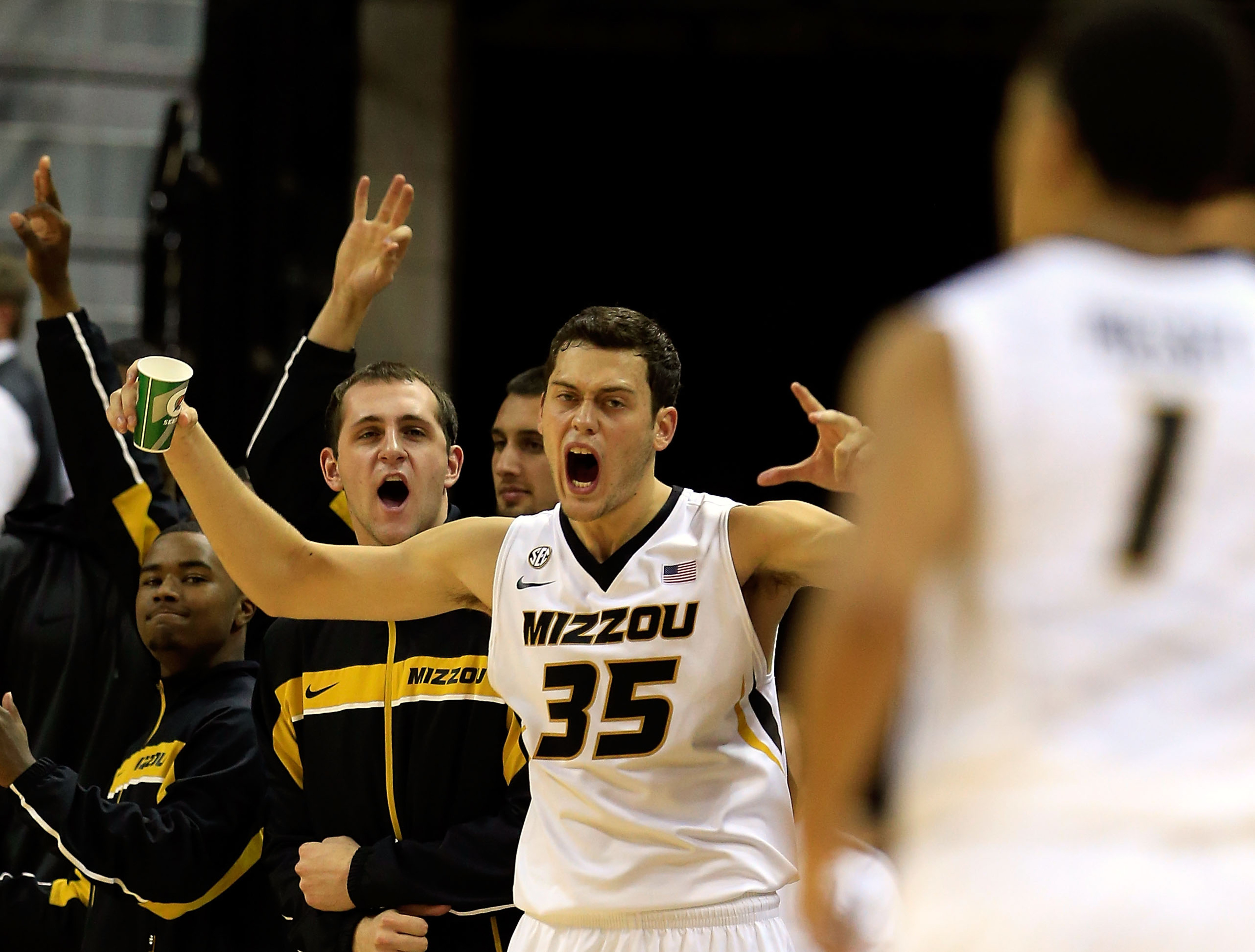 Stefan Jankovic forces you to dream big. At his best, he could be a scorer from the wing (his stats suggest "small forward" more than anything else) and an extra-long presence and solid team defense contributor. At his worst, he could continue to get lost on defense too much to see the court. He was decent at recovering -- he perfected the "hard foul to prevent an easy bucket" move -- but this season he was basically the polar opposite to Ryan Rosburg in every way: all strengths or weaknesses, no in between, and visible at all times.

(Here's to hoping he gets that acid reflux under control, by the way. That was a contributing factor to his non-minutes as much as his defense.)

By the end of the season, Frank Haith had narrowed his bench down to Earnest Ross, Tony Criswell and Ryan Rosburg. Rosburg never played big minutes in spelling Alex Oriakhi, but he was a constant presence in the rotation. (At least, he was until the NCAA Tournament, when he didn't play at all.) He was basically a space filler, unnoticeable because he wasn't doing anything good or bad. Your ability to avoid mistakes earns you playing time as a freshman, but one has to wonder about Rosburg's upside moving forward.

Rosburg proved to be a solid force on the offensive glass and a bit of a non-factor on the defensive end. That absolutely, positively must change in 2013-14. Mizzou is losing Oriakhi, one of the nation's better defensive rebounders, and Rosburg's DR% was lower than Earnest Ross' and Keion Bell's and almost lower than Jabari Brown's. That's not going to cut it. In theory, Mizzou will get a good portion of its offense from the backcourt next year, but if Rosburg is going to play, he's going to have to deliver on the defensive end, or else he's going to lose most of his minutes to a newcomer.

A walk-on, Feldmann didn't exactly have much of a presence in the rotation and probably won't this coming season, either. Still, there are worse luxuries in the world than a walk-on with size.

First of all, his back story his fantastic.

He had grown up on the Caribbean beaches of Negril and Grenada, the son of a Jamaican father and Canadian mother. As a little boy, he was as active as you could imagine, swimming and running and playing soccer all day long. But by the time his mother took her three children back to Canada, Keanau seemed to lose interest in sports. By the time he was 12 and taller than most of the kids his age, Keanau’s older brother, Mukiya, tried to get him to play basketball when they moved briefly to Grenada, but Keanau just wasn’t terribly interested.

Actually, it wasn’t that he never got it. It was just that he was too preoccupied with "those darned video games."

Jazmynn Post started to notice that Keanau was no longer close to his brother Mukiya. They were only 11 months apart, and once practically inseparable. But once they moved to Victoria, British Columbia, Mukiya got into sports, while according to their mom, Keanau "started to hang around with lazy kids who only wanted to play video games. I knew I had to do something to get him active again," said his mom. "So I used to make him walk the dog, and when he was finished with that, I’d tell him, ‘You have to go to the basketball court and meet your brother.’" […]

But something happened over the course of the next few months. The reluctant athlete became the obsessed one. He started playing every day and started to figure things out. And as he kept growing, to 6-8 by the 10th grade and nearly 6-10 by the time he was a high school senior – and as he and his brother began to watch the NBA, young Keanau started to dream some mighty big dreams.

It's not embeddable, but go Vimeo and watch Post's video highlights from PowerMizzou. It isn't a highlight reel -- it's footage involving him in a game in which he scored eight points and grabbed eight rebounds. Here's my amateur evaluation: He is super-active and bouncy (I don't use that word enough), always moving around. He was far more physically strong than his opponents in this game, too. He is also pretty uncoordinated. If he can get his hands on the ball (and keep them there), he seems like a pretty good, intuitive decision-maker, but he doesn't seem like much of a threat to score from beyond about five feet from the basket.

He's a really raw Alex Oriakhi, in other words. I think Post could be a lovely presence on the defensive end, and he appears to have a bit of a magnetic attraction to the ball on rebounds. This is good. And as long as the other four positions on the court are doing the work on the offensive end, he could be a lovely weapon next year, sort of a more athletic, less coordinated Steve Moore. He got a four-star designation from Rivals.com, mostly based on potential, but I wouldn't expect more than about 8 & 6 out of him next season. That could be perfectly fine, again, as long as the other positions are producing on offense and he is able to stay out of foul trouble for long enough to have a defensive impact. We'll see.

If Criswell is Flip Pressey's primary muse on the inside, Johnathan Williams III could be the backup.

About 90 percent of the highlights in the two videos above are of Williams playing around the rim. In the first video, he proves to be a hell of a finisher off of drives-and-dishes. Honestly, that's good. We might find out that, despite his status as a Top 50 recruit, Williams' game is not fully ready for college ball. It happens more frequently than it doesn't. But if he can serve as a finisher around the rim and as a shot-blocking presence (which Mizzou will certainly need), then he can pretty quickly carve out some minutes.

If either Williams or Jankovic can produce a reliable amount of fire on offense and competence on defense to complement the offense of Criswell and the defense of Post, Mizzou is in really good shape for next season. But those ifs are not guarantees.

All we really know about Torren Jones is that a) despite being of similar size to Johnathan Williams III, he looks a little bit bigger and more stout, and b) he can finish around the rim. His YouTube presence is basically limited to this:

It is absolutely impossible to figure out if players like this will be able to contribute quickly at the college level, but it's nice to have two candidates here -- Williams and Jones -- to go alongside the interesting-but-limited players mentioned above.