Your Trifecta: Bowers-Brown-Ross. Your winner: nobody!

I've never bought in, 100 percent, to the "Defense is all about effort" narrative. Sure, effort matters, but so do execution and general basketball smarts, right? Well ... last night showed that effort is a good percentage of the equation. A team that hadn't played defense since the Florida game, allowed 22 points on 31% shooting with four turnovers, almost no second-chance opportunities and multiple desperation 3-pointers in a frenzied first half. Arkansas got the game it wanted -- up-and-down chaos for spells, lots of turnovers for Missouri -- and couldn't put the ball in the basket to save its life. That was tremendous. Of course, it also showed what this team is capable of. If Tennessee averages 1.15 points per possession this coming weekend, it will now be doubly annoying. But wow, what an effort. Sure, things loosened up in the second half. That tends to happen when you're up 26 after 20 minutes.

During his mid-timeout ESPN interview in the first half, Mike Anderson said his team was settling for 3-pointers and not getting the ball inside. And he was right. But his team also had almost nowhere to go with the ball inside. Last night we really did see in practice the defense we could see in theory: long arms impacting every pass and grabbing every rebound, muscle on the perimeter, et cetera.

We also saw this. And it was fantastic. 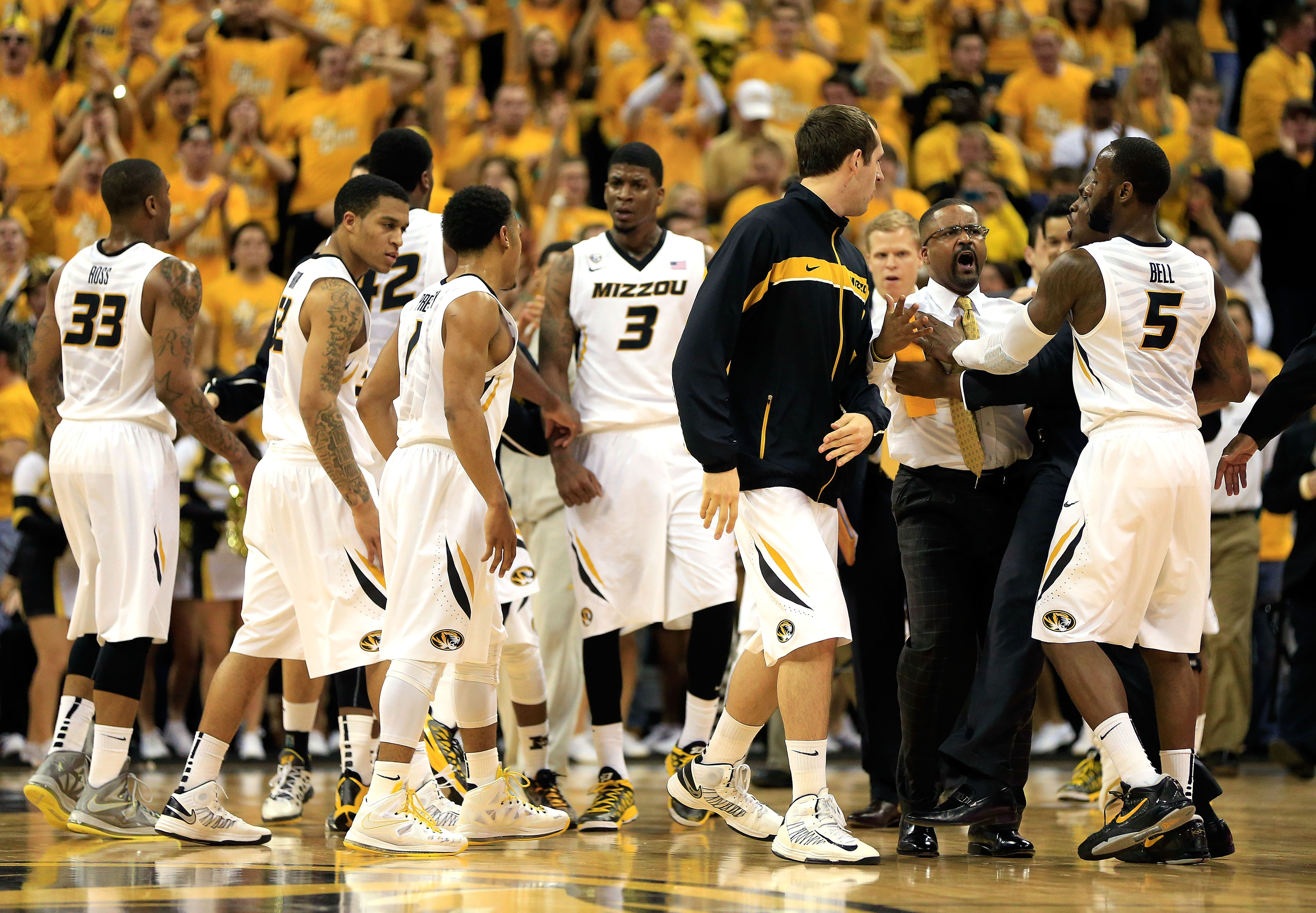 Apparently Frank Haith and Mike Anderson made nice after the game, but ... you get the impression that Haith was looking for a fight heading into this one. I don't think many Mizzou fans minded.

Always. This is a game involving a Mike Anderson team.

Yeah, I'd say that worked out in Missouri's favor. Mizzou had a pretty clear mission: When you beat the pressure, go to the rim. And while the Tigers were committing turnovers like crazy there for a while (seven in the first seven minutes), they were also inducing all sorts of reach-in fouls while attacking the rim. And when they didn't get fouled, they probably got an offensive rebound. Oh yeah, and they were making five of nine 3-pointers to boot. It's hard to commit 10 first-half turnovers and lead by 26 at halftime, but that's the blueprint.

Mizzou Arena is funny. When it is 100% into a game, which only happens once or twice a year, it has the power to cow both the visiting team and the home team. It seemed frequent in those old Kansas games that, when the stakes were high (primarily 2009 and 2012), both teams played a bit freaked out at first; and it happened again to an extent against Florida a couple of weeks ago. But that building can also carry the home team down the stretch. It is an amazing arena to behold in the final minutes of a rivalry game. And with the Anderson Effect, combined with Senior Night, I expect it at its best tonight. If Arkansas can overcome potential runs, keep the game close at the end, and then win in that environment, power to the Hogs.

Arkansas went on a quick 10-2 run to start the second half, but this was a fifth-round knockout. And the arena played its part

I could have gone with Phil Pressey here, and I could have gone with BCI! BCI! (this is a Mike Anderson game after all). Instead, though, I'm going with this. Over his last three games, Alex Oriakhi has averaged 17.3 points per game (on 72% shooting from the field) and 9.3 rebounds (4.3 on offense). And on Saturday, Laurence Bowers officially looked like Laurence Bowers again, scoring 23 points and grabbing 10 boards. The battle between Bowers-Oriakhi and Clarke-Powell will likely decide the game. Lord knows Flipadelphia will play a role, as will plenty of other factors (ball-handling, rebounding, etc.). But this battle is absolutely enormous.

Coty Clarke and Marshawn Powell made up a little bit of ground with blocks and steals, but this battle was no contest.

(Clarke, by the way, could play on my team any day. I really like watching that guy. Tremendous role player, perfect for Anderson's system. But I digress.)

What a night, huh?

Missouri is 11-6 in SEC play, with a chance at second place