When you look at James Franklin's decent-not-great spring game stats -- 9-for-15 for 80 yards -- realize this: If receivers had held up their end of the bargain, he'd have been 12-for-15 for about 115 yards. Marcus Lucas dropped a well-thrown ball 10-15 yards downfield early in the scrimmage. Then, on a well-setup screen, Bud Sasser got starry eyes about a big gain and dropped the pass. And on a third down, Franklin was slightly off-target to Dorial Green-Beckham, but DGB alligator-armed it a bit and still should have caught the pass. A 60 percent completion rate at 5.3 yards per pass is far from amazing. But 80 percent at 7.7 yards per pass? That at least begins to look like Franklin isn't backing into the starting job.

Franklin looked fine on Saturday. He short-armed a long out, and as Josh Henson pointed out in the links below, he made a couple of iffy reads early on. But he was fine. If that version of James Franklin leads Mizzou into battle this fall, the offense may not be '2008' good, but it'll be fine. And that's good to remember because the two young QBs, sophomore Corbin Berkstresser and redshirt freshman Maty Mauk, struggled mightily. 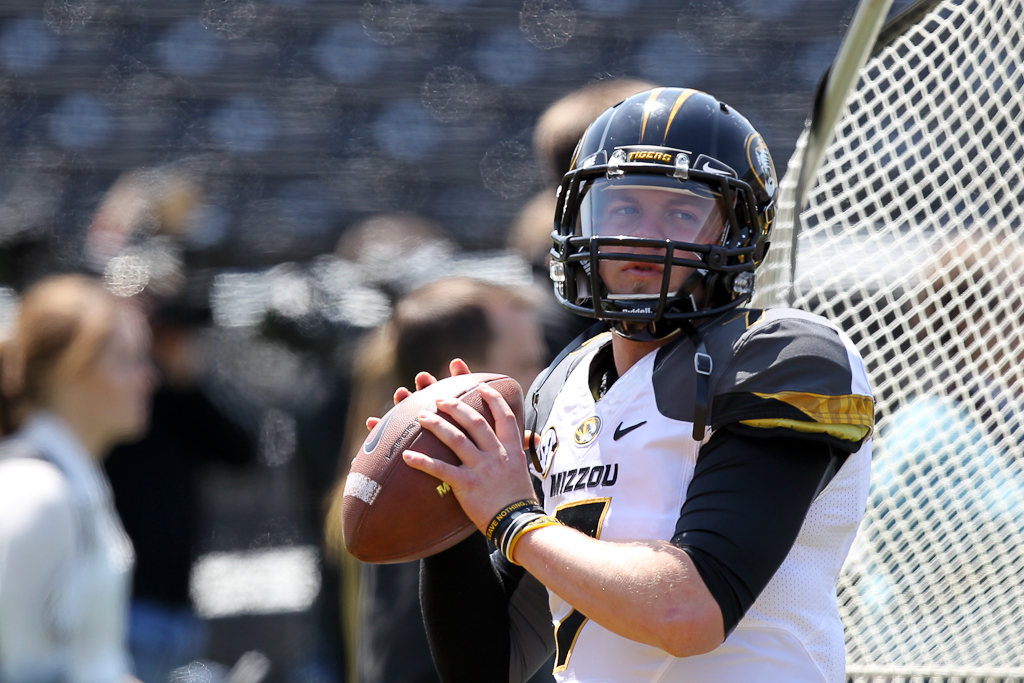 Now, if I'm giving a disclaimer for Franklin, I need to do the same for Mauk. As I mentioned yesterday, the one-hand touch rule on QBs put him at a disadvantage. He is a "read one or two receivers, then spin out of the pocket to buy time" guy. As he matures, he will probably learn to stay in the pocket longer, but this style can work alright, especially if you are pretty fast (and Mauk is). But the one-hand touch rule both led to a couple of sacks (that wouldn't have otherwise happened) and forced him to throw a little more quickly on the run than he otherwise might have. And a lot of his 11 incompletions were throwaways; he wasn't as inaccurate as his stats made it seem.

But he wasn't good. He improved in the second half, as he relaxed (and escaped the first-string defensive line). It would be foolish to compare him to Johnny Manziel, obviously, and I'm not going to (at least, not really), but he is that style of quarterback. He should become a pretty good out-of-the-pocket improviser, especially since he presents a pretty good run threat. But he's still quite obviously a work in progress. Hey, so was Manziel this time last year.

One other note on Mauk: wow, does he have the tendency to go to the sidearm. As The Beef put it on Saturday, "His ball comes out short." That is a major tendency when he's on the run, and maybe he throws taller from the pocket, but he'll need nice throwing lanes. 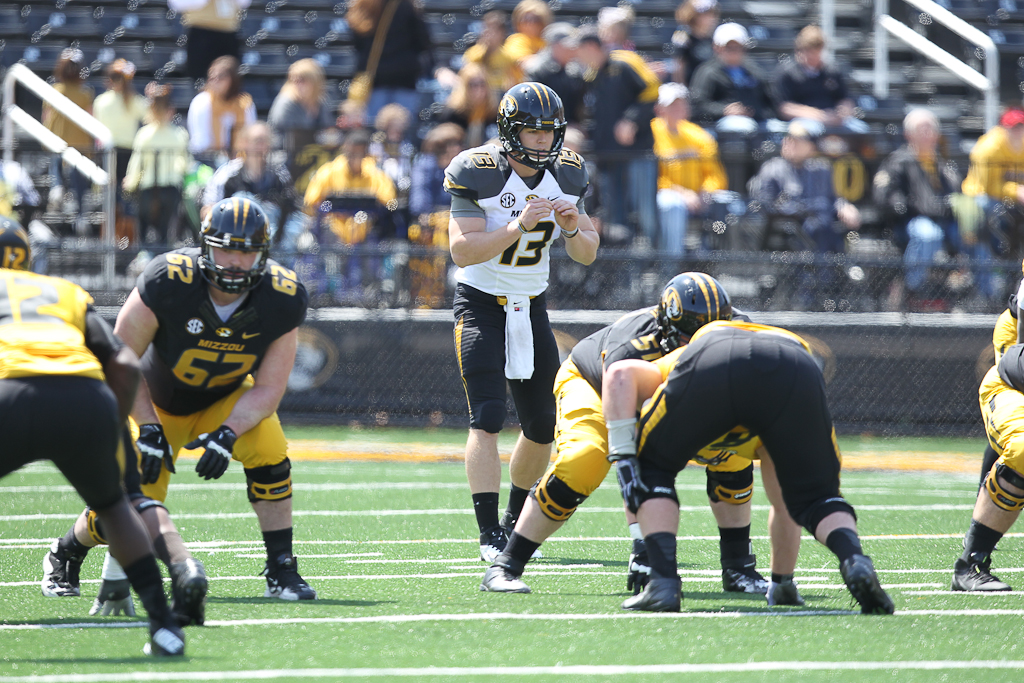 Then there's Berkstresser. I feel bad for Corbin at this point; when he confidently steps into downfield passes, he shows off the arm we were told he has. Nobody on this team throws a better 20-yard pass than Berk. But he struggles at times with both finesse and mistakes. His decision making still needs to speed up a bit, and nobody on this team throws a worse 7-yard pass.

One would think his issues are fixable, but one would also think that his mistakes make him an easy No. 3 in this QB race, even though he was quite possibly better than Mauk on Saturday. Upside is important, and Berk has plenty, but he probably still has a little bit more downside than Mauk and Franklin at this point. 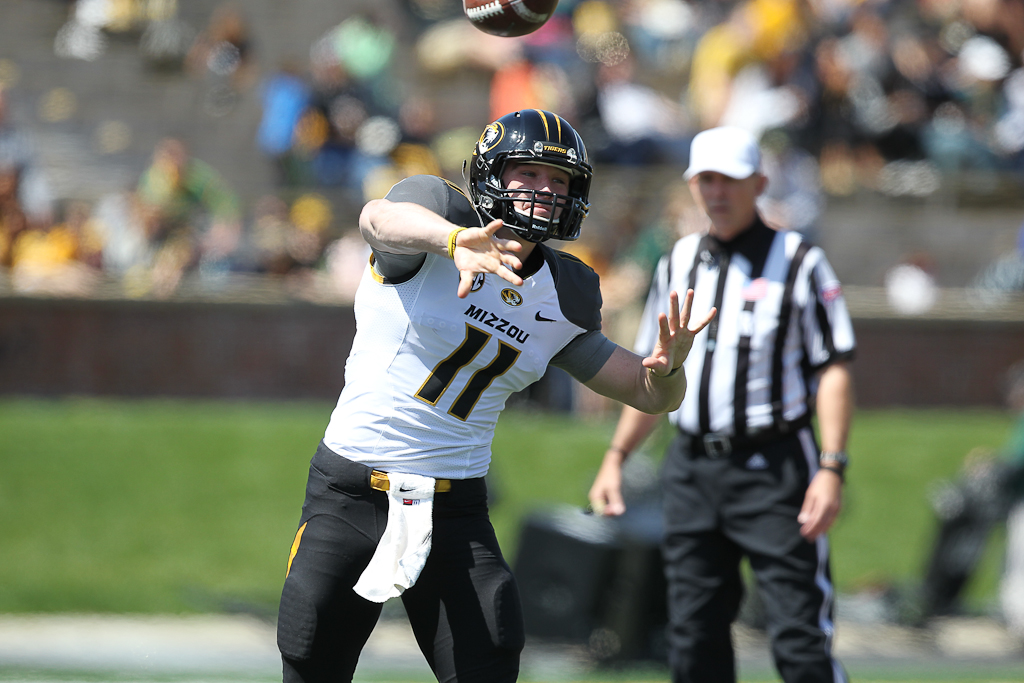 Of course, these weren't the only three quarterbacks on display on Saturday. We got a look into the future, watching two true-freshman early enrollees, Trent Hosick and Eddie Printz, Jr., late in the scrimmage.

Hosick impressed me a decent amount. He has a max-effort throwing motion -- when he throws hard, it looks like he's throwing hard -- but he made good decisions and moved the ball well in the "third string versus third string" portion of the scrimmage. (By the way, this game moved quickly. We'd have probably gotten more out of going to last weekend's scrimmage instead of this one, but the weather stunk.) He is big and athletic, as advertised, and one could easily see him becoming a strong game manager. His throwing motion isn't amazing, but it is more than good enough, and while it is certainly conceivable that he could end up at another position one day, don't assume it just yet. He can throw. 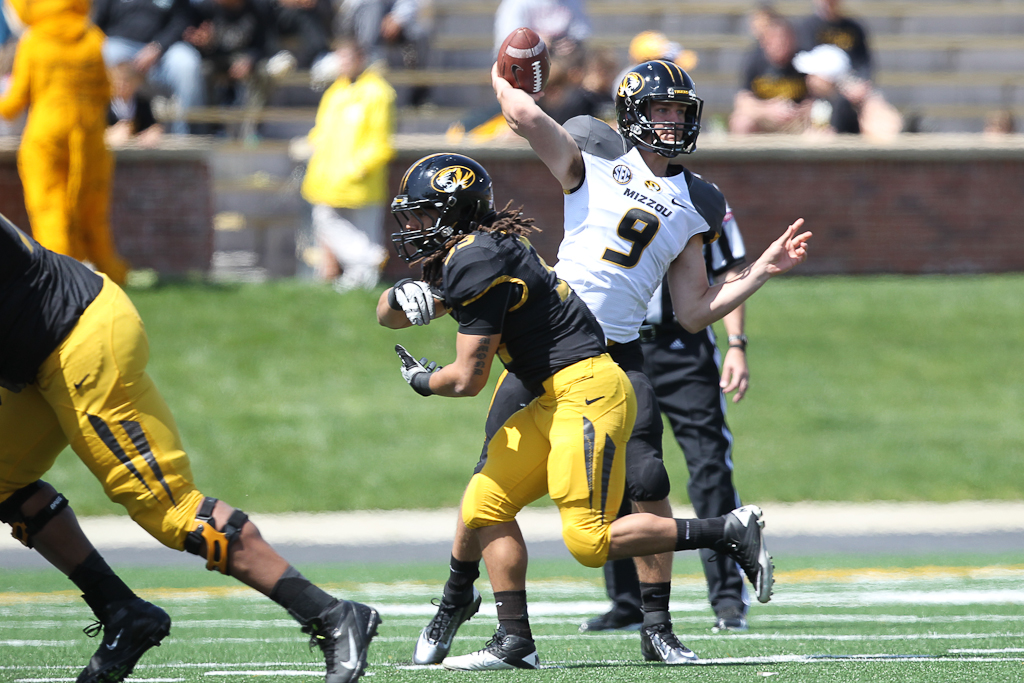 Eddie Printz, meanwhile, has the smoothest throwing motion on the team. One can tell that, while Hosick was maybe an athlete put at quarterback, Printz was raised a quarterback. He is certainly athletic enough, but he's meant for throwing the ball. He didn't get too many opportunities to impress on Saturday, but we saw what we needed of his throwing motion in warmups. On way play in the scrimmage, he escaped the pocket and, rolling left, attempted a difficult dump off to a running back (Tyler Hunt, I think) to his right. He couldn't quite finess it in, but it was really difficult.

You cannot glean much when a quarterback plays 1-2 series with mostly walk-ons, but you can certainly see potential in both of them. Hopefully they'll both get in some nice work on the scout team this fall (if they have to play, something went seriously wrong), and we'll see where they are this time next spring.

The Trib: Franklin keeps mistakes to a minimum in Black and Gold Game

The biggest story of the spring will simmer into the summer and perhaps a few weeks into preseason camp. And that's fine with Missouri's coaches.

"I don't think it's a bad thing that it's not settled yet," said first-year offensive coordinator Josh Henson, who called plays from the east-side bleachers while the press box is under renovation. "There's going to be a lot of positions on the team that's not settled yet, so I don't know why the quarterback position is any different from some of those others. You're tying to get better and see who gives you the best opportunity to win games."

Franklin fit that description better than the other candidates yesterday, but his brief appearance was far from perfect. He led four possessions against the No. 2 defense, twice settling for punts. Marcus Murphy and Henry Josey punched in short touchdown runs on the other two drives. Franklin rarely pushed the ball downfield and completed 9 of 15 passes for 80 yards.

In the spring's three scrimmages, he was the most accurate of the three contenders, completing 60.7 percent of his passes, compared to 47.5 for Mauk and 44.8 for Berkstresser.

If Mauk beats out Franklin and Berkstresser, then the Tigers are better than last year at quarterback, and the quickest solution to the problem of losing is to get better at quarterback. Mauk, a redshirt freshman, is the youngest of the three — an advantage if a competition is too close to call — and he still has that new quarterback smell that proves so intoxicating.

Through the first two scrimmages, Mauk did what he needed to do — play Franklin to a standoff — but in yesterday's Black and Gold Game, he took a step backward. In his first public appearance, in front of an announced crowd of 18,834 at Memorial Stadium, Mauk completed just 6 of 17 passes for 72 yards. In the first half, he did what you can't do: throw two interceptions. And he could easily have been picked off a third time when he threw one up for grabs deep in his own territory in the waning seconds.

"I didn’t think we were very sharp today," said new offensive coordinator Josh Henson. "I think everybody in the stands could probably look at that and see it. I thought as an entire offense, we weren’t very sharp. The focus wasn’t where it should be. We’ve played and practiced a lot better than that this spring."

Missouri’s first-teamers won the scrimmage 21-14 despite the fact the second-teamers were spotted a 14-0 lead. However, turnovers were at the root of Henson’s frustration, as the quarterbacks working with the first-team offense combined to throw four interceptions in the first half.

"From that standpoint, I was disappointed," Henson said. "There’s times where we’re trying to make plays and sure, it’s third and whatever, but maybe a punt right there is better than an interception, momentumwise."

Post-Dispatch: Franklin looks on track to get starting job back

If Mizzou coach Gary Pinkel has a notion of where it’s going, he isn’t quite saying … even if he seemed to assess Franklin’s overall spring performance on a tier above those of Berkstresser and Mauk.

"James had a real good spring, probably the best one he’s had since he’s been here," Pinkel said. "Maty did some great things and Corbin certainly did, too.

"So, it will be interesting."

And, publicly, anyway, he sees no reason to make any declaration now.

"It’s fine that that’s where we’re at," Pinkel said.

Mauk did not start off well in his bid to win the job. On his first series, Mauk threw incomplete on both of his pass attempts and dropped a good snap on the other play. He also threw interceptions to Xavier Smith and John Gibson on back-to-back plays later in the first half.

"That was my first game coming back since high school," Mauk said. "Obviously it started out a lot slower than what I wanted to. Had a couple bad reads, but I finished strong. I'm excited about it and I know what I've got to work on to go into fall camp. I'm ready to go."

Throughout the first half, Mauk rotated with James Franklin, leading the first-team offense against the second-team defense. Corbin Berkstresser mostly quarterbacked the second-team offense against the starting defense. Franklin ended the day 9-for-15 for 80 yards, all in the first half. Mauk was 6-for-17 for 72 yards with two interceptions and ran twice for 27 yards. Berkstresser went 9-for-18 for a team-high 93 yards, including a pair of 30-yard completions.

James, should you have to win this job back?

"Yes, sir. Definitely," he said. "You can say there were injuries and stuff last year, but even when I did play, I didn't always perform very well. I definitely had to earn it and compete for my spot."

James, is it hard being around Mauk?

"No, sir. It's not something I really think about much," he said."I just kind of go out there and play. I coach him up when there are things he may not have seen that I saw, just give him pointers and things like that. I don't think it's really tough."

James, is it tiring to answer all these questions about the competition?

"No, sir. It's not tiring at all, " he said. "It's not too bad. It's definitely fun. It's great for all of us getting better to know that anyone can win the spot, and that I can lose my job. I think it's good for the team."

Answers like these go against the grain of the movie-image, take-no-prisoner quarterback. While Franklin is not one to shy away from contact or collision on the field, he tends to avoid it in pretty much every other way. And despite this unique demeanor, he still appears to be Missouri's best option headed into the 2013 season.