Yesterday we looked at the second-best dunk to ever take place in Kansas. Today, we relive the best, even if it technically didn't happen.

Share All sharing options for: Mizzou's Greatest, #93: Keyon Dooling and the greatest dunk that never happened

I just sat here and watched that video three more times. That brings my lifetime total up to at least 942. Let's put aside that this was obviously a hometown call. There is zero chance that was a charge unless Doug Gottlieb was the ref. Let's also set aside how it was even more obviously a defensive foul because of how that dirty fake red and blue chicken hacked Dooling on his way to the rim. Let's also put aside that Missouri lost this game by one point. Let us all just bask in the utter ridiculousness of it all.

How does a young man jump so high, so fast and with such little effort? As an overweight person who has never been able to even grab the rim even at the "peak" of my athletic ability, I am simply flabbergasted by this. Let's see it from a different angle.

The best thing of all may very well be Dooling's reaction afterwards. He is as shocked that a foul was called on him as I was that he could even do that. He seriously looks like he just walked in on his mom sleeping with "Uncle Frank." That face is priceless, and if I ever change my handle name it will be "Keyon Dooling's Shock Face".

This dunk will always go down as not only one of my favorite Mizzou - kU memories, but an all time favorite pay in Mizzou sports history. We got to see what it would look like for a Tiger to take flight. 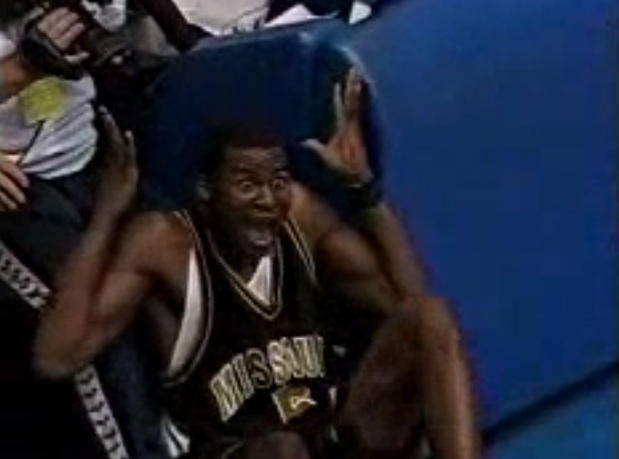