We've already discussed this one in detail. Below is a reproduction of that post, with some edits.

This reveals my age, I realize, but living in Columbia while my father finished his doctorate, my mother went into labor with me on September 9, 1978. One problem: Her doctor was in South Bend at the time. It's no wonder that I was born a football nerd--as I was trying to introduce myself to the world, Missouri was giving the defending national champions a run for their money on their home turf.

The last time Missouri had made a trip to South Bend, it was Al Onofrio's second season at the helm. Missouri had gone 1-10 in their first season and was 2-3 in 1972, coming off of a humiliating 62-0 loss to Nebraska in Lincoln. All they did was beat the highly-ranked Irish, setting in motion the trend of major road upsets the Onofrio Administration would bring.

Six seasons later, Notre Dame was the defending national champion and a preseason Top 5 team. Missouri legend Dan Devine had led the Irish to the 1977 national title, and in 1978, his offense returned starting QB Joe Montana and top RBs Vagas Ferguson and Jerome Heavens (a high school teammate of Mizzou DB Eric Wright, and soon to become ND's all-time leading rusher). The defensive line had taken a hit with DEs Russ Browner and Willie Fry moving on to the NFL, but the LB corps, led by Bob Golic, was possibly the best in the country. Devine's team was loaded, and after the 1972 debacle, he would make sure his team did not overlook Warren Powers' Tigers.

Heading into the mother of season openers, Mizzou was not lacking in confidence. Russ Calabrese suggested that Notre Dame--a 17-point favorite--was "just another team*" and Phil Bradley said they had the offensive talent to offset whatever the Irish tried to do defensively. Meanwhile, behind the scenes, Powers was telling his boys that all they would need was a field goal to win this game--they were going to shut Notre Dame out. In the grand scheme of things, Powers probably didn't really mean that, but never say this team didn't take him literally. It took 47 minutes, but Missouri finally got that field goal. Surely that wouldn't really be enough, right?

* Calabrese was a loudmouth's loudmouth. The week before the game, he also stated that he hated Notre Dame, hated the entire state of Indiana, and hated all Irish people. This came a month after a visit to Columbia by President Jimmy Carter; a few Missouri players were excited about the chance to meet the president. Calabrese, on the other hand, said he was "just a peanut farmer" to him, and that he was a Nixon man. I'd love to have seen what would have happened if Calabrese had played in the Internet age.

If ever a team stretched the "bend but don't break defense" idea as far as it could possibly go, it was Missouri on September 9, 1978. Punter (and fourth-string QB) Monte Montgomery struggled mightily in the first half, and Notre Dame continuously took the ball in good field position. By game's end, Notre Dame would put together nine decent scoring opportunities.

But time after time, the Mizzou defense made plays. Chris Garlich recovered a Montana fumble inside the Mizzou red zone in the first quarter, then intercepted a pass in the second. Notre Dame began to drive again, but this time Montana was picked off by Eric Wright (his future San Francisco teammate) deep in Mizzou territory. In a scoreless first half, Montana (or should I say, "Potentially the Greatest QB in NFL History" Joe Montana) went 4-for-17 with the aforementioned two picks.

The Mizzou defense had clearly brought its A-game, but it only seemed like a matter of time before the Irish took over. Mizzou's offense had been able to generate some first downs and move the ball in the middle of the field, but the Tigers were badly losing the field position battle. Usually a defense can only hold onto a shutout for so long.

In the third quarter, Notre Dame threatened even more. A 19-yard Montgomery punt set the Irish up near midfield, and after a reverse to Dan Stone, the Irish were at the Mizzou 20. Three plays and nine yards later, it was fourth-and-1. Even though a field goal would give them the lead in a 0-0 game, Dan Devine chose to go for it. When it came to scoring, Devine had an aggressive mindset at Mizzou, and he hadn't lost it on his way to South Bend (via Green Bay). However, the plays he chose to call remained conservative. Mizzou knew ND would go straight up the gut in those situations, and sure enough, Montana attempted a sneak. Mizzou was having none of it. The fourth down stuff gave Mizzou the ball.

With another crisis averted, Mizzou's offense took the field and immediately turned the ball over. Gerry Ellis fumbled at the Mizzou 7, and Notre Dame had a goal-to-go situation. On third down from the 4, Montana sneaked ahead and was barely kept out of the endzone. Fourth-and-inches, and Devine went for it again. And again Mizzou was ready. Vagas Ferguson took the handoff and was met at the 4 by Garlich (who would predictably go on to win Big 8 Defensive Player of the Week) and DE Kurt Peterson. Mizzou ball. Again.

Again, Mizzou couldn't move the ball, and a poor Montgomery punt set ND up at the Mizzou 36. Montana found WR Kris Gaines for a long gain to set the Irish up at the Mizzou 3. But Gaines, who had clearly read Russ Calabrese's trash talk the week before the game, couldn't resist an opportunity to rub it in and slapped Calabrese on the helmet after the play. Personal foul, Notre Dame. Ball on the 18 instead of the 3.

Backed up by 15 yards thanks to Gaines, Notre Dame gained four yards in three plays, and without hesitation this time, Devine sent on the field goal unit. Due probably to lack of use, holder Joe Restie bobbled the snap, and Mizzou stuffed the resulting emergency pass. Crisis averted, yet again.

As is usually the case, when your offense has missed too many opportunities to score -- men stranded on base in baseball, shots rattling in and out in basketball, good shots not finding the net in soccer or hockey, break points wasted in tennis -- eventually your underdog opponent might find a way to strike. For Notre Dame, in a baffling 0-0 game, the defense finally showed cracks late in the third quarter.

With a couple of screens to Earl Gant, who led the Tigers with 17 carries for 102 yards and four carries for 39 yards, Mizzou moved the ball near midfield. Then, on 3rd-and-10 from the ND 40, Phil Bradley (11-for-18 for 118 yards and, most importantly, no picks, on the day) found David Newman for 15 yards. Three plays generated nine yards, and without flinching, Warren Powers sent on the field goal unit on fourth-and-1. His quote after the game: "No, hell no. I wasn't thinking of going for it."

With 12:50 left in the game, Jeff Brockhaus' kick split the uprights, and Mizzou had an improbable 3-0 lead.

Of course, the game wasn't over. Again, Notre Dame threatened, and again, Mizzou held. The Tigers got the ball back with a chance to run out the clock, but couldn't. At their own 29, Mizzou lined up to punt one last time.

Despite all of Notre Dame's offensive talent, for most of the game, the Irish's best offensive weapon had been Monte Montgomery, Mizzou's punter, he of a one-yard first-half punt. But if you thought recent Mizzou kicker Adam Crossett (who missed a 20-yard chip shot FG in the 2005 Independence Bowl before banging home a go-ahead 50-yard in the fourth quarter) had a flair for the dramatic, Montgomery had him beat. With Mizzou hanging on by a thread, Monte uncorked a 52-yarder. Notre Dame return man Randy Harrison, probably as shocked as everybody else in the stadium, muffed the return. Mizzou recovered, and just like that, they were able to kneel down in Victory Formation and take home the most improbable of victories.

In the end, Notre Dame won the yardage battle (334-288), the first downs battle (18-12), and the overall field position battle. But Mizzou won in turnovers (+3) and testicular fortitude. Notre Dame had advanced inside Mizzou's 25 five times and come away with 0 points. But instead of elaborating further about how momentous this moment was for the Missouri program and its fans, I'll let a Missourian article from September 10, 1978 (my birthday), tell you all you need to know:

SOUTH BEND, Ind. -- Black and gold banners were flying high. Chorus after chorus of that familiar fight song could be heard loud and clear. Strangers were hugging each other.

Yes, by gosh, those Missouri Tigers did it again. The coach's name is different, but tradition remains. It happened against Notre Dame in 1972. Against Nebraska in 1973 and 1974. Against Alabama in 1975. Against USC and Ohio State in 1976.

Once again, Missouri rode inspriation and intensity -- not to mention their defense -- to unbelievable heights. The result Saturday afternoon was a 3-0 upset of Notre Dame in the lion's own den.

The crowd outside the locker room was parted to make way for Linda Powers, the coach's wife. As she walked down the corridor, she was fighting back tears. It was a losing battle. She began weeping.

Moments later, after a big kiss from her husband, Mrs. Powers was escorted outdoors. Under her arm was the game ball.

As soon as it ended, another began.

From the UPI report:

"I can be critical of myself for not realizing that field goals win games," Devine said. "The idea is to win. Of course, our one field goal was not a classic, but we were in field-goal range several times when we went for it.

"But you've got to give Missouri credit for coming up with the big plays. The defense they had been giving us on fourth down was the same as the one they used on third down and we should have been able to handle it. But credit the fine play of the Missouri defense." […]

It was the second victory for Missouri in three games with Notre Dame and the first shutout for the Irish at home since Oct. 15, 1960. Notre Dame lost by shutout at Michigan State, 21-0, in 1965.

And from the AP:

The upset kings of college football did it again.

For hours, police guarded the entrance to Mizzou's Memorial Stadium, knowing that students might try to sneak in and tear down the goalposts like they had in the past. They finally left in the middle of the night. The students sneaked in later that night. 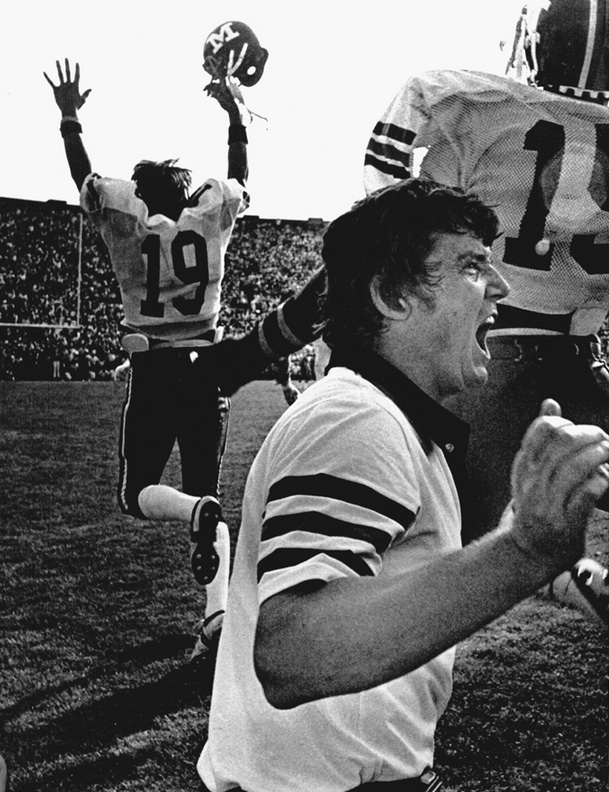