One of the greatest two-way talents in Missouri history, LaRose starred from 1958-60, as an end who could dominate the line of scrimmage, and was also MU's leading receiver as a sophomore and senior. He also punted for MU in 1960. A native of Crystal City, Mo., LaRose won all-conference honors in 1958 and '60, and was a consensus all-America selection in 1960 (made 13 teams), when Missouri beat Navy and Heisman Trophy winner Joe Bellino in the Orange Bowl. LaRose played in the College All-Star Game and Hula Bowl in 1961, then went on to a professional career with the Detroit Lions, Pittsburgh Steelers and Miami Dolphins. He was also an accomplished weight man in track, who held Missouri's indoor shot put record for many years. Lives in Bloomfield Hills, Mich.

A native of Crystal City, Mo., LaRose lettered three years in three sports; football, basketball, and track while attending Crystal City High School. His senior year, he was instrumental in leading their team to the Missouri State Track Championship. Upon graduation, he received a dual scholarship to the University of Missouri for football and track. One of the greatest two-way talents in Missouri history, LaRose starred from 1958-60, as a dominating end on the defensive line and as MU's leading receiver during his sophomore and senior years. He was chosen "Big 8 Conference Sophomore of the Year" and made the "All Big 8 Football Team." That same year in a track meet, LaRose broke Al Oerter’s (an Olympian from Kansas) indoor shot put record. He appeared in two bowl games for Missouri. LaRose was a well-rounded athlete – kicking off, punting, and playing both offensive end and defensive line backer. He was also an accomplished weight man in track, holding Missouri's indoor shot put record for many years. After completing his senior year of football, he was a "Consensus All American", being one of only five in the history of the University of Missouri to receive such an honor. LaRose played in the College All-Star Game and Hula Bowl in 1961, and then went on to a professional career with the Detroit Lions, Pittsburgh Steelers and Miami Dolphins. LaRose was inducted into the University of Missouri Hall of Fame in 1992. 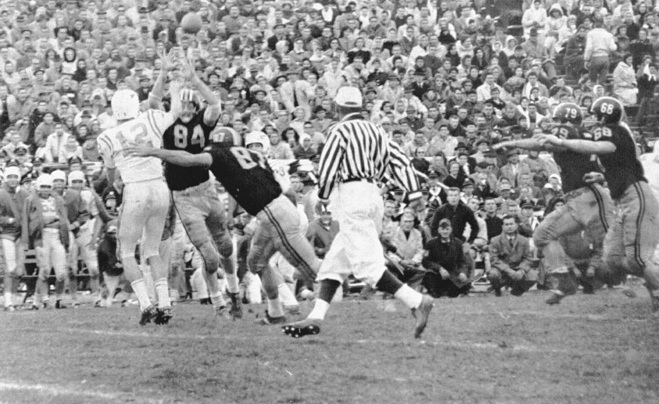 What We Love: Danny LaRose:

While this is really an ode to all of the former Mizzou players who thrived playing both ways ... LaRose was perhaps Mizzou's best in that category.

We remember so many players from that 1960 season -- backs Mel West, Norm Beal, Donnie Smith and Norris Stevenson, quarterback Ron Taylor, etc. -- but we tend to almost forget about the best player on the team. Danny LaRose did most of his damage from the defensive end position, but he still managed to finish eighth in the 1960 Heisman voting and garner 16 first-place votes. Missouri won most games with a stout running game and devastating team defense. But when they needed something extra, LaRose provided it through his work as not only a defensive end, but also a split end and punter.

When Mizzou headed to Pennsylvania to take on No. 20 Penn State on October 1, LaRose staked his Heisman claim. He caught a touchdown pass to help Mizzou ease out to a 14-0 lead, then he tipped a Galen Hall pass that a teammate intercepted. He picked off a pass for himself in the fourth quarter to boot. Then, after Mizzou had moved to No. 2 in the country in November, he sacked Colorado quarterback Garle Weidner to ice a 16-6 win.

In 1960, playing both ways did not garner you any sort of "ironman" recognition -- everybody played both ways. But few played this well on both sides of the ball, and few made as large a mark as LaRose did, helping Mizzou to back-to-back Orange Bowl appearances, lighting the fuse for a flammable defense, and kick-starting the best decade of football in Missouri's history. If that doesn't earn some love, nothing does.

From the AP report following Mizzou's win over Penn State:

But the name that became most familiar to the 35,500 Homecoming Day spectators at Beaver Stadium was that of Missouri end Danny La Rose. It seemed that every spectacular play on offense or defense involved the 6-foot-4, 220-pound senior from Crystal City, Mo.

He scored the first touchdown when he gathered in a pass by quarterback Ron Taylor for 16 yards to complete an 80-yard drive at the start of the second quarter. Before that he had recovered two fumbles in State territory to set up scoring threats.

LaRose also anchored the left side of a stout Missouri line that held State's touted ground attack in check until the game safely in Missouri's favor. […]

State came to life briefly in the third quarter, moving 73 yards in 15 plays for its only touchdown. Galen Hall passed the final three yards to Henry Oppermann. LaRose was among two Missouri defenders who tipped the ball into the air so Oppermann could grab it. 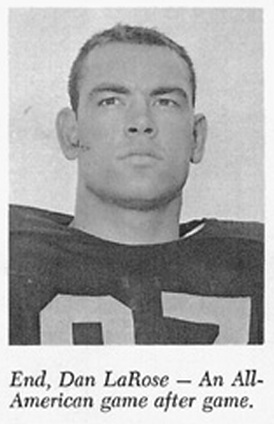 Danny LaRose of Missouri and Mike Ditka of Pitt were selected in a particularly close battle at ends. The deciding factor was their versatility, giving them the votes of 1959 All-Americas Marlin McKeever and Fred Mautino among others.

When you have a chance, go through the Savitar archives a little bit. Pull up the 1959-61 yearbooks, search through to the football section, and peruse the pictures. Danny LaRose is in a lot of them. And in every single one, he is towering over everybody else in the photo, moving downhill with momentum or preparing to. A 6'4, 220-pound end in 1960 was like a 6'7, 260-pound end today. He was blessed with both physical prowess, strength, and incredible timing. He blocked two punts in his first varsity game (1958 vs. Vanderbilt), and he dominated in Missouri's biggest early win of 1960. He was drafted in the second round by the Detroit Lions and hung around in the league for six seasons. He was by any and every definition, one of Missouri's greatest.