He has gone on to be an NFL All Pro, Pro Bowler and NFC champion. He is a many of few words but staggering results. He is the embodiment of what many think a true son is. He is Justin Freaking Smith.

I remember growing up on the Mizzou football teams of the late-'80s and early-'90s, how laughable they were and how the kU game was often times the only watchable one. I remember our home town insurance salesman that worked the chain gang of home games. He was always telling stories of some kid that was going to show up on campus the next year and take us to the promised land. I distinctly remember him telling me about one Kirk Farmer and how he was Johnny Unitas reincarnated.

There wasn't much promise around Mizzou football for quite some time. Then in 1997 things started to look up. An actual team appeared in the black and gold, proudly displaying that block M on the sides of their helmets. The next year, Justin Smith showed up. He was the first true freshman to start every game since 1986.

Smith was a quiet, hard working local "boy" that looked like a man and played like a beast. The Trib's Joe Walljasper recounts his first meeting with Smith:

I vividly remember my first face-to-face interview with Smith the next year. The story was about what was then the unusual occurrence of 12 freshmen arriving on campus early to work out with the team during the summer. Missouri's strength coach, Dave Toub, was gaga over Smith, who broke the school record with a 450-pound power clean before he took his first class. Toub described him as "light-years in front of everybody" and suggested I come to the team facility and catch him on his way in for a workout, which is what I did the next day.

I can't recall the first question, but as it was asked and answered, Smith never really came to a complete stop. As I began to ask the second question, he cut me off.

"Are we about done here?" he asked.

We were just getting started, but, come to think of it, yes, we were about done.

A few months later, I saw him in action. Back then, the newcomers practiced among themselves for a few days before the returning players started. Smith almost comically dominated one-on-one drills. Then the veterans arrived — and mind you this was a good Missouri team with road-grading offensive linemen — and he almost comically dominated one-on-one drills. Never before or since have I seen a freshman that good.

Joe has stuck around Columbia long enough to see some pretty darned good freshman come through since Justin, but I'd love to ask him if he has seen a one that flat out dominated against his teammates quite like that. The rest of the conference took note as well. Smith racked up a few awards that 1998 season: Big 12 Defensive Newcomer of the Year, Big 12 Defensive Freshman of the Year and Second-Team All-Big 12.

After a dominant freshman campaign, he certainly didn't become complacent. Smith was a first-team All-Big 12 player in 1999 and 2000, a first-team All-American in 2000, and the fourth overall pick in the 2001 NFL Draft. While that is all very impressive, his rankings on the all time Mizzou lists are almost as mind blowing.

Smith is now preparing for his 13th NFL season and continues be a bull on the defensive line for the 49ers. His total NFL stats to date are nothing to scoff at:

Teaming up on defense with another all-time Mizzou great (Aldon Smith) has made it that much more fun to root for the him in 'Frisco. Justin has showed throughout his NFL career that he may well go down as an NFL Hall of Famer as well as a Mizzou Hall inductee. 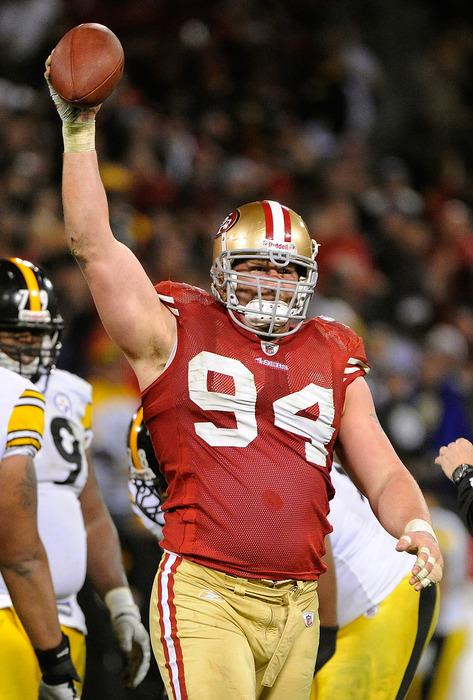 He never really got a chance to prove himself on a national stage, and after a high-profile freshman season playing for an 8-4 team, he toiled in relative anonymity during his final two seasons in black and gold. That's a shame, because a nation of football fans was deprived of seeing this freakishly athletic, unnaturally intense defensive end do his thing for 34 games in a Tiger uniform.

To say the least, the man they called Godzilla made the most of those 34 games. With less help every year, he racked up 259 tackles in three seasons (quick reminder: he was a defensive end!) despite plays being run primarily away from him. He began his career by starting every game on Mizzou's Insight.com Bowl champion, and he racked up 22.5 career sacks, including 11 in his junior year alone (he also had 24 tackles for loss that season). Smith just seemed to get better with the more attention he got from opposing offenses, ending his career in 2000 as a first-team All-American. His size-and-speed combination was something to which Aldon Smith needs to aspire on a daily basis. In his early days, Larry Smith likened him to Junior Seau, and the Cincinnati Bengals basically did the same, drafting him fourth overall in the 2001 draft, the last Mizzou player to be drafted in the top five.

Godzilla's shining moment was, for me, during the Insight.com Bowl, in a play I've described before on RMN. West Virginia attempted a bit of trickery in the form of a good, old-fashioned Statue of Liberty play. Quarterback Marc Bulger faked a pass and tried to hand the ball off behind his back to running back Amos Zereoue. Smith easily got into the backfield (as he did often), then got frozen for an instant by the trickery. Not knowing who to tackle, he simply shoved Bulger into Zereoue, and they both went down for a loss.

Justin Smith simply never took a play off and used his ridiculous strength to his advantage every second on the field. He was not blessed with the best team around him, but he never let it affect his intensity. He is the second defensive player on The Wall, and his stats prove him entirely deserving of such an honor.