The original Split-T quarterback, Steuber was the best athlete in whatever sport he chose to play in a given day.

Missouri's biggest contribution to the sport of college football (other than the touchdown handshake, at least) was Don Faurot's Split-T. But what would have happened if Faurot wouldn't have had the perfect Split-T quarterback from the start? Would he have given up on it? Not unveiled it at all? And oh, the stories we apparently missed with Steuber coming and going before the Twitter era.

From Bob Broeg's Ol' Mizzou: The Story of Missouri Football:

[All-American lineman Darold] Jenkins, who became a B-17 pilot shot down and imprisoned in World War II, was a straight man by comparison with the characters on the team. "Capt. Jenks," later a counsel for the Missouri Highway Department, showed that he still had a bit of the old Tiger in him when he reminisced warmly about Paul Christman and then said of Bob Steuber:

"To this day, I still think that guy was the best athlete ever to go through the University of Missouri. I don't think he ever understood the necessity for training rules. He'd have a beer or two, or get a-hold of some of that 'Boone County homemade,' but it never did slow him down at all.

Steuber was an astonishing athlete as a three-sport letterman who made all-America in football in 1942, his senior year, and should have made it in 1941. The men who selected the teams probably did not want to pick two off the same team. And they had zeroed in, appropriately, as Steuber put it, on the guy he called "Dimples," but to whom, behind his back, he referred respectfully as "Jack Hammer" Jenkins.

Steuber could do incredible things. One Friday he played a baseball doubleheader in St. Louis for Mizzou, caught a bus back to Columbia, drank beer until 4 a.m., it was said, suited up with his Black and Gold thinclads for a track meet, and then went out and won the 100-yard dash, the 220, and the broad jump, and took third in the high jump.

A 9.7 man, powerful and strong, Steuber would have been even more effective if he had run around rather than tried to run over all those enemy secondary men. He would have become a super back in pro football if he had not been slowed by a leg ulcer from the South Pacific in World War II and then suffered a broken back in 1948.

When Don Faurot invented the Split-T formation upon the departure of Paul Christman, he did so with Bob Steuber's skill set in mind. A big, agile back with quick decision-making ability, Steuber embarrassed defense after defense in the early-1940s. After introducing the Split-T late in the first game of the 1941 season, Faurot fully made the switch in Game #2 ... and Mizzou proceeded to go 16-4-1 over the rest of 1941 and 1942. For all the justifiable hype that Christman gets, Steuber was even more successful. He was an ahead-of-his-time athlete for an ahead-of-its-time offense.

A star halfback out of CBC High School in St. Louis, Mo., Steuber lettered at MU in 1940-41-42. He was a two-time all-Big-Six selection, who won all-America honors in 1942, and is one of three Tigers to have their jersey number (37) retired. He still holds six scoring and one rushing record at MU and his 2,030 career rushing yards ranks fifth in school history. That total stood as the MU career rushing record for 28 years. He posted MU's first 1,000-yard rushing campaign in 1942, ranking second in the nation with 1,098 yards. When MU led the nation in rushing in 1941, he was third in the nation with 855 yards. Steuber played in the East-West Shrine and College All-Star games following graduation, then played professionally with the Chicago Bears, Cleveland Browns, Los Angeles Dons and Buffalo Bills. He was inducted into the State of Missouri Sports Hall of Fame in 1968, and the National Football Foundation Hall of Fame in 1971. 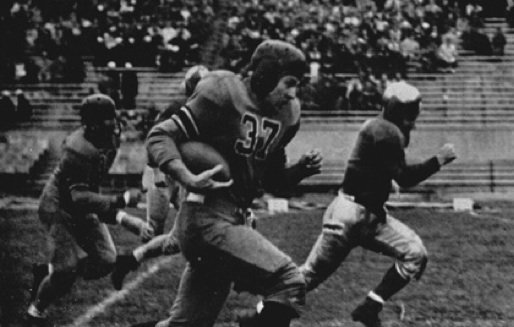 Most points in a season (121). Most points in a career (222). Most TDs in a season (18). Most career TDs (32). Each was a Missouri record unmatched decades after big, fleet-footed halfback Bob Steuber had ended his college career. He was the halfback who made Coach Don Faurot's newfangled Split- T formation work during those days of the early 1940's. Steuber was a 190-pounder who could run the 100 yards in 10.0 seconds - all Faurot needed to put scoring punch in his innovative attack. Playing behind Hall of Fame center Darold Jenkins, Steuber led Missouri to an 8-2-0 record in 1941 and an 8-3-1 mark in 1942. It all happened when Faurot switched him from end to halfback for his junior season. Steuber was third in the nation in rushing yardage in 1941, second in 1942. He was at DePauw in 1943 as a Navy V-6 trainee. DePauw had a 5-0-1 season and Steuber led the nation in scoring with 129 points.