So what's your Brad moment? Everybody has one.

Maybe things would have turned out alright if the young churchgoer from Youngstown had chosen West Virginia or one of the MAC schools pursuing him. Maybe Gary Pinkel's "process" would have generated results with Sonny Riccio and/or whatever other quarterback they may have signed during what became the Smith years. But I don't think any of us want to find out about that piece of alternate history. Even if the wins persisted, we still would have been deprived of watching this man run for four years.

When Brad Smith was inducted into Mizzou's athletics hall of fame in 2011, Dave Matter wrote a piece for the Trib that was lovely even though it included me. In it, I tried my best to describe what made watching Smith so special and unique.

"What made Brad unique was just the artistry involved with his abilities," said Bill Connelly, who writes for the MU fan blog Rock M Nation. "A lot of times great players are great in almost standard ways. But seeing him run was such a unique thing. Beyond that — and this sounds like the way Bill Simmons talks about Larry Bird — but after a while Missouri fans could see the runs happen before they actually happened. You could see if he gets that block he’s going to juke that guy and get in the open field. You started anticipating these things. That made it a really rewarding experience to watch him over the course of four years."

There were so many Brad moments, so many instances that we remember from games that we don't. There were the "Who the hell is this guy??" runs against Illinois, the ones that made John Kadlec's voice crack in the radio booth.

There was the tightrope act of all tightrope acts against Troy in 2002, where he slowed up and acted like he was running out of bounds, then burst ahead for another 20 yards.

There was the juke he threw on the Oklahoma safety in a go-ahead, fourth-quarter run in 2002.

There was the game-winning, one-yard plunge in College Station.

There was the throwback catch-and-run against Nebraska in 2003, followed by the sideline touchdown that kick started the fourth quarter, one of the most perfect quarters in Missouri history.

There was the 36-yard burst against Iowa State in 2004, one that both eventually prevented ISU from winning the North and announced that, after a ridiculously frustrating year, the old Brad was still in there somewhere, waiting to erupt.

There was the 59-yard eruption down the right sideline against Oklahoma State in 2005, one that led to a score that all but iced the game.

There was the absurd Independence Bowl rally against South Carolina, his punctuation mark, set up by another 59-yard run late in the fourth quarter.

There were the ridiculous stats (first player to ever average a 2,000-yard passing and 1,000-yard rushing season over the course of a career) and honors (his MUtigers.com profile is quite cluttered).

But for me, the ultimate Brad moment, the one I think of first, was a random home game from his sophomore year. Playing against, and whipping, a Mike Leach team is always fun. But Brad made it something more.

No player on any team during the 2003 season ran up a day like Smith enjoyed against Texas Tech on Oct. 25. He needed only 19 carries to shred the Red Raiders for 291 yards, the NCAA high for that season and just 17 yards shy of the single-game NCAA record for quarterbacks. He could have gone for more yardage, but five times he had to cut runs short — in the end zone.

When he juked out the cornerback on that final touchdown run, I remember actually releasing an "Aww." I felt bad for Tech at that point. It was just unfair that one person was doing this to their entire defense. But I enjoyed it in the same way that I enjoy running up the score on hapless video game opponents on Rookie mode; we all have a cruel side. 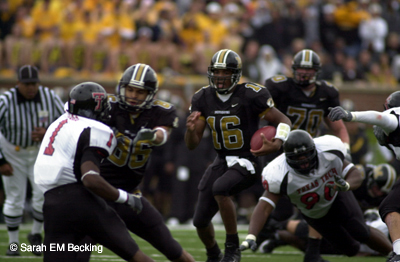 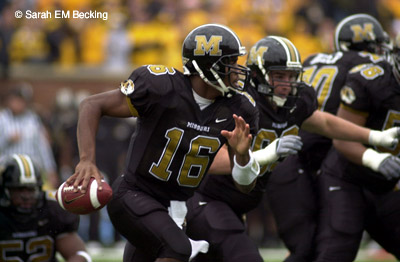 So what's your Brad moment? Everybody has one.