Tony Temple's career at Missouri was a curious one. The running back from Rockhurst High School was Rivals.com's No. 79 recruit in the 2004 class. He was a legend by his freshman year in high school, and he finished his high school career with nearly 6,300 rushing yards. From a Rivals article the February of his junior year:

There has been a buzz humming throughout Kansas City for the past three seasons. From the day that Tony Temple at Kansas City (Mo.) Rockhurst stepped on the field, fans have been awaiting his senior season and his recruitment. Now that both are on the horizon things are about to get fun.

Simply put, some college coaches think Temple might be the best high school football player in Kansas City history and his stats definitely back up that claim.

Random off-the-field drama caused his recruitment to slow a bit, but on January 5, 2004, on Metro Sports in Kansas City, Temple donned a Missouri hat instead of a Kansas State hat. His freshman season consisted of just six carries and 13 yards at Nebraska. He was injured, then had his redshirt torn off midseason, then was injured again. He rushed for 100 yards against Baylor in 2005, 119 versus Murray State in 2006, and 168 versus New Mexico in 2006, but toward the end of his junior year, he hadn't even come close to measuring up to the hype surrounding him. His stats were alright, but they were far from other-worldly, and fumble issues kept him off the field at times.

But he finished that season by decapitating Kansas' Justin Thornton in the middle of a 72-yard performance against Kansas, then rushing for 194 yards and two scores in a fun Sun Bowl versus Oregon State. And he followed that up with 123 yards against Ole Miss and 101 against Illinois State in September of his senior season. Things were finally rounding into form ... and then he got hurt. He carried 11 times for 38 yards in the next three games, then managed just 10 for 27 in a destruction of Colorado. The 2007 squad was taking off, and he wasn't really a part of it.

As with 2006, however, he saved his best for late in the season. He rushed for 141 yards against Texas A&M, 75 and two scores versus Kansas State, and 98 in the historic win over Kansas. He headed into what might be his final game (we didn't know for sure at the time -- Mizzou was going to attempt to get him a medical redshirt for 2005) with a perfectly decent 2,271 career rushing yards, 29 receptions, a few decent kickoff returns, and 19 total touchdowns. That's not four-star quality, but it's not bad.

And then the Cotton Bowl happened.

By the afternoon of January 1, 2008, Tony Temple was a Mizzou Legend. After 24 carries and 281 yards, he was also the single-game Cotton Bowl rushing record holder. That he scored on the last play despite an injury just made all the more surreal. In the Sun and Cotton Bowls, he combined to rush for 475 yards and six scores. He finished seasons as well as anybody in a Tiger uniform ever has.

The Cotton Bowl win itself is not on this list, nor is Temple for his career as a whole. But Temple's exploits on a lovely January morning in Dallas were beyond great.

That was a fun trip. We should do that again sometime. 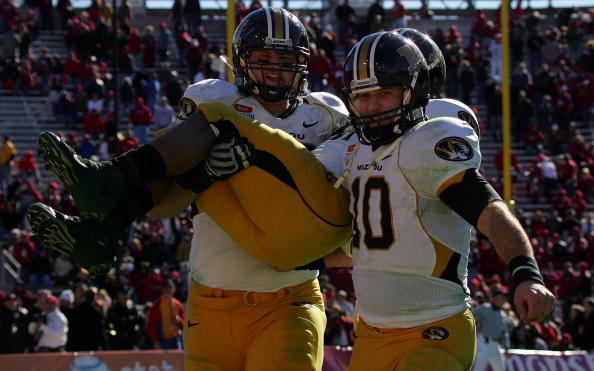