Clarence Gilbert had zero regret with chucking up a bad shot. Sometimes he was hot, sometimes cold. Against Kansas on January 22, 2000, he was on freaking fire.

Share All sharing options for: Mizzou's Greatest, #79: Clarence goes off

There were 14,098 people in the Hearnes Center on that January afternoon. They all got to see a man amongst boys, a ball player that was feeling it like almost no other before him had at Mizzou. Kansas was ranked eighth in the country and sported a 15-2 record. They lost 81-59. And after Mister Gilbert ran roughshod all over them, the Jayhawks finished the year on a 9-7 run, losing in the second round of both the Big 12 and NCAA tournaments. They were also unranked in the final polls. Clarence emasculated the 2000 Jayhawks, and they never recovered.

On the day, Gilbert went 10-for-18 from the floor, a stupid 7-for-10 from behind the 3-point line, and somehow only got one shot at the line, which he missed. He was also feeling it elsewhere on the court that day -- he racked up six boards and four assists. Clarence finished the day with 27 points, although watching the video it looks like he could have rung up 40 if he had played more than 30 minutes or if the game had been closer.

Just take a minute or four and a half and watch the clip below:

Here's the play-by-play from the run we all remember: 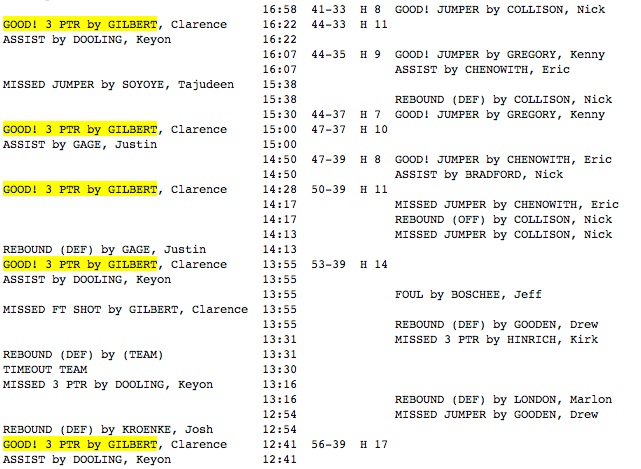 There is a possession that begins at about the 1:30 mark of the video. Mizzou has the ball just on their side of mid court. The Tigers try to set something up. Nothing doing, drive the basket and defense collapses. They dish it to the left wing, defense flexes out quickly, try to drive back in again and again nothing. All of a sudden the ball is flipped back out to what looks like two guys. Gilbert grabs it, stutter-steps right and sees the smallest window as two Jayhawk defenders follow a Tiger to the top of the key. As Mike Kelly would say, SPLASH! He hits another 3.

Mizzou has had a lot of players who were fun to watch for any number of different reasons during their time. Brad Smith and Keyon Dooling were athletic freaks. Ben Askren and Chelsea Thomas utterly dominated their competition. Clarence Gilbert stands out in my mind as that one guy, that one player who just didn't give an eff about what the score was, what the situation was. If Clarence saw an open shot, it would be disrespectful of him not to take that shot.

I loved watching Gilbert shoot. It's what he was meant to do, and damn, am I glad I got to see him do it in the Black and Gold.