Quite frankly, we don't show enough respect to the lower-revenue sports, not at Rock M Nation or anywhere else on the Internet, really. We try to do better than most, but when it comes to lists like this, we're going to be quite obviously prone to overrating things we have seen and heard more of in our lifetimes, be it recent teams and players or the most glorified historical teams and players.

This is all a way of saying that Renee Kelly is probably underrated on this list. She is the greatest player in the history of the Mizzou women's basketball program, and only one player comes even close to her. She ranks second in career scoring (with 2,119, she is one of just two Mizzou women to have scored over 2,000 points), first in points per game (17.4), second in field goals made (819, and just fifth in field goals attempted), first in field goal percentage (.566), first in free throws made and attempted (481-for-792), first in rebounds (1,098), second in rebounds per game (9.0), seventh in blocked shots (118), and even 10th in steals (177).

Kelly was an All-American in 1987 (but somehow not in 1986) and the two-time Big 8 player of the year (with Davis, Mizzou won the player-of-the-year award four straight years). She was conference tournament MVP in 1986, a second-teamer on the conference's all-decade team (Davis was first-team), and was named the conference's overall female athlete of the year in 1987.

Oh yeah, and Mizzou won a lot when Kelly was there. The Tigers won three Big 8 titles and reached the NCAA Tournament three times, beating Arkansas in the first round in 1986. This was the peak of the Joann Rutherford era in Columbia, and Rutherford was quite a successful coach.

In the pre-WNBA days, Kelly played professionally in Italy and Brazil, then returned to her hometown of Augusta, Georgia, to coach and teach. 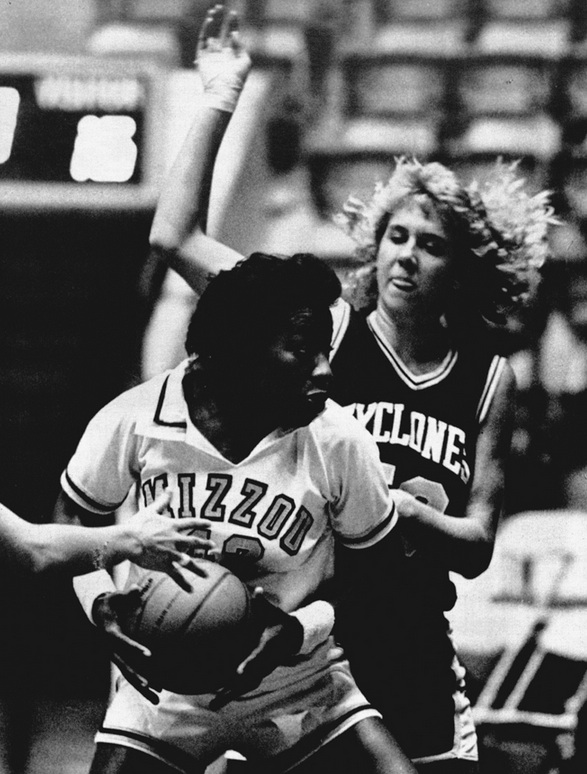