Share All sharing options for: Mizzou's Greatest, #53-52: 2009 Mizzou basketball and the DeMarre-Kimmie picture

Sometimes a team connects with you in a way that transcends its record. And sometimes that team's record is pretty good, too. In 2008-09, the stars aligned for Missouri in a way they hadn't in quite some time, and the result was in many ways magical.

The funny part about the 2008-09 season is that we still didn't know what we had in mid-January. We were annoyed by late-game faltering in a loss to Xavier in the Puerto Rico Tip-Off. We were put off by yet another loss to Illinois, a 16-point defeat that came one day after Mizzou had entered the Top 25 for the first time in almost five years. We were relieved to have barely survived with a seven-point win over a bad Georgia team. We were disheartened, and in no way surprised, by another loss in Lincoln. 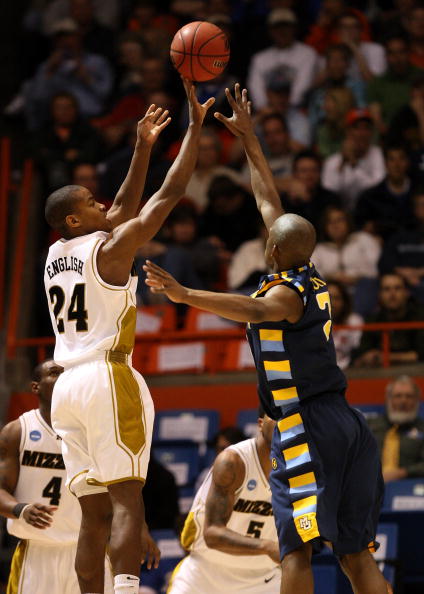 Anatomy of a Magical Season

First came the game in Stillwater, an incredible, ridiculous win over Oklahoma State that saw 30 of the greatest minutes Mizzou had ever played, followed by 10 of the worst; the Tigers sprinted to a 75-55 lead, ripping off steal after steal with Matt Lawrence knocking down one 3-pointer after another. But with three Cowboys scoring 20 or more points, OSU not only didn't go away, they came all the way back. A 20-point lead with 12:30 left became a 13-point lead just two minutes later. Mizzou pushed it back to 17, but OSU pulled within 11 with seven minutes left. Mizzou pushed it to 15 with 3:50 left (!), but OSU went on a 13-1 run in barely over a minute. It was 96-95 when Zaire Taylor committed a turnover and OSU's Byron Eaton, a Mizzou killer through the years, missed two point-blank shots. Leo Lyons stole the ball from Eaton, but J.T. Tiller made just one of two free throws; OSU had a shot to win at the buzzer but missed. That Mizzou fell apart, however, wasn't the story; it was that the Tigers had found out a way to win anyway, especially away from Mizzou Arena.

Two weeks later, with Mizzou 18-4 overall, the Tigers went to Austin and won there, too, as Taylor, an unheralded transfer from Delaware, began to form his reputation as a late-game killer.

And less than a week after that, Kansas came to town. After a nervous, ugly first half -- halftime score: Kansas 30, Mizzou 16 -- the Tigers clawed back, slowly but surely. Kim English, then a freshman, scored six points early in the second half to spark the team and cut the lead to eight. But the lead was 13 again when the Mizzou defense went to work. Two Demarre Carroll free throws, a turnover, and two Keith Ramsey free throws. A steal and two Leo Lyons free throws. A turnover and a Lyons jumper. A steal and a Lyons layup. A steal and two Taylor free throws. In three minutes, Mizzou went on a 12-2 run to cut the lead to three … and Kansas immediately pushed it back to 11 with eight minutes left. Carroll made an unlikely 3-pointer to make it a 54-51 game with 5:30 left, but AGAIN Kansas extended the lead.

When Kansas' Cole Aldrich made two free throws to give KU a 58-51 lead with 3:49 left, hope was dwindling. But the Jayhawks would score just two points the rest of the way. Goose Lawrence made a surprising putback with 3:38 left, and Lyons stole the ball from Aldrich. Lyons missed a jumper, but Sherron Colins turned the ball over, and a Carroll layup made it 58-55. Aldrich missed a jumper, and J.T. Tiller made a free throw.

Kansas still led by two when Sherron Collins went to the line for two free throws with 1:48 left. It was at this moment that I'm pretty sure Mizzou Arena made more noise than it ever had and ever will. The building was rattling, the sound so shrill that I had to hold onto the person next to me to avoid getting dizzy and falling over. In this environment, I don't know how ANYBODY could make a free throw. Collins missed both. Lyons made two more free throws, and the game was tied. Tiller made a jumper with 48 seconds left to give the Tigers their first since it was 11-10 eight minutes in, but Mario Little responded with a jumper from the baseline. That set the table for this.

The wins kept coming when Kansas left town. Mizzou beat Nebraska by 23, beat Colorado by 13 in Boulder, then whipped Kansas State by 20 in revenge for an earlier defeat. Kansas got its revenge in Lawrence on March 1, but Mizzou's 73-64 win over Blake Griffin and Oklahoma on March 4 gave the Tigers 25 regular season wins.

That became 28 wins when Mizzou won the Big 12 tournament a week and a half later.

The win over Memphis featured a career offensive performance from Tiller (23 points on 10-for-16 shooting after he was injured in the closing moments against Marquette), 11 free throws and 12 rebounds from Leo Lyons, three 3-pointers from Matt Lawrence, 17 points on 6-for-11 shooting from Carroll, 14 points on 5-for-7 shooting from Taylor, a three-quarter-court halftime buzzer beater from Marcus Denomn, three key jumpers (including a 3-pointer) from Justin Safford, six free throws from English, and even 13 key minutes from Miguel Paul. Mizzou sprinted to a 64-40 lead with 16 minutes left, then held on as Tyreke Evans and John Calipari's Tigers mounted a comeback.

At the buzzer came a moment worthy of its own spot on this countdown.

In the ultimate, senior-to-freshman moment, DeMarre Carroll handed the ball to Kim English, who tossed it into the air. It created this picture, one of the greatest a sport could ever produce.

Do your eyes still well up a little looking at that? (Ahem), mine neither.

Two days later, Mizzou's season came up about eight minutes short. A Lyons jumper tied the Elite Eight matchup with UConn at 54-54 with 8:33 left, but the Huskies would build a lead and never relinquish it. The Tigers fell, 82-75, and while that is an important footnote, it only diminishes the team's accomplishments so much. Because what this team accomplished was only so much about the product on the court; the product mattered, of course, but the way this team reconnected the basketball program with the community at large, the way it made Mizzou fans truly care about basketball again … that was the lasting impression.

Laurence Bowers and Steve Moore reading to kids in classrooms.

DeMarre Carroll and Keith Ramsey streaming into the crowd even as the crowd streamed onto the court following the Kansas win.

The welcome party when the Tigers returned from Oklahoma City as conference tournament champions.

This was an incredible run. This was an incredible team. And even as we continue to lustily boo Mike Anderson every single time he returns to Mizzou Arena -- and hopefully he will for years to come, really -- he delivered this season to us. That will always mean something. (That he has since delivered a hell of a start to a conference rivalry makes it all the better.)