Alabama had not lost a regular season game in two years. But the Tide never had a chance that Monday night in Birmingham.

As has been already said at one point or another on this countdown, you don't necessarily get to choose when you peak. For Missouri, the outright peak of the 1970s, and honestly perhaps the program's best ever single-game performance, came in Birmingham, Alabama, on a Monday night in September 1975.

Peruse the entire Tuscaloosa News from 9-9-1975 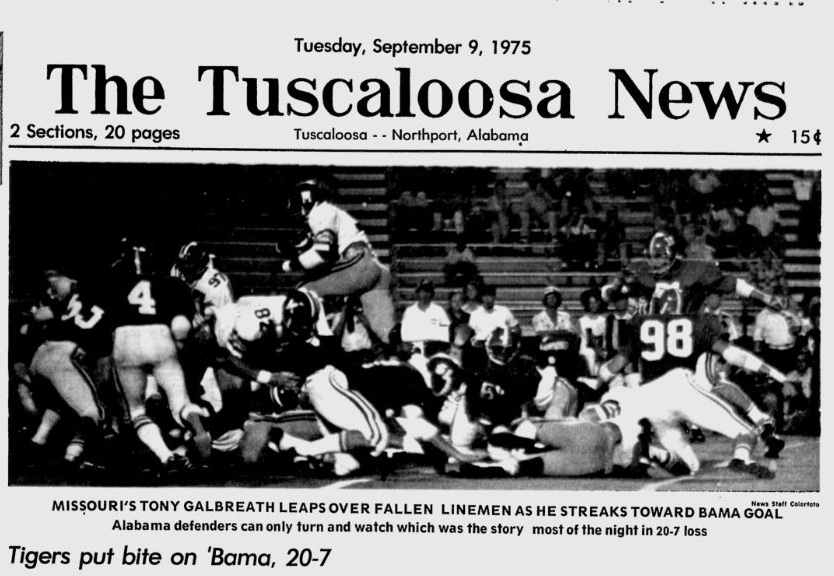 "It was no fluke. Missouri, a decisive underdog, lined up jaw-to-jaw with a national power and whipped it."

In 1973-74, Alabama had gone 22-0 in the regular season, with two bowl losses to Notre Dame spoiling what were otherwise a pair of incredible years. Notre Dame aside, Alabama had outscored opponents by an average score of 35.1 to 7.8. Over a five-week span in 1974, the Tide outscored opponents, 162-16. The Bear Bryant defense was as good as ever, and in recent years, the Tide had begun a second peak for the Bryant era by mastering the still-new Wishbone.

Alabama was an absolutely devastating team; in the 11 games that followed the game with Missouri, the Tide would once again catch fire, ripping off 11 wins with an absurd scoring margin of 367-52. But in front of a nationally televised audience on September 8, the Tide got absolutely thumped by Al Onofrio's Missouri Tigers.

Just seven minutes into the game, Missouri had already made a statement. The Tigers held Alabama to a three-and-out, then ground out a 12-play, 58-yard touchdown drive to go up, 7-0. And after another failed Alabama drive, a 17-yard run by running back Tony Galbreath set up a 44-yard field goal.

With 12 minutes to go in the first half, the Tigers struck again. Safety Jim Leavitt recovered a fumble at the Alabama 32, and Mizzou needed eight plays to hammer out another scoring drive, capped by a nine-yard, up-the-middle run by fullback John Blakeman. A 46-yard field goal by Tim Gibbons gave the Tigers a stunning 20-0 lead with time to go before halftime.

For the game, Galbreath finished with 120 yards on 32 carries; his 89 first-half yards set a pace that Alabama simply couldn't match. Mizzou scored on four of its five first-half possessions, and Alabama never threatened to make up the difference. For the game, Alabama rushed 34 times for just 31 yards. Thirty-one! The Tide managed just 118 yards for the entire game, finally scoring early in the fourth quarter.

The second half was a formality, at least the Mizzou defense made it that way. Twice, Mizzou fumbled deep in their own territory, and a botched punt snap gave Alabama yet another opportunity, but the Tide would only score once, on a deflected touchdown catch by Ozzie Newsome. Led by tackle Keith Morrissey, who had three second half sacks, Mizzou would not let Alabama even think about coming back into the game.

When it was over, Columbia erupted. Students filled the Quad, where fireworks were shot and Marching Mizzou showed up. The impromptu parade spilled into downtown, where somebody etched "Missouri 20, Alabama 7, 9-8-75" into fresh cement. You just simply did not do to a Bear Bryant team what Mizzou did to them that Monday night. This was the only game 'Bama would lose in 1975.

You just simply did not do to a Bear Bryant team what Mizzou did to them that Monday night.

After the game, Bear Bryant was both gracious and incredibly humbled.

"They kicked the hell out of us. What more can I say?"

"I think we were pretty fortunate not to be beaten worse. They beat us worse than the score indicates."

"All in all, it was a good old sound country beating."

Of course, Missouri wasn't really as good as it suggested that night. The Tigers leaped to No. 5 in the polls following the Bama beating, but the schedule was just too rugged for them to maintain their momentum. After wins over Illinois and Wisconsin, Mizzou fell to No. 12 Michigan, beat No. 14 Oklahoma State, then lost to No. 12 Colorado, No. 3 Nebraska, and No. 6 Oklahoma. An exhausted, 42-24 loss at Kansas wrapped up a tantalizing but terribly disappointing 6-5 season. The next year, Mizzou would beat both No. 2 Ohio State, No. 3 Nebraska, and No. 8 USC … and once again finish 6-5.

Mizzou could never sustain the momentum it generated from these mid-1970s upsets, but wow, were these upsets impressive. And none were more impressive than the night Mizzou headed down to Birmingham and handed Alabama its only regular season loss in three years.