One of the best Missouri running backs and defensive backs of all-time in an era when players didn't actually play both ways.

Missouri's history is rich with quality ball-carriers, from Harry Ice and Red Wade in the 1940s, to Norris Stevenson, Mel West, and company in the late-1950s and early-1960s, to James Wilder in the late-1970s, to Darrell Wallace in the 1980s, to the four-headed backfield of the late-1990s, et cetera. But only two Mizzou running backs have had their jerseys retired at Memorial Stadium: Brock Olivo and Johnny Roland. Olivo's retirement was a source of controversy, derived as much from symbolism and special teams accomplishments as running prowess. Roland's on the other hand, had no controversy whatsoever. He was just too damn good to keep off the wall. Missouri stole him from Oklahoma's clutches in the early-1960s, and he was the gift that kept giving.

First, he was the best offensive weapon on what might have actually been Missouri's best football team of all-time.

In the 1960s, letters of intent were not binding. Thank goodness, because if they were, a certain member of the Corpus Christi Class of '61 would have ended up a Sooner instead of a Tiger. Johnny Roland initially signed with Oklahoma before later experiencing a change of heart. […]

Simply put, as a sophomore Roland was the Missouri offense. He would end up playing All-American caliber football at both defensive back and running back for Mizzou, and he is one of the Tigers' all-time greats. Neither the 1962 nor 1965 seasons would have been anywhere near as successful without him.

And after sitting out the 1963 (he was accused of stealing a pair of tires, a charge that was eventually beaten down), he returned in 1964 to play defensive back (and short-yardage back on offense, and kick/punt returner on special teams). He was selected to the all-conference team. In 1965, as the team's first African-American captain, he was a featured running back and picked off six passes. Mizzou used him in every conceivable way, and he produced wherever Dan Devine put him.

Johnny was highly intelligent and was an excellent student. He was a two-way player, also excelling as a defensive back. Johnny was the first black to become captain in any sport at Missouri, and he was just a ferocious team player.

I always accused Johnny of taking notes. Whenever a player didn't know what to do or had a question, he went to Johnny. Everything on our schedule was timed out to the minute, and Johnny always knew exactly where everybody was supposed to be and when they were supposed to be there. He had to have a photographic memory; that was the only explanation for his knowing everything that he did. Johnny broke onto the scene as a sophomore, when he scored three touchdowns in his first game, at California. That was just an indication of how good he was going to be, and he maintained that high standard throughout his entire career.

From Roland's Wall of Excellence profile:

You go with it at first. Reading 1964 and 1965 game summaries, his name is absolutely everywhere. Johnny Roland picks off a pass. Johnny Roland rips off a huge punt return. Johnny Roland scores two touchdowns on the ground. But then you realize ... this was the mid-1960s. Guys didn't play both ways anymore. Oh, but Roland did. One of the best defensive backs and running backs in Missouri's history, Roland, who chose Mizzou over Oklahoma at the last minute, did whatever his team needed over three amazing seasons. As a halfback, he was the conference's leading scorer and an all-conference performer in 1962, rushing for 830 yards and 13 touchdowns; in the ultimate pre-cursor of what was to come, he ripped off 171 yards over 20 carries in his Mizzou debut.

Then, after a "tire-swapping incident" got him initially dismissed from school, then just suspended for the 1963 season (he was accused of swapping his tires with those of another student, though Dan Devine always maintained that he was covering for a teammate), Roland did a little bit of everything in 1964 and 1965. With Charlie Brown taking the lion's share of the carries -- Brown was good enough to still rank 10th in career all-purpose yards for Mizzou -- Roland became a short-yardage and goal-line back (at 6'2, 207 pounds, he was the equivalent of about 6'4, 230 today), led Mizzou in punt returns (1964-65) and kick returns (1964) ... and oh yeah, he became an All-American cornerback as well. His six interceptions in 1965 have only been topped twice in Mizzou history: first by Roger Wehrli (seven in 1968), then by William Moore (eight in 2007).

Though Mizzou perhaps has more lax standards than most, it still takes quite a bit to get your number retired at Ol' Mizzou. Simply being a good ball-carrier? Mizzou had plenty of those in the sixties. No, Roland got No. 23 retired by doing absolutely everything, leading Mizzou to a 1966 Sugar Bowl title and performing at the highest possible level on both sides of the ball in a time when men just didn't do that.

A halfback from Corpus Christi, Texas, Roland lettered at MU in 1962-64-65, and was an all-Big Eight choice all three years. An outstanding two-way player, Roland was team captain and all-American in 1965. Following that season, he played in the Senior Bowl, Coaches All-American Game and College All Star Game. At MU, he led the Tigers in rushing and scoring in 1962, in punt returns in 1964-65, in kickoff returns in 1962 and '64, and in pass interceptions in 1965. Roland ranks 10th at MU in career scoring, and led the Big Eight in scoring in 1962. He played with the St. Louis Cardinals of the NFL from 1966-72, earning the league's nod as "Rookie of the Year" in `66 and with the New York Giants in 1973. 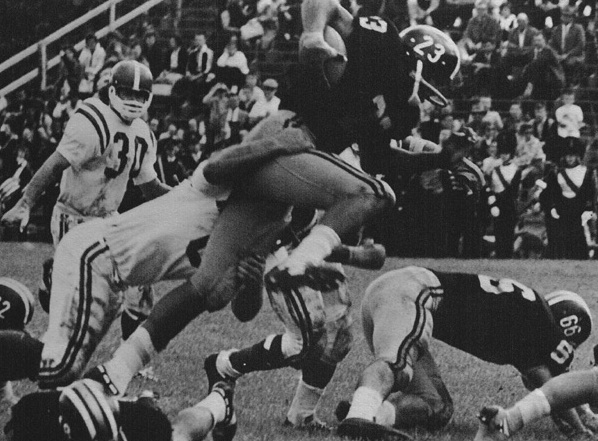