The Band-Aid Man was one of a kind.

Derrick Chievous settles into a booth at the G&D Pizzeria, the closest thing to New York City one can find in Columbia, Mo., and orders a seven-ounce sirloin, a side of ranch toast and two glasses of iced tea, into which he empties 25 individual packets of white, refined, death-before-your-time sugar.

"I love sugar," says the high-scoring, board-pounding forward for the University of Missouri Tigers. "Ten Twinkies and I'm energized. Then, once I'm up and all the sugar's gone, I go into down syndrome. Listen to some records, old-time records. I was born after my time. I should have been born in the Cooley High days, with the shoo-bop-de-bops and the ooh-baby-babies."

A waitress soon brings another iced tea, which Chievous fortifies with the last of the sugar packets. Then he rattles on about the Tigers, whom he has led to an 8-5 start: "They got in on me late, so when I came here everybody thought they'd dropped a Lamborghini on me. I wish they had. Doing all that work, spending all that time—practicing every day, diving for loose balls...." The sugar is just taking effect.

About the media, of which he considers himself a member, he says: "I'm beginning to wonder if they think I'm ugly. They can't even hook me with a picture. My mother says, 'Oh, but they wrote something nice about you.' But no picture. And you see these monsters on the magazine covers—soooooo appealing."

That is the start of one of the best Sports Illustrated pieces you'll ever read. I was 8 when I first saw it, a Mizzou fan in Oklahoma who didn't actually know much about Mizzou. Derrick Chievous was the coolest player an 8-year old could think of, and he made me think, even more than before, that Mizzou was where I belonged. It was a place where weirdos like Derrick Chievous could hang out in town, then go score a million points per game on the court.

Derrick Chievous captured the imagination. He was built like an alien (6'7, 187) with an inhuman ability to put a ball in a basket in one way or another. He showed up at a time when Mizzou desperately needed a new identity in the post-Stipo-and-Sundvold universe, and he provided a team's worth of it all by himself. It took a while for Norm Stewart to build a team around him -- he averaged 13.1 points per game as a freshman, but Mizzou went just 18-14 with little to no bench or ball-handling ability -- but when he did, Chievous became a star.

As a sophomore, he averaged 19 points and eight rebounds on a team that went 21-14 and reached the NCAA Tournament for the first time in three years. As a junior, he averaged 24 points and nine rebounds on a team that won the Big 8 and finished 24-10. And as a senior on a team that began the season eighth in the country but finished a disappointing 19-11, he still poured in 23 points with nine rebounds. He got to the line an absurd amount (seven free throws per game in his junior and senior seasons), he finished around the rim, and when the 3-point line was introduced for his junior year, he made 3s too (he was 30-for-66 on longballs in his career). He was weird and likable, a volume scorer who didn't mind getting dirty, and an incredibly intense rebounder who battled against bodies a lot bigger than his own. He was the bridge between Stipo-and-Sundvold and Smith-and-Peeler. He was one of a kind.

And yes, he was in this video, too. Of course he was.

A rare character, but Derrick Chievous’s basketball skills were rarer still. Effective inside and out, and possessing a nearly supernatural ability to get to the free throw line, the high school All-American was born to score.

Chievous came out of Jamaica, N.Y., and burst on the Missouri basketball scene in 1985. He went on to become the leader scorer in Tiger basketball history with 2,580 points, and posted three of the top-ten season scoring figures in MU annals. He led the Big Eight Conference in scoring as both a junior and senior, and led the Tigers to the league regular-season and post-season tournament championships in 1987. He was a Freshman All-American in 1985, consensus second-team all-American in 1987, all-conference in 1987 and '88, and was twice MU's most valuable player. He is one of only two players in school history to lead the team in scoring three times, and holds a host of other school records. A first-round draft choice of the Houston Rockets in 1988, Chievous also played in the NBA with the Cleveland Cavaliers, and in recent years has played professionally overseas. 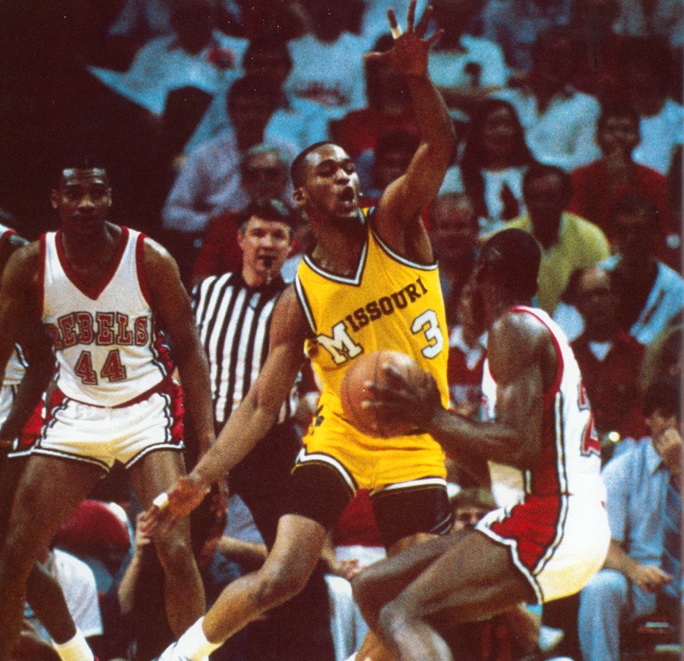