He had talent, looks, charisma, and a top-notch nickname. Pitchin' Paul Christman was Mizzou's first star quarterback (first football star, period, really), and while at Missouri, he attracted a level of national consciousness that had not previously existed for Don Faurot's Tigers.

We tend to remember history as individual people and events, not necessarily how they all fit together. With both his presence and his absence, Christman had an incredible impact on Faurot's general tactical flexibility. With him in uniform, Mizzou opened up the passing game more than just about any team in the country in the late-1930s. Blessed with both a cannon for an arm and granite blocks for feet, the relatively immobile Christman became a pocket passer in the era of the Wing-T. And when Christman left, seeing nobody even remotely capable of running the same system in his absence, Faurot tinkered with what eventually became the Split-T and set rushing records. 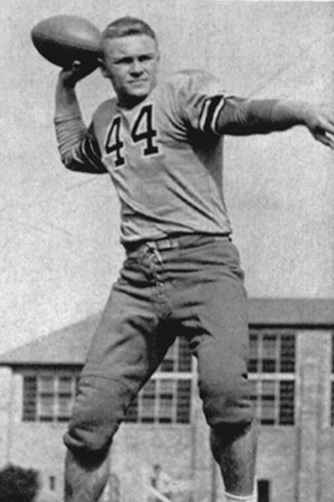 With a speedy set of skill position players, Faurot figured out how to both develop and make the most of Christman's still-dynamic skill set. From Christman's National Football Foundation hall of fame bio:

He was slow afoot and not at all what you would expect a quarterback to be. But Paul Christman could throw the football, and that was all that mattered to Missouri coach Don Faurot. Christman led Mizzou to national prominence and 20 victories in his 28 varsity games. Along the way, the tall blond bomber established Missouri passing records which stood for nearly 30 years. "I knew I was awkward," Christman confessed later. "Coach Faurot knew I had to be able to run to make my passing effective, so he spent hours in the off- season, working with me on quick starts and short sprints. I actually improved my speed. Christman ran the ball an average of 10 times a game and passed it 16 times. He made four All-America teams in 1939 and led the nation in touchdown passes, 13, in 1940.

The growth was slow in 1938, but everything came together for a miraculous run in 1939.

Missouri Football didn't exist before 1939. I mean, it existed. Sure it did. They won nine games in 1899. Under Gwinn Henry, they won three conference titles in the good old days of the Missouri Valley Conference. But on a national scale, they were an afterthought. They were Wiley College, or maybe Bemidji State. Their fans loved them, and they played hard and won some good games, but they simply were not part of the national spotlight.

In 1939, however, that changed. Missouri introduced itself to the world as a real, living, breathing football program with serious power potential. They beat ranked teams for the first time (granted, the AP had only been ranking teams for about three years, but a first is a first). They won their first outright Big Six title. They qualified for their first bowl game. They took in the national spotlight and romped a pretty good NYU team in Yankee Stadium. They played in three games that could be considered Mizzou Classics. And perhaps most importantly, they had their first nationally-viable player in Pitchin' Paul Christman, a man around whom you could build a program.

"He'd come into a huddle, see that the team was tense, and he'd loosen 'em up with something crazy," recalled Bud Orf. "Like, 'Hey, Bud, your zipper is open.'"

Smiling, Orf continued, "I've often thought how Faurot was considered conservative and a disciplinarian, but, proving that he was indeed a good leader, he gave Paul considerable leeway. And we all profited from the flexibility."

For instance, the 6-1, 170-pound Orf moved out on his own to become, in effect, a split end before the alignment generally was accepted or recognized.

"If the tackle came out, I'd move inside him," Bud said. "If the linebacker didn't come out, I'd tell Dooz, 'Five yards and out,' and he'd throw right on the money."

Orf's smile widened. "Probably," he said, "this won't sound sophisticated enough for present-day coaches or players, but our aerial game was most effective with what I'd call roughly 50 percent pass patterns and 50 percent improvisation.

"After all those years together, I could say to Christman, 'Count to six and I'll be there.' I'd make my move, counting, turn around, and there it would be--a strike."

The 1939 season was magical 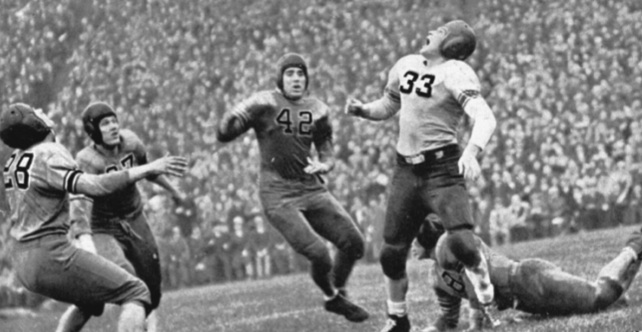 Against Nebraska in 1939, he told Broeg that he would "pass those bums out of the stadium by the half." And then he went out and did it.

As they say, it's not bragging if you back it up. Nebraska came to town hoping to further their cause for a potential national title. Instead, they got run off the field (or, if you prefer, passed out of the stadium). Nebraska was ready for a steady dose of Christman's arm--instead, in front of 18,000 Tiger fans, they got Christman's and Bill Cunningham's legs. Mizzou ran to set up the pass, and it worked beautifully. Christman only completed four passes in the first half--for 116 yards and three touchdowns. From the Nebraska 20, he completed a pass to Bud Orf, who fumbled...and his brother Bob scooped it up for the touchdown. After NU tied the score at 6-6, Christman found Bob Orf, intentionally this time, for a 60-yard bomb. Up 13-7 in the second quarter, one play after he had scrambled for a 28-yard gain, Paul rolled left, then threw right, pitching to a wide-open Stillman Rouse for a 20-yard touchdown to put Mizzou up 20-6 at halftime.

Here's a reminder: Nebraska was really, really good in 1939. After getting whooped by Missouri, they would go on to plow through Kansas, Pittsburgh (in Pennsylvania), and OU to wrap up an otherwise perfect season. But Mizzou ran (and threw) roughshod over them. NU could only manage a couple of scoring drives, and they just could not get the ball away from the Tigers.

This was a major step forward for Mizzou. Not only was it their first ever win over a ranked team (the AP had begun ranking teams in 1936), but after a few games of just getting by on offense--nine points against K-State, none against Iowa State with Christman at QB (they did put up 21 with the backup)--Mizzou was cocky and assertive against the Huskers.

After an early-season loss to Ohio State in 1939, Mizzou beat a top-10 Nebraska squad, a top-20 NYU team at Yankee Stadium, and a top-5 Oklahoma unit, 7-6, in Columbia. The miraculous, undefeated run to the Big 6 title earned Mizzou its first bowl bid since 1924 and second of all-time, an Orange Bowl matchup with Georgia Tech.

Christman was very, very good, but his impact came almost as much in his visibility as his performance. Not only did he damn near win the Heisman as a junior, but he also went on to become a solid NFL quarterback and football color commentator.

But you don't make this list simply because you were good in the booth with Curt Gowdy. You have to dominate, too. Paul Christman did that, in a way that nobody was doing that in the late-1930s.

And from the Wall of Excellence:

Christman rewrote the offensive record books so effectively that the totality of his contributions has seemingly gotten lost in the numbers and in the annals of history. In addition to his passing and rushing exploits, Christman played safety, resulting in Christman seeing the field for a ridiculous 417 of a possible 540 minutes during his junior season.

After service in the US Armed Forces in World War II, Christman's successes at Missouri helped pave the way for a five-year stint with the NFL's Chicago Cardinals and one-year denouement in Green Bay. Christman led the NFL in yards per completion in 1946 and helped form the original "Million Dollar Backfield," which led the Cardinals to the 1947 NFL Championship. 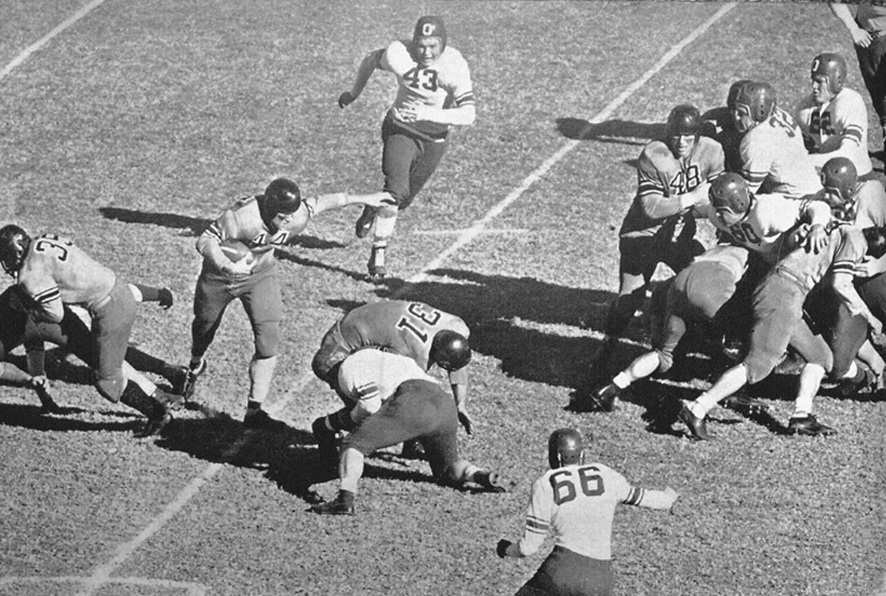