In terms of sheer catharsis, sheer monkey-off-your-back relief and joy, this one may never be beaten.

Share All sharing options for: Mizzou's Greatest, #58-57: 2003 Mizzou-Nebraska and the ZouDave video it inspired 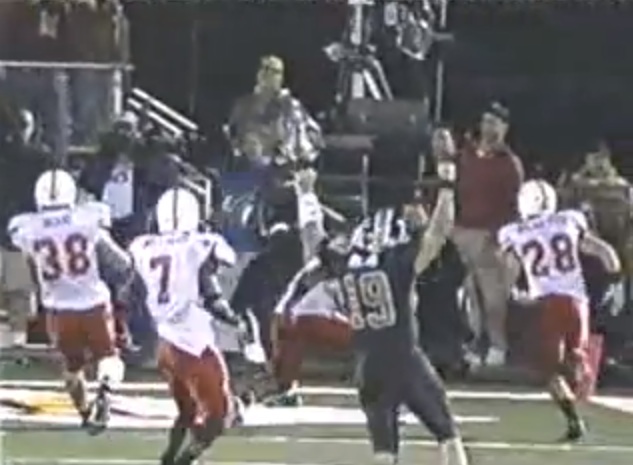 The Greatest, #77: Riccio to Sesay

As some of you have heard, I have a book coming out in the next month. (The likely release date is probably somewhere in the July 29 range now.) In the first chapter, called "It's Personal," I talk about why so many people adore the strange, often stupid game of college football, why coaches coach it, and why it continues to gain in popularity despite its countless issues.

Part of the chapter is a walkthrough of the 10 games that formed the fandom that I possess today. One of those 10 games took place in Columbia, Missouri, on October 11, 2003. (And yes, another one happened in the same stadium on November 8, 1997.) So if you don't mind, I think I will now plagiarize myself.

Revenge is sweet. In 1999, we just knew Missouri was going to get revenge for the Flea Kicker, but instead we watched Ben Davidson become immortalized. We also watched Matt Davison score another damn touchdown. In 2001, we just knew Missouri was going to get revenge, but instead we watched Eric Crouch avoid a sack in his own end zone, then race about 104 yards for a touchdown. But in 2003, it happened. In a driving rainstorm, Missouri scored 27 fourth-quarter points, turning a 10-point deficit into a laugher. With Nebraska leading, 24-21, Missouri lined up to attempt a field goal to tie the game. I couldn’t watch, so I turned my back, only to hear my friend Seth scream, "Oh they faked it!" with a cracking voice. I turned around in time to see backup quarterback Sonny Riccio’s lob falling into tight end Victor Sesay’s arms in the end zone. I watched Missouri force a three-and-out, then score again, then pick off a pass and score again.

After the game, while rushing the field along with every other Mizzou fan in attendance, I grabbed Riccio while he was doing a postgame interview and screamed, "I love you SO MUCH." His response: "Thank you?" (Riccio transferred two months later. The commonly accepted reason was that he was going to be stuck behind quarterback Brad Smith on the depth chart for the rest of his career. But I knew the real reason.) I made snow angels (plastic pellet angels) on the 50-yard line with a friend. I bought the poster.

On paper, this game was a lovely win and nothing more. Nebraska was a bit overrated at No. 10 in the country, and this win didn't exactly push Mizzou to a different level of play -- in fact, the Tigers would go just 10-12 in their next 22 games, almost getting their coach fired in the process. Perhaps that's why it doesn't rank higher. (Or perhaps I just couldn't wait any longer to talk about this one.)

But in terms of sheer catharsis, sheer monkey-off-your-back relief and joy, one could make the case for this game to rank in the top 20 on this list. For 25 years, a Herbie Husker-sized monkey resided on the backs of both Missouri fans and the Mizzou football program. In one awesome, rainy evening, with one perfect quarter, Mizzou shook that monkey off. And it felt so good.

Meanwhile, the video our ZouDave made for this is so good that it, too, earns a place on the countdown. I can't really think of the event without thinking of the video now. This is ZD's masterpiece. Behold.