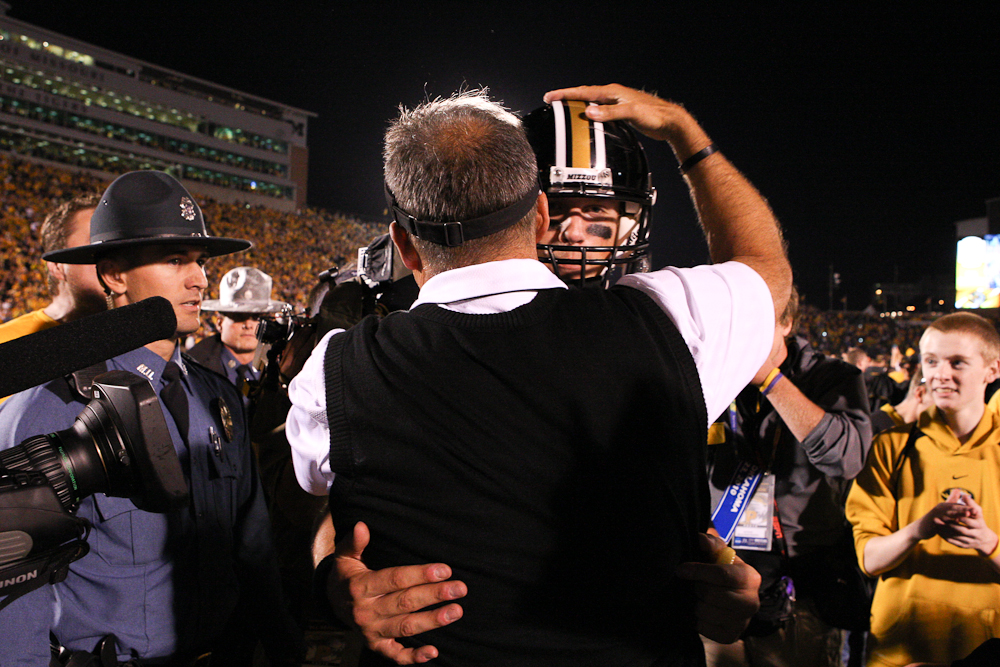 The focus of this Mizzou Greatest Post is of special importance to me. The 2010 Football season was during my freshman year at MU, and leading into my Senior year here, this was the one game, the one night, that forever secured my love and loyalty for Ol' Mizzou.

Separating these two Greatest topics is difficult. Without the importance of Homecoming, a 6-0 record, GameDay, and the lingering pain of losses in '07 & '08, Gahn McGaffie's kick return against Oklahoma is a great play in an otherwise rather average career.

Without McGaffie's return, the epic that became that night in October, never was.

Gone, the struggle, back and forth, never more than one score between the two teams until late.

And gone is the crazy, unthinkable hope that an MU team that barely escaped San Diego State, could beat not only the No. 1 ranked team, but also one that had thrice dashed the once-in-a-lifetime dreams of Mizzou fans in years past.

The buildup to kickoff the night of October 23, 2010, began weeks before. Both teams brought a perfect 6-0 record to Faurot Field. OU debuted No. 1 a week earlier in the BCS standings, while MU debuted 11th, undefeated as well, but with a miracle needed against San Diego State to stay that way. The recent history between the two teams, and the matchup of two Top 15 teams on Homecoming was too juicy for ESPN to pass up, and the weekly spectacle of College GameDay added to the 99th edition of Homecoming.

After a week of building excitement and expectations, Saturday morning arrived, and then the world was introduced to this, the most beautiful campus, and the best fans, in the nation...

The crowd Mizzou brought for GameDay was the largest in its history, a record we proudly still hold.

As night darkened the sky, the lights brightened the stadium, Faurot became the center of the college football world for a night, and one Tiger made the the very first the play of his life.

Gahn McGaffie didn't have the career either he, or we as fans, wanted him to have. Following this play, he received more applause and cheers than any other back up that I can remember. Quiet for the rest of the 2010-11 seasons and mildly productive in 2012, Gahn never scored a second touchdown in his career. But I don't, and I hope that he doesn't, think that we will forget him anytime soon for this 86-yard return; it was worth so much more than six points in a ball game.

And with that run, McGaffie's place in Mizzou lore was set, and so was the stage for an epic match between an MU team that was not only full of momentum and energy, but able to stand up and push around OU physically, in a way past teams had not been able. From unexpected interceptions by Aldon Smith and Zaviar Gooden, to magical, only-on-this-night plays like Jerrell Jackson's tackle-escaping touchdown catch and run, a young James Franklin's inspired three-yard dive, and a missed chip-shot field goal by OU, that Saturday night was as memorable and magical as a game of football can be.

As the minutes in the fourth quarter ticked off, and as the MU lead became larger, a frantic and anxious crowd began to sense that this game, this night, was about to erupt for one final time. I can remember the exact moment I knew we were going to end up with pieces of goal posts by the end of the night. It was the moment that Bob Stoops gave up, punted the ball with 2:39 left and down by nine. The Tigers had done it, forced the No. 1 team to submit, to give up before time had even expired. It was time to party!

Thanks to Gahn McGaffie, and a win of Oklahoma, October 23, 2010 was the 99th, and best, Homecoming at Mizzou