Wehrli moved almost effortlessly through a crowded backfield to defend a pass, or through a hectic open field with a football cradled under his arm, eating up ground with a long-legged stride that didn't even look fast . . . but it was.

Roger Wehrli was just another student when you saw him on campus – he was 6'0" tall and about 185 pounds, he kept his hair clean-cut (there were three styles in the late 60s: crew cut short, clean-cut around the ears but a little longer, and hippy no-cut) and he dressed in casual, but not expensive-looking clothes. He would have been called stylish in those days, like he had walked off the pages of a Montgomery Wards or Spiegels catalog.

Put him on a football field, however, and it was like he had just changed clothes in a phone booth in order to vanquish Missouri's opponents.

As normal as he looked, the truth was that he was much faster than the ordinary man. His speed was deceptive, though. He was not a water-bug runner, changing directions in all different directions almost at once like a squirrel on a highway or a rabbit in front of a beagle. Instead, he had a graceful, long-legged stride that covered ground at an seemingly effortless – but amazingly efficient – pace.

Wehrli was involved in a lot of greatests 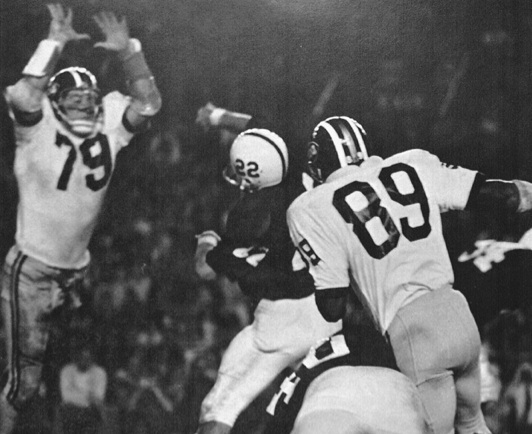 Wehrli was an offensive weapon playing on the defensive side of the ball – and returning punts. When he had the ball in an open field either from a punt or an interception, the man ran toward the end zone. It seemed as if he could read the minds of potential tacklers because, just before they would launch their bodies at him, he would make an almost imperceptible move one way or the other and leave them grasping at air or missing with an arm tackle – then he would continue to glide toward the end zone.

In 1968, Roger led the nation in punt returns, returning 40 punts for a 12-yard-per-return average. Every time the opponent punted it was a potential big-gainer for the Tigers offensively.

Roger was a football, basketball and track standout at King City High School. Coach Devine put him in the defensive backfield, and he wasn't wrong. In the same way Wehrli could anticipate the moves of a tackler, so could he also anticipate the moves of a wide receiver or ball carrier. He was a sure tackler who also excelled in intercepting passes and recovering fumbles.

In his college career the Tigers were 24-8 and finished 9th and 6th nationally in his junior and senior years. Roger was All-Big Eight both years, and Big Eight Defensive Player of the Year and consensus All-American his senior year.

After being drafted 19th in the first round, he played 14 years for the St. Louis Cardinals football team where he intercepted 40 passes, recovered 19 fumbles and ran nine punts back for touchdowns. He was voted to the All-Pro team seven years.