Again, as Missouri fans we haven't exactly witnessed many amazing final acts. Our team never peaks at just the right time. Of course. But the peaks are still pretty amazing. And Doug Smith came as close to a perfect final act (sort of) as anybody ever has.

The first thing I noticed about Doug Smith was that he was all legs and elbows. In terms of famous big men, I think Smith most resembled David Robinson with less definition; but his game was one of a kind. Out of a body full of angles and points came a game as smooth as that of any big man Mizzou has ever had. And his stats are just silly. 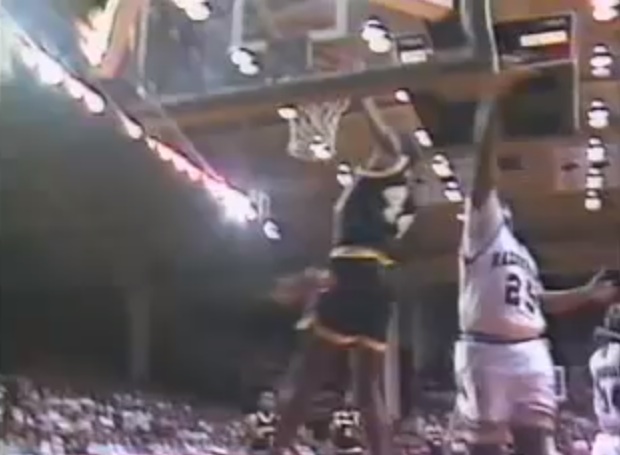 Smith's career was both incredible and tragic. Mizzou reached what may have been its all-time peak late in his junior year, but the wheels came off late thanks to some combination of injury and fatigue. And in his senior season, he posted stats almost as good as a big man can produce -- a 24 & 10 with three assists and two steals in 35 minutes a night -- on a team that, thanks to NCAA probation, had no chance of making noise in the NCAA Tournament. Still, there was a bittersweet ending: Mizzou began the season just 14-10 and 6-6 in Big 8 play in 1990-91, but the Tigers won the final six games of Smith's career, closing out the season with a win at Kansas State, two huge home wins (Colorado, Notre Dame), and a three-game sweep of the Big 8 Tournament.

Mizzou went into the Big Eight Tournament on a roll, but the Tigers’ presence irked some around the league. The tournament title came with an automatic bid to the NCAA field, but Missouri was ineligible for postseason play due to probation. If the Tigers could win, they might prevent an eligible team from advancing to the NCAA’s.

After a cakewalk in round one against Iowa State, the Tigers walked a tightrope in the semifinals.  Top-seeded Oklahoma State rallied from 16 points down to force two overtimes. But Missouri endured in a 94-92 victory, as Doug Smith played 46 minutes on his way to 29 points and 10 rebounds.

The final pitted Missouri against 13th-ranked Nebraska. Late scores by Jamal Coleman opened up a decisive lead in a 90-82 victory. Peeler posted 18 points, 11 rebounds and 8 assists, and earned a spot on the all-tournament team. But the story of the weekend – and the season – was Doug Smith, whose 31 points helped him set records for scoring in a single tournament (92 points) and in a career (207). Smith’s play reflected the urgency he felt. "I knew this would be my last chance to play with my teammates," he said, "and I didn’t want to go out with a loss."  For Norm Stewart and the program, the victory was cathartic. "To have all the things that have gone on with us this season and still do this well [is] just very, very special," said the coach. True to their character, the Tigers played best when it was personal.

Doug Smith may have grown up in Michigan, but in four scintillating years, he proved to be a true son of old Mizzou. -- Michael Atchison

Fittingly, Doug Smith went out a winner, leaving a legacy among the very best in Missouri basketball history. The conference player of the year for the second straight season, Smith left Columbia as Missouri’s all-time leading rebounder. He also stood number two in points scored, blocked shots and steals, and number eight in assists. Doug Smith may have grown up in Michigan, but in four scintillating years, he proved to be a true son of old Mizzou.

But let's rewind a bit. Before we knew of the bittersweet ending that was to follow, we only knew one thing in January and February 1990: Mizzou had the best basketball team in the country. Smith was a major reason for that, but everything was clicking. And two wins over Kansas -- a 95-87 triumph in Columbia on January 20 and a 77-71 win in Lawrence on February 13 -- proved it.

When the Kansas Jayhawks arrived in Columbia, they stood 19-0, the top-ranked team in the nation. The Tigers, 16-1, were ranked fourth. For over eight decades, Missouri and Kansas had battled in basketball. The clashes were personal, not just to the players and coaches, but to fans, students, and citizens of the states, even ones who had never set foot in Columbia or Lawrence. It was a border battle with an almost nationalistic fervor, but it was, for the most part, locally contained. It mattered very much in the Heart of America, but went largely unnoticed in the nation’s extremities.

That began to change during Norm Stewart’s tenure as coach, when college basketball became a national spectacle, as television beamed games from coast-to-coast and stitched pockets of regional interest into one enormous patchwork. What mattered most, though, was the quality of the teams. Missouri had spent two decades becoming a power program, and never before had the Tigers met Kansas when each possessed such a lofty national reputation.

On Norm Stewart’s 55th birthday, a day when second-ranked Georgetown and number three Oklahoma lost, Mizzou’s fantastic four overcame a three-point halftime deficit and thundered past Kansas, 95-87. Smith scored 23, Buntin contributed 22, and Coward added 20. But more than anyone, Anthony Peeler dominated. Despite shooting just 5 of 15 from the field, Peeler made all 14 of his free throws and finished with 24 points, 9 rebounds, 7 assists and 3 steals.  "He is so talented, it’s unbelievable," said Kansas coach Roy Williams.  Talented, but also motivated. Having grown up on the border, Peeler understood the game’s meaning. "All these Detroit guys told me that there wasn’t really a rivalry for them," he said. "I was sitting there thinking, ‘it’s a big rivalry to me.’ I didn’t want to go home and have everybody on my case, talking about how they beat us."

For the first time since 1982, and just the second time ever, Mizzou ascended to the top of the national polls, but neither the players nor Norm Stewart made much of it.  More than anything, the ranking put a bull’s eye on Missouri’s back. The Tigers dodged bullets from Rutgers and Colorado, and narrowly escaped at Iowa State as Peeler took his game into the stratosphere. He scored 42 points – making all 20 of his foul shots – and grabbed nine rebounds. But it was the last of his five assists that made the difference. With the game tied and just four seconds left, Peeler dished to Travis Ford for the game-winning jumper. Norm Stewart called the 95-93 triumph, Missouri’s 20th win of the season, "a tremendous victory for us."

The win streak reached 12 games before the Tigers had their first bad outing of the year, a 65-58 loss at Kansas State. But they got back on track two days later and buried Nebraska, 107-85, as Doug Smith scored 44 points. "I wanted the ball today," Smith said. "Everything felt right." Nebraska coach Danny Nee called Smith "probably the most mobile 6-foot-10 guy this league has ever seen."

The K-State loss knocked Missouri to number two in the polls, and allowed Kansas to regain the top spot. But the schedule gave the Tigers a chance to take it back. Missouri’s next game, at Allen Field House, provided the first number one versus number two meeting in the rivalry’s storied history.

The Tigers played their typical game – offensively efficient, defensively aggressive, indifferent to the hostile environment. They built a 10 point lead in the second half, but Kansas caught fire and tied the game with a 10-0 run. Just when Missouri seemed to be on the ropes, Anthony Peeler put back an offensive rebound to give the Tigers a two-point lead. They never trailed again. Perfect free throw shooting in the final minutes secured a 77-71 victory.  Norm Stewart called the effort a "tough, gutty performance," and Doug Smith added "it was a great win because it was in the conference, it was against Kansas and it was in their place."  Missouri basketball had never known any greater glory, certainly not in the regular season. Top of the polls, top of the conference, twice knocking Kansas from the number one ranking. Even with the investigation looming, it was a great time to be a Tiger.

Doug Smith played like a guard in the body of a lanky center. At first glance, he looked like he couldn't possibly have complete control of his body; at second glance, he was jogging back down the court after scoring on you in one of about 10 different ways. He was complete and unique, and he returned to Mizzou during one of its toughest times. He is a legend, as are the two enormous rivalry wins for which he was more than instrumental.