We've been so spoiled at Mizzou over the last decade with solid quarterbacking until last year. I was so spoiled growing up with an accomplished pastry chef as my mom. This is why Mizzou fans can act like spoiled children during one down year and why my BMI is somewhere north of 120.

Consider this the day's overflow thread.

Share All sharing options for: 2013 Mizzou Walkthrough: QBs and desserts 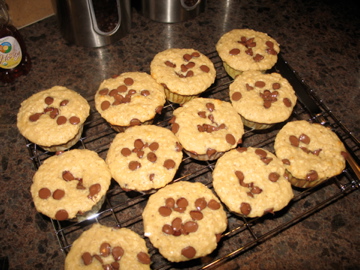 What else could James be? He is your old stand by, chocolate chip cookies. They can be oh so good, they can taste like card board, you can add nuts or toffee or all kinds of crazy things to jazz em up, or you can turn 'em into muffins. But when it comes down to it you've got a solid to great dessert that everybody likes.

(Ed. note: You've also got a dessert that people think they can top. The backup cookie is always the most popular cookie.)

Dude's got a cannon for an arm. He knows it, we know it, but his accuracy is a bit short of what a starting QB at this level really needs. Berk reminds me of cupcake cakes. Such a good idea, such a horrible outcome. It loses everything that makes a cupcake fun and is instead just a ridiculous overload of sugar and ugly decorating. Berk is an overload at times but man if he could just bring it all together....

Chocolate fountain! Who in their right mind didn't love the chocolate fountain when they first saw it? I mean for crying out loud is a fountain of flowing chocolate and you have all these awesome things that you are encouraged to just dip away in it! It was magical the first time I saw it and now when I see it again I fall in love all over again. Mauk is just this. We don't really know how good he is in anyway but he is that chocolate fountain you see as soon as you walk into the ballroom at some stupid family members wedding. HE HAS TO BE GOOD! Theres just too much to like for him not to be awesome.

He put up huge numbers in high school, like almost every QB we have on the roster currently. The Beef seems to be severely smitten with him at the moment. So, this ones for you Beef, Key Lime Pie. I have probably tried 25-30 different variations of key lime pie and they all sucked. Just the usual crappiness was kind of astounding that people actually liked that stuff. Then, I got some a few weeks ago in South Carolina, holy crap it was a revelation. That was what people had been talking about and I understand now. Printz I believe can be that one transcendent pie that stands out from the crowd and truly wows us.

This dude has style, his top gun highlight video is awesome. Hes got the freakish raw strength that you rarely hear about at the QB position, he won multiple heavyweight state wrestling championships despite being 40-50 lbs lighter than most guys he was facing. Trent to me is ice cream. Ice cream is awesome, it can be a dessert on its own right, so many flavors, so many possibilities. It can also be a perfect pairing with other desserts like cake and pie. So versatile, Hosick may end up somewhere else on the roster and be just as awesome as at the QB position.