Perhaps the depth still isn't what it should be, but Mizzou has some interesting names, new and old, at offensive tackle.

Bill C.: Four and a half years ago, Justin Britt signed with Mizzou as a run-of-the-mill two-star recruit, a local(ish) boy from Lebanon who had drawn as much attention for his wrestling as for his exploits on the football field. Now, he's the most well-seasoned player on the line, a two-year starter with 22 career starts who was lost for the season with a torn ACL in November and is already back to full speed. And he's a dad to boot.

Britt was part of a 2011 line that dominated on the ground, and it's worth pointing out that, with Elvis Fisher out against South Carolina, Jadeveon Clowney only had a good game against Missouri with Britt lined up at left tackle. Clowney had some ridiculous performances in 2012 -- 3.5 tackles for loss versus UAB, 4.5 sacks versus Clemson, a decapitation versus Michigan -- but while he had 1.5 sacks against Mizzou, he was mostly a non-factor for the rest of the game. (It was everybody else who was giving Mizzou fits in that game.) Despite shifting from right to left and back to right, his play improved over the course of 2012; after the first month of the season, in fact, I didn't have much concern for the tackle position. (The interior was a different story.)

If healthy, Britt plays at a level that far exceeds his recruiting ranking. He isn't an All-American, but I have little problem with him protecting the blind side of whichever quarterback Mizzou is playing on a given snap.

The Beef: My thoughts exactly. Beyond that, a healthy and full season from Britt may lead to greater things for this young man come April. And if that happens, it means it was very likely (conversely) that James Franklin may have also survived the year like 2011 rather than 2012.

countrycal: The odds say we won’t get hit with another disaster like last year, so I am looking for most if not all of our OL to return to form and produce like the line has the past few years. Britt has the second most important job – protecting the quarterback’s back side. I really look for this young man to kick butt on some of the big names of the SEC. He’s big enough, he’s tough enough, and I can’t help but believe he has plenty of motivation.

Bill C.: Mitch Morse was an average center in 2012, struggling mightily with consistent snapping, especially at the beginning of the season. But while he, too, missed some time with injury, his late-season move to tackle worked out pretty well. Evan Boehm has taken the center job, so the athletic Morse can focus on his better position. He probably wasn't quite as successful as Britt at tackle, but he was also less experienced. Again, neither Britt nor Morse are All-Americans, or even potential all-conference performers, but they are more than serviceable.

The Beef: A year ahead of Chappell and someone who saw a good amount of time on the field last year among the injuries, you hope Morse is one of many who end up benefitting from the time they got last year, however unexpected it might have been.

countrycal: If Mitch beats Chappell out, then we are really looking at some awesome depth. Bring it on.

Bill C.: Anthony Gatti was getting hurt before it was cool to get hurt.

The Beef: Gatti may finally be healthy and ready to contribute to the team as the backup left tackle. I will say the time may be now for him, as he will be looked to replace Britt next season, but MU is bringing in a LOT of OL in our past and current classes. I’d love to see Gatti be in the mix all season as one in the rotation.

Bill C.: Actually, one more thing about Gatti, and I think I mention this every year: The dude passes the eyeball test. And he still almost looks skinny at 315.

The Beef: Chappell was someone who was believed to be in the mix to play quite a bit last year before getting hurt in two-a-days this time a year ago. Since then, he has come back to find himself behind Mitch Morse at the RT spot. If he can get back to where we thought he would be last year, chalk him up as another in the rotation.

Bill C.: We were indeed hearing quite a few good things about Mr. Chappell. It will be interesting to see who gets more playing time in 2013 -- Chappell or Gatti -- and what that could mean for the battle to replace Britt next spring.

countrycal: We could have used him last year; we will definitely use him this year. Another big, talented sophomore. The trenches are looking particularly stout for the next few years. 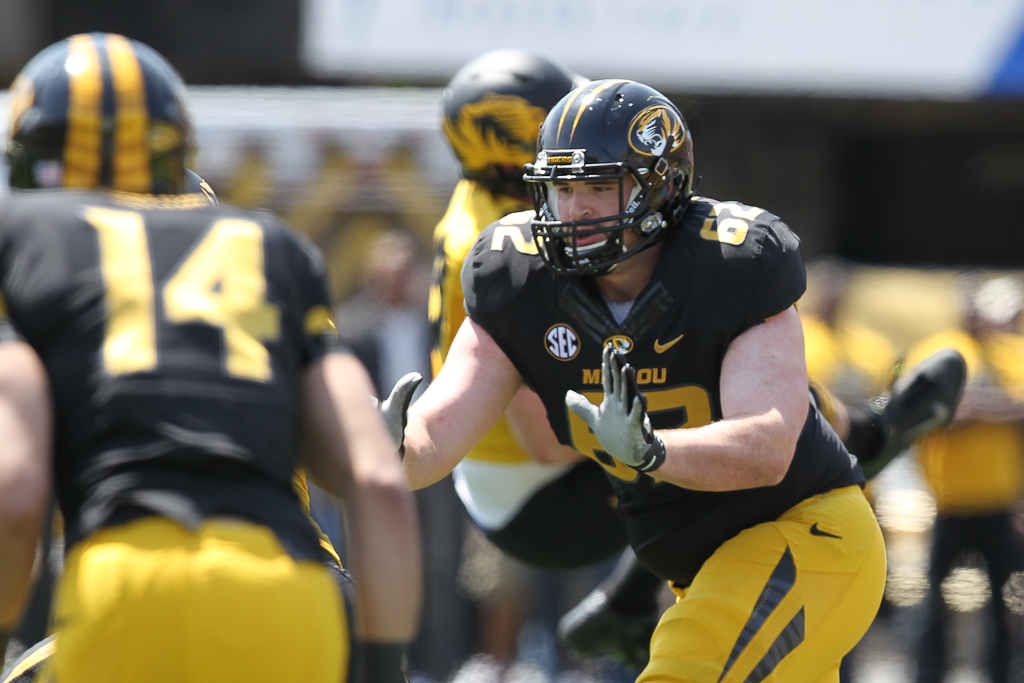 The Beef: Every time I see Gilmer, I think of Varsity Blues and Gilroy. That is all I have to offer on Boddie, who I do not think is likely to see much time at all this year.

The Beef: If there is someone from the incoming class who might see some time, my money would be on Rhodes. A BEAST, he may be the closest to being physically able to play this coming year. But I think the future is very bright for this young man.

Bill C.: The coaches agree with that last part.

"Clay is going to be a really good player," Walker said. "He’s athletic, he’s big, he’s long, he’s got pretty good feet. He’s got to learn that he can use his hands to stop people and not lean on people with his face. That’s the number one thing...all high school linemen do that."

Walker, however, said it's still too early to say whether Rhodes, a three-star prospect according to Rivals, will actually redshirt or not, though Missouri coach Gary Pinkel recently said every freshman offensive lineman will likely need a redshirt year to get stronger.

2013 Mizzou Walkthrough: The offensive line looks for a bounce back