Thanks to injuries, Mizzou had neither experience nor depth in the middle of the line last year. It has both this year, but is there enough pure talent to lead to offensive improvement?

Bill C.: There are a million obvious reasons to hope Missouri is really good this year. One of the less obvious reasons: The better Mizzou is, the more people will discover Max Copeland.

Max Copeland has personality to fill an entire two-deep, he has the perfect lineman attitude, and in 2013, he has more heft, too. The only question with Copeland is simple: How much talent does he have? It's great to have as many max-effort guys as possible setting the tone for the rest of the team, but the simple fact is that Mizzou wasn't good enough at actually blocking last year, and while the tackles struggled mightily in September, the interior of Mizzou's line really never did. While Nassib-to-Lemon was a big reason why Mizzou lost to Syracuse, so was Syracuse's ability to slice into the backfield in multiple short-yardage situations. (Same with Vanderbilt.) Quick lines devastated the Mizzou line, and while some good ones (Arizona State, Syracuse, and, it goes without saying, Alabama) are off the schedule, obviously you're going to be limited if you don't trust the line to do its job. Copeland is the incumbent and never saw his starting job seriously threatened in the spring. Here's to hoping that's because of how much he's improved, not because of how much his backups haven't.

MizzouRugby: Rock’n’Roll and don’t get hurt.

The Beef: Another person, similar to Matt White, though slightly less vilified because he walked on, has an impressive personality and is from Montana. At the same time, a number of Mizzou fans are somewhat bothered he currently exists as the starting left guard. Keep on rocking, Max ... keep on rocking.

countrycal: They say Max is up to 305 or more now. I am perfectly happy having him as a starter. Last year caught the kid by surprise – this year has not, and I see him opening some eyes as he comes in prepared to rock and roll.

The Beef: One starting guard from Montana, the other from North Dakota. Strange things are afoot at the Circle K. McGovern, if I recall correctly, was some sort of weight lifting champion coming out of high school. Starting as a sophomore is a very solid and exciting thing to have happen if he is truly ready for the test.

countrycal: Starting as a sophomore, with good talent behind him. This line is looking better and better as we go down the line.

Bill C.: There's no question that the line needed both health and some new blood. In late(ish) bloomer McGovern, the Tigers are getting the latter. McGovern wasn't a very big part of the rotation last year, but things clicked for him this spring. His emergence at right guard allowed for Mizzou to keep Evan Boehm at center permanently. Again, here's to hoping that's because of how good McGovern has become, and not a less appealing alternative.

Bill C.: Brad McNulty didn't get much mention during spring ball last year. That he started for nearly half the season tells you what you need to know about the health of the guys in front of him. But McNulty is the perfect example of the "Injuries hurt in the present tense and help in the future tense" truism. In McNulty, Mizzou now has an experienced, toughened-up backup guard and center. And when players above him graduate, Mizzou will have an even more experienced, even more toughened-up veteran to serve as a major contributor/starter. That McNulty couldn't land a starting job this spring tells us immediately that the depth has improved as compared to eight to 12 months ago.

The Beef: McNulty currently reads as the backup center. However, I imagine we see McNulty on the field at one of the guard positions at different times this year, as I would hope we go about trying to come up with a solid rotation of 7-8 guys who stay healthy for the better part, or all of, the year.

countrycal: Brad is experienced insurance for any of the three middle spots when they need a breather or should have to deal with an injury. 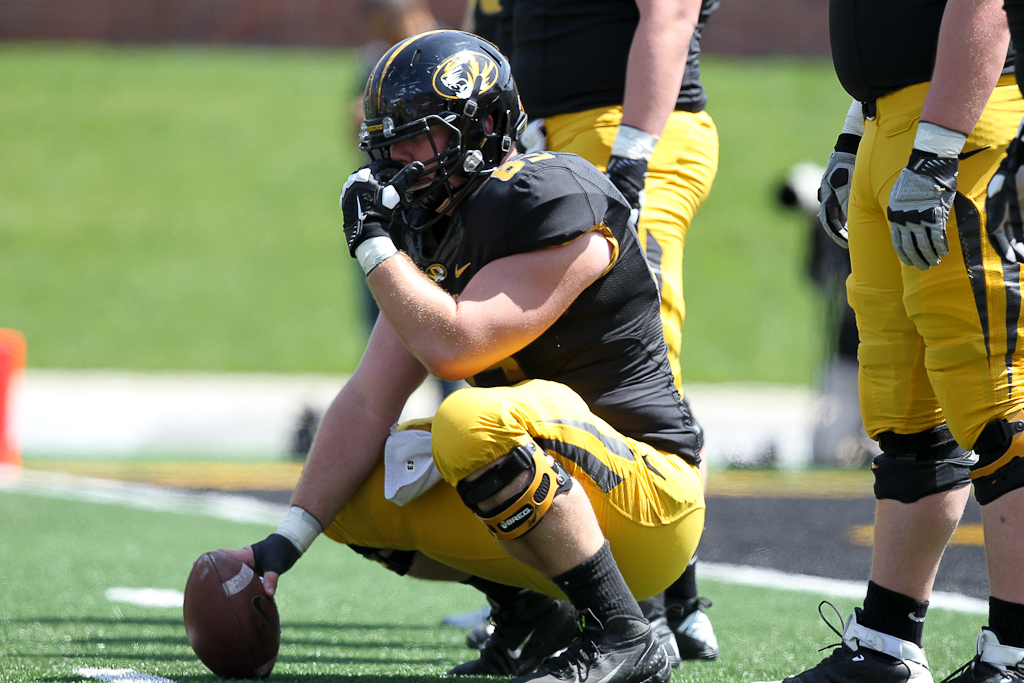 The Beef: I still remember seeing this kid at the end of his sophomore year in high school at Timberland. He was a monster then, but he never quite rounded into the form most Mizzou recruiting fans thought he would be. At this point, he is behind McGovern at RG. If he sees meaningful minutes this year, that is either a good thing (because he would have finally taken the next step) or a bad thing (injuries have come back to haunt us yet against).

countrycal: The kid still has potential, but last year may have been when it should have come forward. He may get hid on this line if it stays healthy.

Bill C.: I don't want to get my expectations too high regarding Hall, who was struggling to crack the two-deep on what seemed like a pretty iffy line at Ole Miss not too long ago. But his presence assures us, again, that depth is better than it once was. And the dude's got SEC size, that's for sure.

The Beef: The heaviest of the heavies on the line, Hall has spent his year on the sideline and now is 2nd in line behind Copeland. Is there a battle ready to wage between this Hall and Copeland?

countrycal: That is one big body. There is a lot of experience ahead of him to overcome, but you’ve got to like the bulk he brings to the table.

Bill C.: Recruiting rankings are powerful things. Because of Nick Demien's four-star rating, we continue to list him pretty high when we're doing walkthroughs and whatnot; but for most of the last year or so, another player has been either even with or ahead of Demien (and others) on the two-deep: junior walk-on Stephen Carberry. It's hard to know which walk-ons to mention or not mention, but if you spend a decent portion of the time on the second string (and Carberry opened fall camp as No. 2 left guard), we should probably mention you.

Carberry's a big boy. That much we know. We're used to walk-ons being a bit undersized (6'2, 280, something like that), but that doesn't apply here. He's got a couple of inches on Max Copeland (who was indeed in that 6'3, 280 range last year); and while pure brute strength became an issue last year when injuries wreaked havoc -- Evan Boehm was still a true freshman putting on good weight, and both Copeland and Brad McNulty were at least a little bit lacking in the strength category -- Carberry can help to assure Mizzou doesn't go down that road this year, even if there is more shuffling in the middle.

And he has Josh Henson's blessing. That's something.

"Honestly, after that scrimmage there were a couple of guys who I said, ‘They could play for us if we need them to,’" Henson said. "Before that scrimmage I was not saying that in my mind. You never know when that’ll start clicking for them."

The Beef: I could not have said it any better myself when Bill mentioned the pre-conceived notions I had about the relative size of Carberry.  When Bill mentioned him to me the other day, I figured he would be 6'2 or 6'3 and about 285.  6'5. 300?!?!  Well damn.  Impressive to me to see the size on the inside of the line here.  I will be excited to see Carberry get some snaps here and there, even if the here and there is only in the home opener.  But as we know all too well from last year, we can never seem to have enough insurance policies kicking around, and Carberry clearly appears to merit consideration as one.

The Beef: MUTigers.com now has Williams at 6’3 and 295, so that is not bad to see. As a third stringer coming off his RS season, I do not believe his is a name we will hear much from as the year goes on.

Bill C.: Williams needed to pack on a decent amount of weight, and now he's done so. The Beef's right: If we hear his name in 2013, that might be a sign that a lot of bad things have happened. But he still has plenty of developmental time ahead of him.

The Beef: I recall hearing or reading Abeln was a volleyball player at SLU High while also playing football. I also remember hearing they liked him at center, but this may have been before Boehm moved over. If center is still the case, Abeln will have some time to come before he potentially sees the field.

Bill C.: Abeln was one of the first commits of the 2013 recruiting class. I think the best-case scenario is that, by this time next year, his development at center is making coaches wonder about moving Boehm back to guard. That's quite a bit to ask, of course, and after a redshirt year, Abeln could still serve as a quality backup center for a year or two before taking over for Boehm. Regardless, it's nice actually having freshmen to redshirt. Recruiting on the line has been less-than-successful of late, so it would be lovely if both Abeln and Clay Rhodes were able to provide quality pretty quickly.

2013 Mizzou Walkthrough: The offensive line looks for a bounce back