Frank Graham pitched for Big 6 Champion Mizzou teams in the 1940s and remained a faithful Tiger Baseball fan throughout the years of the Big 7, Big 8, Big 12, and SEC.

Frank Graham passed away Friday at the age of 93.

Graham was a familiar face at Taylor Stadium for the past several years. As a long-time season ticket holder, he could frequently be seen in Section C, Row 5, Seat 1, cheering on his Tigers. In the last few seasons, I saw him fewer times as his age and the Simmons Field weather increasingly were at odds.

The last time I saw him at Simmons field was during the final Big 12 season in 2012. I was fortunate enough to talk to him, and to take a quick photo of him standing next to the bust of his former coach, John "Hi" Simmons. 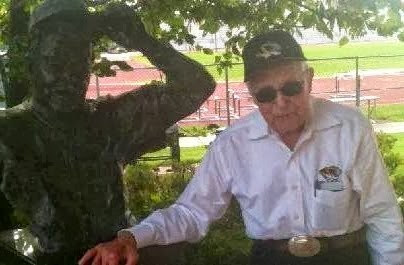 He was always good for a few stories about Mizzou Baseball in the old days, including tales of John "Hi" Simmons, who had only been on the job for a couple of years prior to Graham's arrival.

Throwing out the first pitch before Saturday's game will be Frank Graham. A native of Fair Grove, Mo., Graham was a senior on the 1942 team. He pitched 31 innings in five games for the Tigers, compiling a 2-2 record. On April 24, 1942, Graham shut out Washington University (Mo.) as the Tigers cruised to a 10-0 win.

In 100 Ages, a feature earlier this year, the Columbia Missourian presented an audio clip of Graham talking about his years as a ballplayer.

"I thought I was an old man when I got out of the service. Twenty-six. I'd lost about four years of good time for baseball to find out if I could make it (as a professional)." Columbia Missourian

But Frank Graham was more well known in the state of Missouri for other achievements. He was the long-time director of the 4-H club in Missouri, and was a Boone County Judge (now known as Commissioners) in the '80s and '90s.

He will be missed at Simmons Field. A tip of the cap to you, Mr. Graham.

Sad to hear of the passing of former Tiger great Frank Graham. He pitched for us in 1941, 42. Great baseball guy. Rest in Peace.