I really wish we had done this last year so we could compare Henson's grades with David Yost.

Excellent game plan. Knew when to have the offense speed up or slow down and lost no effictiveness either way. Put the O in the best position to succeed

From what we've seen (and I don't think its much), couldn't be happier with the scheme and execution. The only thing I found problematic was the goal-line rush attempt. I believe QB was under center and run was some kind of dive. Play was totally blown up by an undersized D-line. Let's not do that again. K?

Hard to grade him higher than 6 due to the level of competition. I have a feeling he could have called most anything and it would have worked.

I really liked how Henson attacked weakness when he found it.

If something worked, he actually tried it again.

impossible to answer, we have zero reference/history to judge against.

It's hard to tell what grade to give against the likes of Murray State. I'm quite sure that there was a lot of stuff left in the bag. On a positive, I liked that there were multiple players involved in the offense.

Loved the balance in playcalling. Loved the way the run game flourished. Also loved the way went for the deep ball to DGB to "spark" offense when Murray State was up a TD.

Loved the play calling, no empty back fields was nice

Murray's defense should not have given us problems, but the difficulties may have been due to a vanilla play book.

Nice mix in the play calling. Good clock management to get 3 pts before the first half ended.

Nice use of TEs

Obviously conservative in his first game out and not showing too much. Liked seeing the TE lined up tight.

Really liked what I saw from Henson. Kept it simple, obviously, but also used all the weapons he has in the correct way.

screen passes. Seriously? i know we have big receivers, but Yost is gone...

Spreading the ball around and establishing the run!

This game wasn't an accurate test

Wonderful play calls. No turnovers, although it's really not on him

Wondering why there weren't more runs inside the red zone early

Again, it would have been fun to compare James Franklin's 2012 grades to his first 2013 grade.

About as solid as ever

Can't ask for too much more from him.

Can't imagine Franklin looking a lot better than he did. It's a shame he lost last year to injuries

Franklin his definitely healthy. His passes are stronger and more accurate than 2012 and most of 2011.

Franklin looked much more comfortable than he did for all of 2012. Had great zip on the ball.

Franklin seemed poised and confident. The most anyone could ask game one of the season.

He did not get real snaps

I know it's an FCS team, but 300 yards and 3 touchdowns is already a step up from last year. I believe Maty only threw once, and it wasn't the smartest desicion... Got the completion, though.

improved accuracy, yet was saved by the amazing reach of the receiving corps

James looked healthy and as good as ever. He's gotta do it more to prove himself, but if he can stay healthy I think he'll be great.

JF: Excellent Game from him and seem not only health but extremely comfortable. Maty: Showed zip on the ball wasn't asked to do all that much so don't really feel like giving him a grade.

keep high passes DOWN! SEC defenders will break our receivers.

Looked like a man on a mission. Helped that calls seemed to play to his strengths

Looked like we could be seeing a return to 2011 form or better for Franklin, didn't see much of Mauk other than an ability to not screw up handing the ball off

only one truly bad throw

Only thing keeping the grade down is the quality of the opponent.

People are saying he looked like his "old self" or his "2011 self". I disagree. He looked better. More poised. More fluid. Better decisions. Looking forward to more of that.

See comments about Henson...while I do think that the ceiling is quite a bit lower than past MU QBs, I think Franklin will have a solid year...and as we painfully saw last year, as James goes...the Tigers go...

What more could he have reasonably done...short of rubbing his fingers to simulate the payoff? 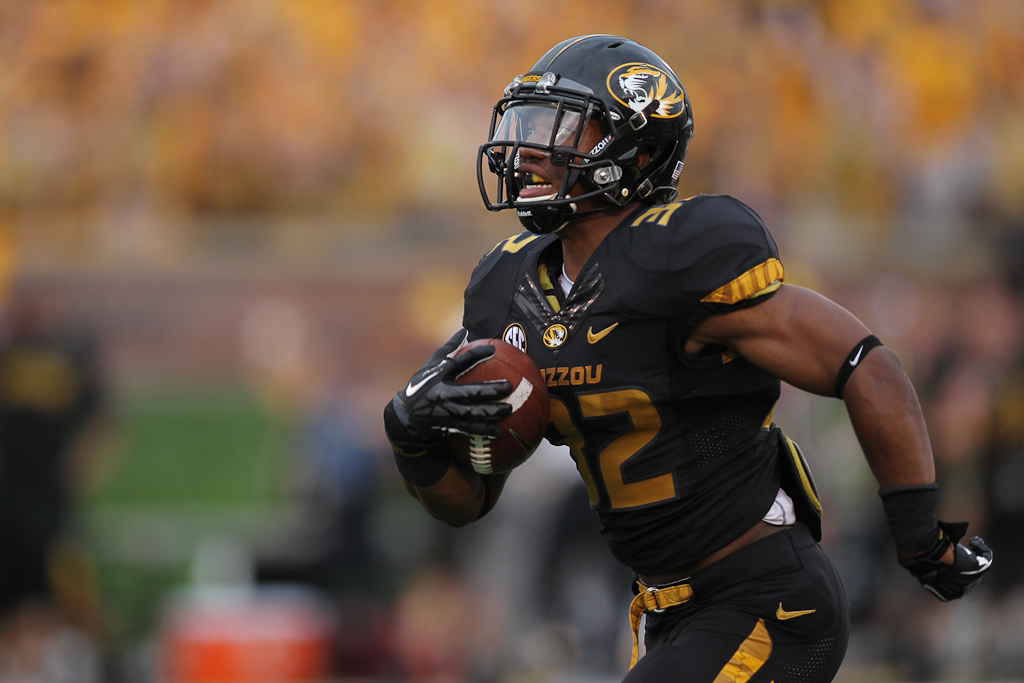 Henry Josey with something less than a 9.00? You people are heartless.

add steward to the list and wow we have an awesome stable of talent !

All the RB's showed speed and quickly hit the open holes to get down field. If it holds this in an amazing 1-2-3 punch

As much as everyone enjoyed the Josey comeback (deservedly so), the real story has to be the emergence of Hansbrough. He looked decisive and quick in hitting holes and, for his size, seemed to take the hit to the defense and not the other way around.

Could be a special group this season. Loved that you didn't see a dropoff with substitutions

Even if he never takes the field again, it was outstanding to see Josey back.

Hansbrough seemed like a beast. Josey had the emotional scamper over 50. The RBs attacked downhill. Loved that they didn't spend time dancing behind the line.

Henry Josey. That's all I have to say.

Henry's back! 68 yards for the long TD. Russ showed good moves and lots of speed. Murph's value as a PR/KR didn't exactly show, but he did get a TD on the ground.

I could have gained 5 yes on that defense!

I've been wondering if I was just over-enthusiastic/hopeful about our stable of RB's through the spring and summer, but I think Saturday's game (albeit against an FCS team) that we have something special going on in the back field this year.

Josey is back! Hansbrough is progressing quite nicely.

Murphy had few attempts to return. Josey had a target on his back, but waz great. Hansbrough, lookings like a grest #2. much stronger than last year.

RH was the best this week.

This is a crazy explosive group. The fact that Murph may not get many touches says something about the two in front of him.

This is a talented group that could give a lot of SEC defenses fits.

Drop a pass or fumble? Your score's below 6.

7 players went for over 10 yards a catch and Marcus Lucas looked not only like his old self but maybe even better. DGB showed more of that specail something and just a complete wow from this group. Pat Washington. You. Are. Amazing. So happy you are a member of this staff.

All Jimmy Hunt does is catch touchdowns

another stable of talent with plenty of growth still to do.

DGB looks like he takes some plays off. He needs to run every route like it is coming to him.

Great day for these guys. They're finally starting to live up to the hype.

Impressed by the new guys, DGB looked good(except for lack of TD), ML and LW could have been better at times

It's hard to look at this group as a whole. We picked on the corner lined up with DGB early and often. Good looking so far. Except for Bud Sasser's fumble.

Limit the drops and dont give up on plays.

Loving the depth at WR and it showed on Saturday.

Pretty much caught every catchable ball and then some.

Sasser annoyed me, the rest wowed me

They looked like the deepest and most talented unit on the team.... as they should.

What an athletic group of WRs. The best two grabs came in the same series, where DGB snagged a ball one handed, but came down OB and Lucas did the same on a slant across the middle.

WR's look to live up to the hype this year. DGB's out of bounds one-handed catch was beyond sick. Hope to see more of those in bounds this season. I did deduct a point from DGB for the strange cut into the Safety to get tackled instead of keeping north and south to get the TD. Lucas had an awesome grab. Everyone was involved. Mizzou spread football at its best.

Both valuable blockers that also showed value as receivers with YAC.

Didn't see a heavy dose of TE play, as the Tigers opted for quite a few 4 WR looks.

Didn't see too much of these two, but they looked good in what I saw. E-Dub recovered nicely from a weird hit and later banged it up field for a nice gain. Culkin looked in sync with JF on the nifty shovel pass for a 1st down.

Great blocking. Digging Culkin lining up at h back and his amazing Jesus-doo

I didn't see much explosion out of the TE slot, but I'm okay with that, I'm more excited to see them blocking for once

I think we'll see more of these two later in the season. I think Henson is not showing all his cards yet.

Looked good but didn't see much from them. More to see next week perhaps?

loved seeing a TE with his knuckles in the dirt

Never really heard their names called much, but I loved seeing the different ways they were used.

What? No area for comments about Fullbacks? 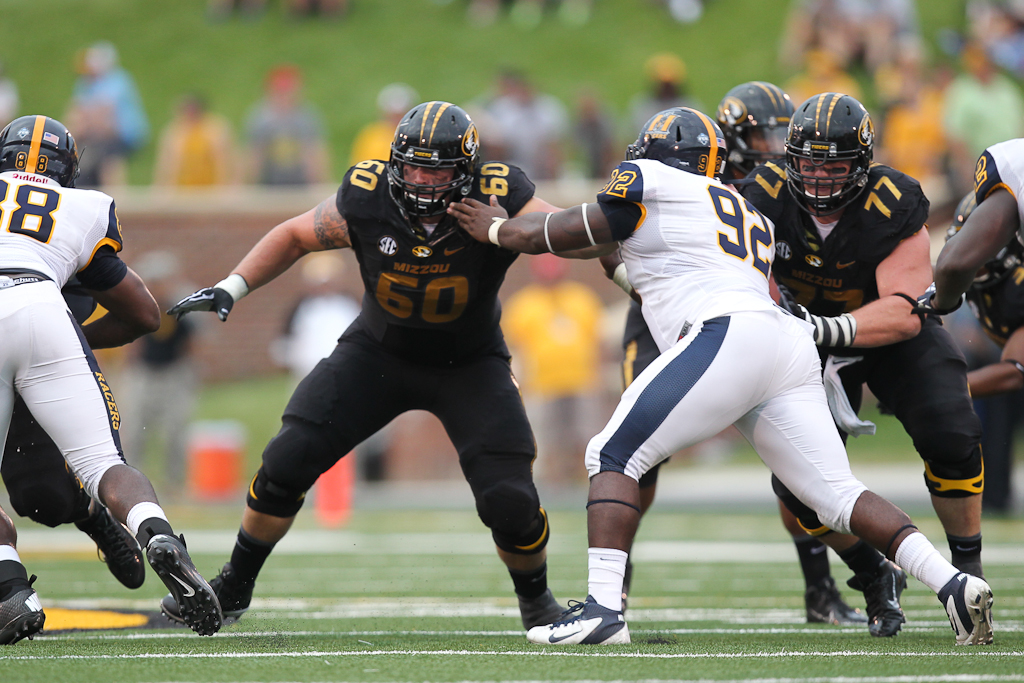 1 bad snap and at least solid pass protection and run blocking. I'll take that anyday. No one obviously stood out as bad this game

All good all the time.

Decent day for these guys.

don't really recall hearing their names called, which is high praise for an O-Line

Good snaps (Barring one low snap). The right side collapsed a bit, noticeably, when Mauk was hurried. Nothing a remember other than that.

Line is healthy...Franklin stayed upright for the most part and came out of the game healthy...nuff said...

Looked good for the most part, but I'll reserve judgement for a tough opponent

never noticed them, which is a good thing

Nice holes for the backs to run through. Franklin had lots of pocket time.

Not noticing anything is usually a good thing

one bad snap. Our next stud center has arrived.

Snaps where mostly good and provided good protection for Franklin

wow we have a complete OL for a whole game! more please!

Yeah, Yeah. I know it's only an FCS team, but still, they look night and day better than last year already. Hopefully something is coming together with this cast of characters right now.