Wednesday Watercooler loves the nickname for Mizzou's win over South Carolina but is a bit concerned about what's going on with the Mizzou basketball program.

"The Comeback in Carolina" has a pretty nice ring to it.

The full game, this time without sound, so you can watch at work, or while listening to music and sipping wine

Mizzou Announced that Cameron Biedscheid has left the Missouri basketball program opening up a scholarship for 2015.

"Cameron will no longer be a member of our basketball program as he attends to personal matters," Coach Kim Anderson said in a statement Tuesday evening. "We wish him and his family all the best and hope everyone will respect their privacy during this period of time."

Dan Biedscheid, the player’s father, declined to comment when reached Tuesday, saying only that Biedscheid has no future plans yet. The 6-7 guard was expected to provide perimeter scoring as part of Mizzou's rebuilt roster this season. 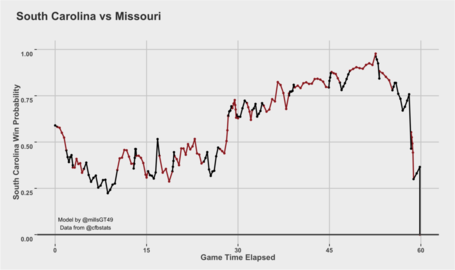 Mizzou's 21-20 comeback win at South Carolina tied for the biggest fourth-quarter comeback in school history. But it wasn't the only noteworthy comeback of the Gary Pinkel era.

The first 36 pass attempts of Maty Mauk's night in Columbia, S.C., gained an average of 1.2 yards. Without two injured starting receivers, Missouri's quarterback started the game 3-for-4 for 33 yards and three completions to lone remaining starter Bud Sasser. Then he went 6-for-25 for 29 yards and two sacks for a loss of 26. That's 31 attempts, 36 yards.

* We’ve seen games this year already when quarterback Maty Mauk has extended plays with his feet and completed passes on the run. This was not one of those games. Here’s a breakdown of Mauk’s passing when he rolled out of the pocket or was flushed out by pressure vs. his production in the pocket: Flushed/rolled right: 0 for 6; 0.0 rating Flushed/rolled left: 1 for 4 for 3 yards; 31.3 rating From the pocket: 11 of 24 for 129 yards; 91.0 rating

Mizzou in the NFL: Sheldon being Sheldon : Dave Matter

He made bigger headlines after the game when asked about his quarterback. With second-year QB Geno Smith struggling, Jets fans chanted for backup Michael Vick.

Richardson’s message for the fans? "Shut up," he told reporters. "If that's the case, produce a child to make it to the NFL and then let's see what he got. Other than that, just shut up."

"That’s just the way the NFL works,’’ Josey said last week in a phone interview from Jacksonville. "The Eagles are a team with some outstanding backs and I tried to learn as much as I could from them during training camp. I was a little surprised (about being cut and not added to their practice squad). But at the end of the day, you can’t be upset. You just keep moving forward, learn from the experience and try to prepare yourself to make the most of the next opportunity.

Alden, on if the Georgia game is sold out: "It will. There's no doubt."

Had a great time watching this historic game with @TylerBoehm10 what a game #BlueOctober pic.twitter.com/rtPMwCbSHa