A new era of Missouri basketball is about to kick off, complete with a reconnection to Mizzou's past with the hiring of one of our very own.

Kim Anderson was born and raised in Missouri. He attended High School in Sedalia, Missouri, a small town located somewhere in the middle of the state with a population of about 20,000 people. In a town like that, things don't change a whole lot over the years(they still host the Missouri State Fair every summer, as they've done since 1901). He then committed to play basketball for Norm Stewart at Mizzou, and had a productive career at Missouri. He is still ranked in the top 20 in scoring and rebounding in school history. He was the 1977 Big 8 Player of the Year, has been inducted into the Mizzou Sports Hall of Fame, and perhaps his most crowning achievement to date, he was ranked #85 on "The Greatest" list here at RockMNation. He graduated with a Bachelors Degree in 1979, then later a Masters from the University of Missouri.

At Smith-Cotton High School, the high school where Kim Anderson played, the mascot is the Tiger. So not only is he a True Son, but in a way Anderson has always been a Tiger. He had a brief hiatus where he was a Bear during his time at Baylor, then he was a Mule while he coached at Central Missouri. In his heart, it was always the Black & Gold of the Missouri Tigers.

Check out the Xs & Os of Kim Anderson's Offense:

Anderson also spent time in the NBA as a player for the Portland Trailblazers. He honed his craft as a coach under Gene Iba at Baylor, then under his old coach Stewart at Missouri. He has been passed over multiple times for the position of Head Coach at Missouri, but he kept plugging away at Central. There has been a lot of cyberspace on RockMNation devoted to Coach Anderson, both before and since he was hired as coach. So coming up with something new to say hasn't been the easiest job. The truth is that Kim Anderson is so ingrained in Mizzou culture, it's nearly impossible to say something new about him. With the three assistant coaches, there is some shroud of mystery, a sense of the unknown. With Coach Anderson, he is very much known. He is a True Son.

We know about his playing career, we know about coaching career both as an assistant and head coach. When it comes to Coach Anderson, at this point there is very little that we don't know. 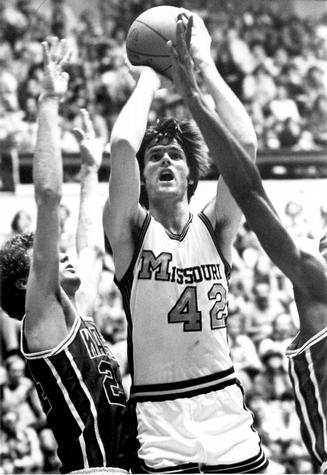 Kim Anderson goes up for a jumpshot in his playing days. Give the hair a break, it was the 70s.

What isn't known is what he'll do with the job. There are questions, and legitimate ones, about this hiring. So far he's done the job of uniting the fan base. People seem to be galvanized about the basketball program for the first time in a long time. It's exciting, and we're close. We are just days away from the first chapter and opening salvo of the Kim Anderson era.

It's a good idea at this point to reset a bit. For many of us that have followed the offseason closely, it's easy to be excited about basketball starting up. There have been many successes so far. Smart staffing decisions and recruiting wins have been in the headlines. We've seen a couple misses, but not many. So it's easy to get lost in the success of the offseason, since the hiring of Kim Anderson, and forget that there is a long road to go. The reason Frank Haith bailed is he didn't think he could win much this year, and wanted the security of the long term deal in Tulsa. So the question turns to one of how much Mizzou can expect to win this year?

So a reality check time... There are currently 11 players on scholarship, 5 freshmen, 2 sophomores and 4 upper classmen. 7 of those players have not seen a single SEC minute, and the leading returning scorer from a year ago averaged less than 6 points a game. There are 7 players who were 4-star recruits, so the roster has talent, 3 are freshmen, 2 are sophomores, the other two haven't come close to showing that level of talent at the college level. There is no clear leadership at this point, and the player many believe to be the best on the roster hasn't played in weeks because of some minor knee issues. With 7 underclassmen, 4 upperclassmen, and virtually no scoring coming back, it's easy to see why many might be skeptical about Mizzou's upcoming season. And if this season is a rocky one, how does that impact the positive recruiting gains the Tigers have made with 2015 players and 2016 players. You're hoping to get fall commitments from guys like Jayson Tatum, Thon Maker, Miles Bridges and Kobi Simmons and it's difficult to do that if you're coming off a .500 season, regardless of how well the young talent looked and regardless of how well you sold the vision of the program for the year before that. Mizzou needs a good season this season to positively impact the recruiting of the 2016s.

There are far more questions about this team than answers. Included amongst those questions is the fact that this is a first year Division 1 head coach. Yes he is ours, yes he is a True Son, yes many of us believe in Kim. None of that is going to matter when the ball is tipped November 14th. It won't matter when this young Tiger team heads to Hawaii and takes on Arizona, and it won't matter when they try to win road games in the SEC in places like Fayetteville, Lexington and Athens.

The homecoming celebration is about to wrap up. It's time for the work to be done. We'll find out if Kim Anderson, True Son, is up to the task of leading Missouri basketball into it's next great chapter.