In Monday's Media Day press conference, Gary Pinkel asked for better facilities for the coaches and the athletes. I agree, but I want to go one step further.

"The next thing we have to do -- and we have to do it fast, OK? We have to do it in the next few years -- we have to build a facility down there in the south that wraps around there," Pinkel said. "And it’ll have football offices, weight room, new locker room. Our offices are nice but, compared to everybody else in the league, they’re just average. We don’t want to be average at anything. We need to build that down there at the south end, and we don’t need to wait six to eight years to get it done.

Mizzou just finished an expensive $46.5 million expansion putting suites and an upper deck on the East Side of the Memorial Stadium. While the expansion didn't do much for actual seating capacity, improving it from 71,004 to 71,168, it created an additional revenue stream via those premium suites.

Mike Alden and the University of Missouri appear to have made a considerable effort to make Mizzou athletics and Mizzou football's gameday experience attractive to high-rolling people in Missouri. More power to them. The University goes to great lengths to operate in the black and part of that is luring donors to the program who can help bankroll further renovations.

MU could eventually move all of its football operations — offices, meeting rooms, locker room — across Providence Road and house them in a new structure attached to the south side of the stadium with offices overlooking the field. 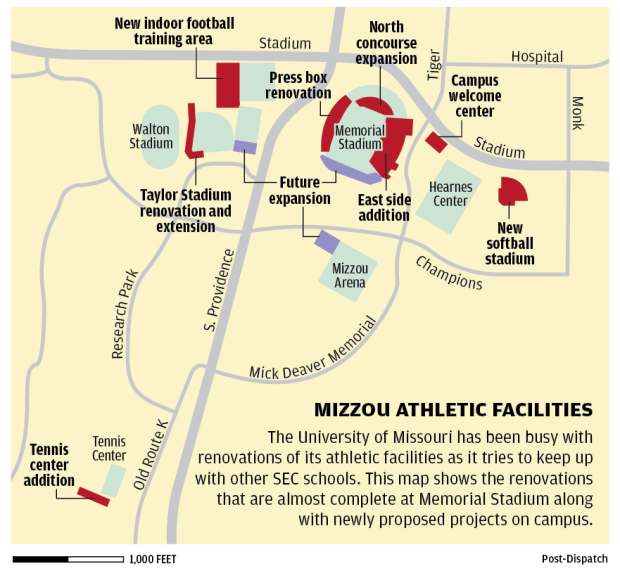 And again in July in the article Mizzou keeps pace with SEC arms race:

Down the road, Mizzou has discussed building an all-encompassing football complex just south of the stadium to house all offices, locker rooms and meeting rooms.

But back to Morrison's article, athletic director Mike Alden addressed the issue of the south side a while back, though he was speaking about stands more than offices.

At that time, Athletic Director Mike Alden said south end-zone expansion would proceed if there was demand for it. While Alden spoke in terms of ticket sales, Pinkel did not reference expanded capacity Monday.

"That’s a piece we are excited about, but we’ll have that out there at a point where we’re really consistently filling, on a regular basis, Faurot. Then you want to be taking a look at that," Alden said in June. "A lot of times, people get caught up in the size of it. We’ve seen some schools maybe overbuild. And so what we want to make sure that we’re doing is we’re making sure that we’re doing a great job with our quality and the size. Once we can pack that on a regular basis, then that next step will be done to go down at the south end."

Via NCAA.org statistics, going back to 2005 here is Mizzou's attendance averages per year:

Mizzou's biggest bump in attendance came on the heels of the move to the SEC, in part because of increased visiting fan numbers from schools that hadn't been to Faurot Field. The subsequent year's drop came after a particularly difficult campaign plagued by injuries. Looking further back, even after some of Mizzou's best seasons, attendance couldn't reach peak capacity. "Consistently filling, on a regular basis" 71,168 seats at Faurot Field is going to take many more years of sustained success, potentially beyond Gary Pinkel's current contract.

I feel that I need to reinforce that Pinkel is asking for improved facilities rather than stadium expansion. Because he talks about building a facility that wraps around the south end zone, it may sound like he's asking for the south stands to be renovated but I think he's looking for something more along what Arkansas has at Donald W. Reynolds Razorback Stadium. 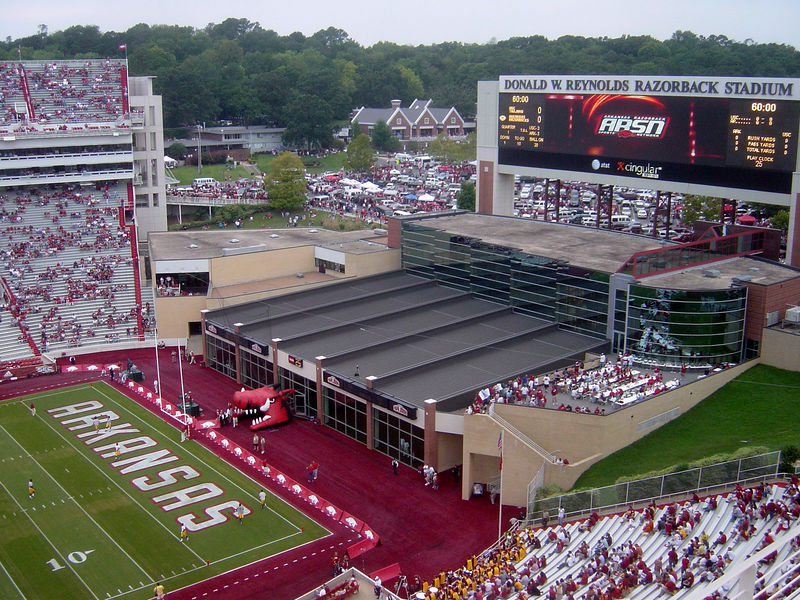 According to Arkansas Football Camps,

The Broyles Athletic Center (inset picture) is likely what Gary Pinkel is asking for when he asks for new football offices, weight rooms, and locker rooms. At the rate south end zone tickets go for (about $73 a seat), paying for the kind of improvements being discussed here will take decades, even with completely full stadiums (something that is first happening this year with ranked Georgia coming to town).

When I hear Gary Pinkel ask for expedited renovations, I can't help but think he's doing what he's been doing since he came to Columbia: trying to build Mizzou into a contender. Not just for recruits and on the field, but for the kind of high profile coaches who would come after him. Any significant renovations to the south end zone would take a few years to finally open, right about when many expect Pinkel to retire and coincidentally when they'll be looking to name the new facility.

Funding athletic renovations can be a prohibitively expensive effort, one that often requires multiple revenue streams be they private donations or ticket sales, but Mizzou can't afford to drag it's feet if it truly wants to compete in the SEC. The winningest coach in Mizzou history, who, in 13 seasons, laid the ground work for Mizzou's return to national relevance and capped a stunning 2013 season by winning an SEC East championship on Faurot Field, is looking for a capstone (just) off of it.

The Gary Pinkel Athletic Center has a very nice ring to it.