Taking a look at SEC Conference-mate Vanderbilt Commodores, with help from Christian D'Andrea from AnchorofGold.com, HHKB Chris, & switzy227. All predictions on the upcoming season are based upon a Game-By-Game pick of the upcoming season instead of just ranking the teams, in hopes we would get a more interesting look at the team rankings.

The loss of Eric McClellan occured halfway through the season last year, and it was a blow to the ‘Dores as they struggled all season after his departure. McClellan was the leading scorer and was dismissed after playing just 12 games. The next leading scorer for Vandy was Rod Odom, and he’s graduated. Kyle Fuller was the floor leader for a team that had very little depth. Then the curious case of Dai-Jon Parker, who was second only to Odom in minutes played. He did something that got him dismissed for the "violation of team rules" variety. He'll be playing this year in Division II instead.

Damian Jones had as big of an impact on his team as any freshman in the league last year. A highly productive player who is mean on the block and the potential to get even better as a scorer and a rebounder. Siakam is the quintessential little things player. He can log a lot of minutes, score a little, rebound a little, screen a little. He can play on the wing, or the high post. Josh Henderson has some good touch inside but didn't play last year after injuring his knee in December, he was playing pretty well but not scoring much before his injury. Kornet is a nice project because he has great size and soft hands, as he gets stronger he'll become more effective. Moats is a guy who will step in a hit a dagger three every once in a while. Carter Josephs is a good story after earning a scholarship where he was previously a walk-on. I'll be honest, I thought it was a typo that he didn't score last year. That's difficult to do while playing in 20 games. 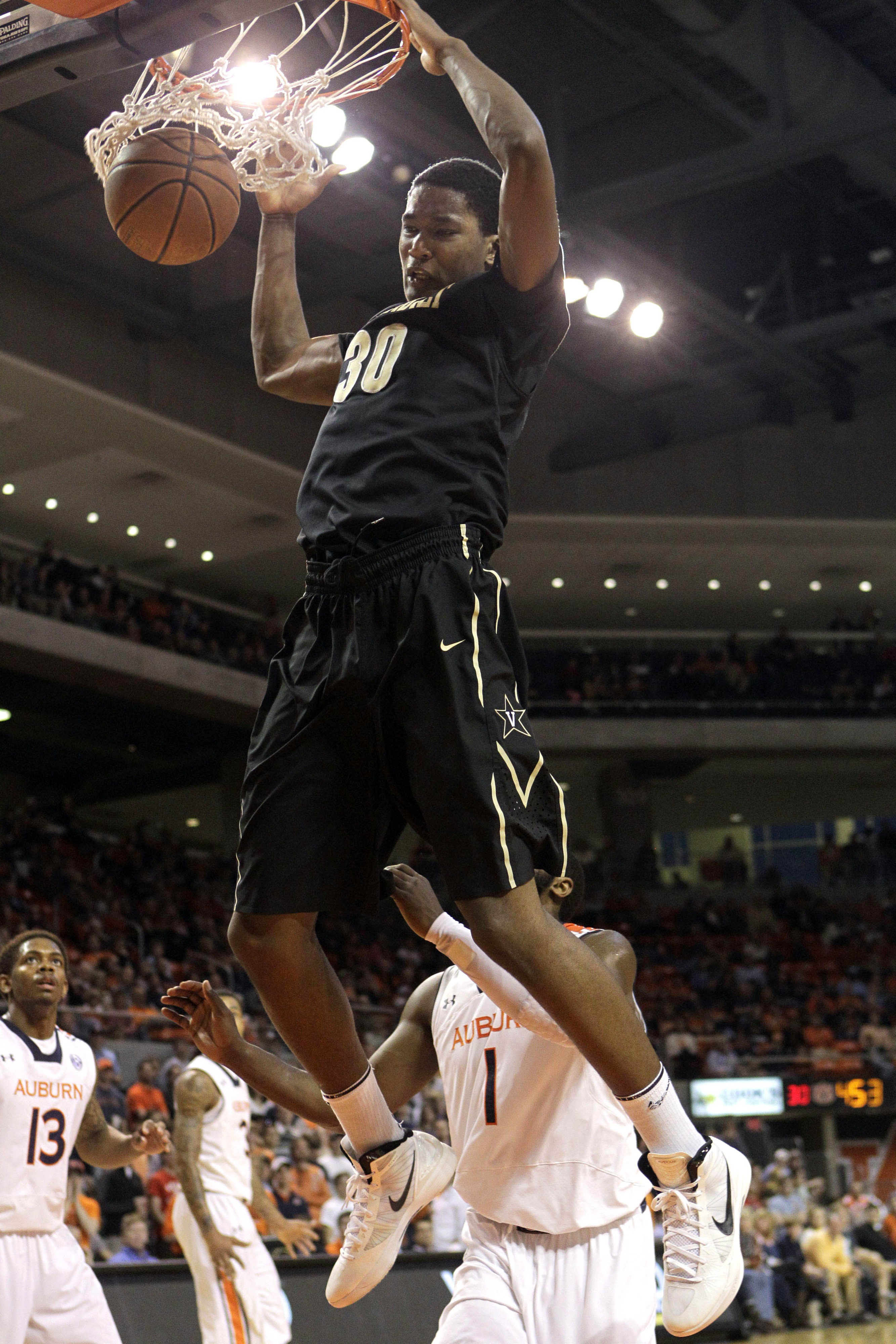 Jones was a relatively highly rated player coming out of high school, but I don’t think anyone expected the impression that he made in his inaugural season in the SEC. He proved devilish on the defensive end, and in his rebounding, while his offensive game showed enough growth for him to be an impact scorer as a frosh. Jones was dynamic, and as he grows the ceiling for Vanderbilt does as well. The best case scenario for Vanderbilt might that Jones expands on his play this season, and comes back for an even bigger junior campaign. But watch for Jones to be the biggest impact player on the roster this season

As much as Shelton Mitchell is considered the prize of the class, perhaps the most important guy in the class is Wade Baldwin. Baldwin has the chance to be a steadying presence as a frosh and help balance the backcourt. It’s easy to expect Mitchell to be an important cog, but if Baldwin can knock down shots and be a major contributor, the ceiling for the Commodores goes up significantly. Good play from Baldwin might be the difference between 3 wins and 8 wins in the SEC.

If there is reason for excitement, or hope we should say, it’s that the recruiting class is quite good. Stallings was stocking up a bit on guards with Wade Baldwin, Riley LaChance and Matthew Fisher-Davis, and then was able to add Shelton Mitchell late in the process after he decommitted from Wake Forest after their coaching change. Mitchell, you may remember was down to between Mizzou and Vandy for his final two, so of course I should tell you he sucks and we're glad he went to Vanderbilt, but that's not the case, he should lead the team in minutes at Guard. All four of the players are in the top 150 on Rivals.com, and 3 are in the top 150 for 247sports. So they’ve got good players coming in. The ‘Dores also picked up a commitment from Cornell transfer Nolan Cressler, who’ll have to sit out this year.

I’m as big of a fan of Kevin Stallings as anyone. What he's done at Vanderbilt over the course of his career has been very impressive. Just a few years ago the 'Dores were competing for an SEC Championship. Depth problems, due to numerous different problems, over the next few years all but stiffled the progress he had made. Even on their worst days though, Vandy was still a tough team to play against. This year will prove to be a big test for Stallings as he tries to rebuild the program to get back in a similar position they were in a few years ago.

The one obstacle standing in his way was depth, this year they should be decent depth wise, but when the entire backcourt is littered with Freshmen, that’s a concern. Forward/Center Damian Jones is as good of a player on the interior as there is in the SEC. James Siakam is an above average role guy who can flex between a SF and a PF, and Kornet is a stretch guy who has a feathery touch from the outside, so it’s easy to see Vandy being pretty competitive on the front court, but what to make of the backcourt?

When you aren’t deep, you can’t also be young. At least not to the point where you hope to be successful.

As talented as the incoming freshmen class appears to be, they almost needed this recruiting class last year when senior leaders like Odom and Fuller could have smoothed their transition. Vanderbilts biggest need was depth last year, and these freshmen could have provided solid depth. Instead, Mitchell, Baldwin, Fisher-Davis and LaChance are going to be thrown to the fire. I like Mitchell and Baldwins ability to step in and be solid enough to keep the Commodores competitive, but the same issues that Vanderbilt had last year will only be compounded this year by the youth. When you aren’t deep, you can’t also be young. At least not to the point where you hope to be successful.

It’s hard not to see Vandy having a pretty tough season. There is a lot of good talent on the roster, but there is just simply too much youth in the backcourt to see Vandy improving on their record from last year. And there are a lot of teams in the SEC that have improved upon their roster from a year ago. So if anything, it’s likely Vanderbilt takes a step back. They’ll probably be competitive at home and pretty rough on the road. It’s tough enough to win on the road in the SEC, so you’re probably looking at a ceiling of 8 wins for this team. More likely somewhere in the 3-6 win range. If they can keep Damian Jones on the roster going into 2015-16, it’ll be a very different story moving forward. But I expect to see some rough times in Nashville.

3-15? In the SEC? Does the earth open up and swallow Memorial Gym whole at some point in your predictions as well?

Vanderbilt won't be great, but they won't be this bad, either. There's plenty of young talent on this team, beginning with sophomore center Damian Jones. Jones was nasty as a freshman and has worked to put on more weight in order to be more comfortable in the paint. He could be the successor to Festus Ezeli this team desperately needs up front. A cache of talented young guards who can shoot will keep this team closer to .500 in conference play than your estimate of .167 - believe that.

I don't think we'll see too many sets where Kornet starts at PF and Siakam at SF. Siakam is undersized, but he's a tenacious rebounder who does his best work at the 4. It's much more likely that we'll see three guard lineups with Siakam (or Kornet) and Jones (or Henderson) than a traditional 1-5. Don't sleep on freshmen Jeff Roberson and Matthew Fisher-Davis as candidates to soak up minutes at SF, either.

For a Vanderbilt view of Missouri, CommodoreTom @ Anchor of Gold had this write up on our Tigers: SEC Hoops Preview Series: Missouri

*Before we get started, I’m a rabid hater of Vandy’s court, that thing is an abomination and should be destroyed.*
Oh Vanderbilt, will you have more than 7 players available? In the past two years transfers, dismissals, and injuries have hurt this team, so much so that Kevin Stallings was considering suiting up, it’s been too long since we’ve had a player coach! Vanderbilt will win some games, especially at home where their court has been blessed by a voodoo priestess, what the Commodores had to give up in return for the powers or "magic" of their court, well I think we’re seeing it in human sacrifice. Fix that court Vanderbilt, it’s drunk.

I'll keep the form open to be filled out until the season starts. If you would like a nifty rankings image like you see above from Christian's picks, send me an email or tweet and I'll make it happen. You can also follow me on Twitter: