Mizzou Links: E.J. Gaines is a keeper, so is Drew Lock, and hoops pulls away from UMSL

Monday's Watercooler has high hopes for this Drew Lock kid and thinks missing half of our starting secondary vs A&M is kind of a big deal.

Share All sharing options for: Mizzou Links: E.J. Gaines is a keeper, so is Drew Lock, and hoops pulls away from UMSL

"Drew Lock is an NFL prospect the day he steps on campus," Dilfer said. "Drew doesn’t need to hear that from me. He doesn’t need that extra pressure. But there’s a handful of guys who when they go to school their freshman year I know for a fact (NFL general managers) are tracking them. There’s a lot that has to happen, but he’s one of those guys."

Q: What did you think of Drew during your time with him this summer?

A: He’s one of my 10 favorite kids I’ve ever worked with. He’s just a tremendous young man. He has that presence to him that’s more important than his talent. He’s a leader of men and he’s going to have tremendous influence not just on the football field but in life. … He’s a guy that has a really good chance to develop into a big-time pro prospect if developed properly at Mizzou.

Even as recruiting priorities change, MU wants to keep a foothold in Texas - David Morrison

"Missouri’s brand in our state, especially amongst the out-of-state schools coming in, I think it’s just as strong as ever," said Dodge, who sent quarterback Chase Daniel to Missouri in 2005. "If Gary Pinkel and his staff step into your school, they’ve set the tone in their latter years in the Big 12 and, obviously, the Southeastern Conference is going to continue to gain interest in players who are possibly looking to go outside the state or maybe didn’t get the in-state offer they were looking for."

Here's a rundown of Missouri's activity in Texas from 2002 through the 2015 class. The number of offers are according to Rivals.com's database.

Pinkel is fond of saying that nothing changes, or has changed, in the base or foundation of the program. It makes him sound obstinate or stubborn at times. There’s a disconnect, though, between what he’s saying and what that means.

Kim Anderson said after the game that he liked that his team struggled and had to work from behind. If this team had championship expectations, then there would be no positives whatsoever to draw from falling behind, 25-14, against UMSL. For a young, new, who-the-hell-knows-what-will-happen team, however, I'm inclined to agree with him. The Tigers were forced to figure out how to play with the proverbial blood in the mouth. They responded well.

"No turnovers," Shamburger said when asked what stood out about his performance. "I come over to the bench after the game ended and asked coach how many turnovers I ended up with. That's a big thing with me. I really don't care about if I miss shots, make shots. I want to get assists and no turnovers. I really don't like to turn the ball over. That really gets under my skin."

"When Keith dove for that ball near the end of the first half," freshman Tramaine Isabell said, "I think that was the turning point in the game."

I've decided that "Shamburglar" is now a thing. You don't have to play along, but I made this in case you do:

His teammates got him the ball when they were playing from behind and struggling to score. He drew three fouls and made six straight free throws in the span of 48 seconds. Missouri, which trailed by as many as 11 points midway through the first half, leveled the score at 28 with 5:06 remaining. "We couldn’t keep him off the line, and he goes 8 for 10 from the free-throw line," said Bob Sundvold, the former Norm Stewart assistant coach in his second season in charge at UMSL. "That was a real momentum-shifter. … On the offensive side, couldn’t make a basket. We couldn’t score, and then John’s getting the free throws. That’s huge." 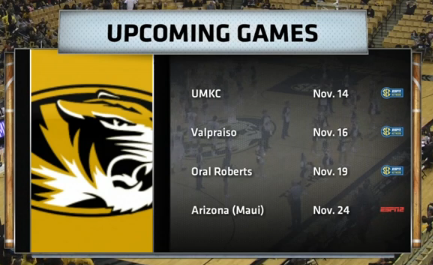 Wes Clark wasn’t shy about looking for his shot in the Missouri basketball team’s exhibition opener against William Jewell.

FROM THE WAYBACK MACHINE: John F. Kennedy in attendance as Missouri plays Navy in the 1961 Orange Bowl. pic.twitter.com/iU0p9zOgBH