Taking a look at SEC Conference-mate Texas A&M Aggies, with help from DerekAggie06 from GoodBullHunting.com, HHKB Chris, & switzy227. All predictions on the upcoming season are based upon a Game-By-Game pick of the upcoming season instead of just ranking the teams, in hopes we would get a more interesting look at the team rankings.

Losing Jamal Jones (in pretty bizarre fashion) will hurt the offensive production, something that the Aggies struggled with last year. Fabyon Harris was a guy that wasn’t going to hurt you a lot when on the floor, but also wasn’t going to help a tremendous amount. Shawn Smith played good minutes and seemed to be a good player to build on, but decided to transfer to Junior College. Reese was kicked off during the season and proved to be a bit of a headcase despite his obvious talent.

The Aggies have an interesting mix of players coming back. Five players who played significant minutes for a team that was inconsistent but played good basketball at times. There’s not a lot of scoring coming back, though late in the year Caruso showed flashes when his jumpshot started to fall. Roberson is a solid guy on the interior and Space showed the ability to knock down a few shots in the mid range. Fitzgerald is a guy who had a very nice freshman campaign and could move into contribute more this year and in the future after recovering from a knee injury. Miller and Johns both proved to be players that could contribute in small amounts to start, but could develop into very good 4 year contributors by the time it’s done. 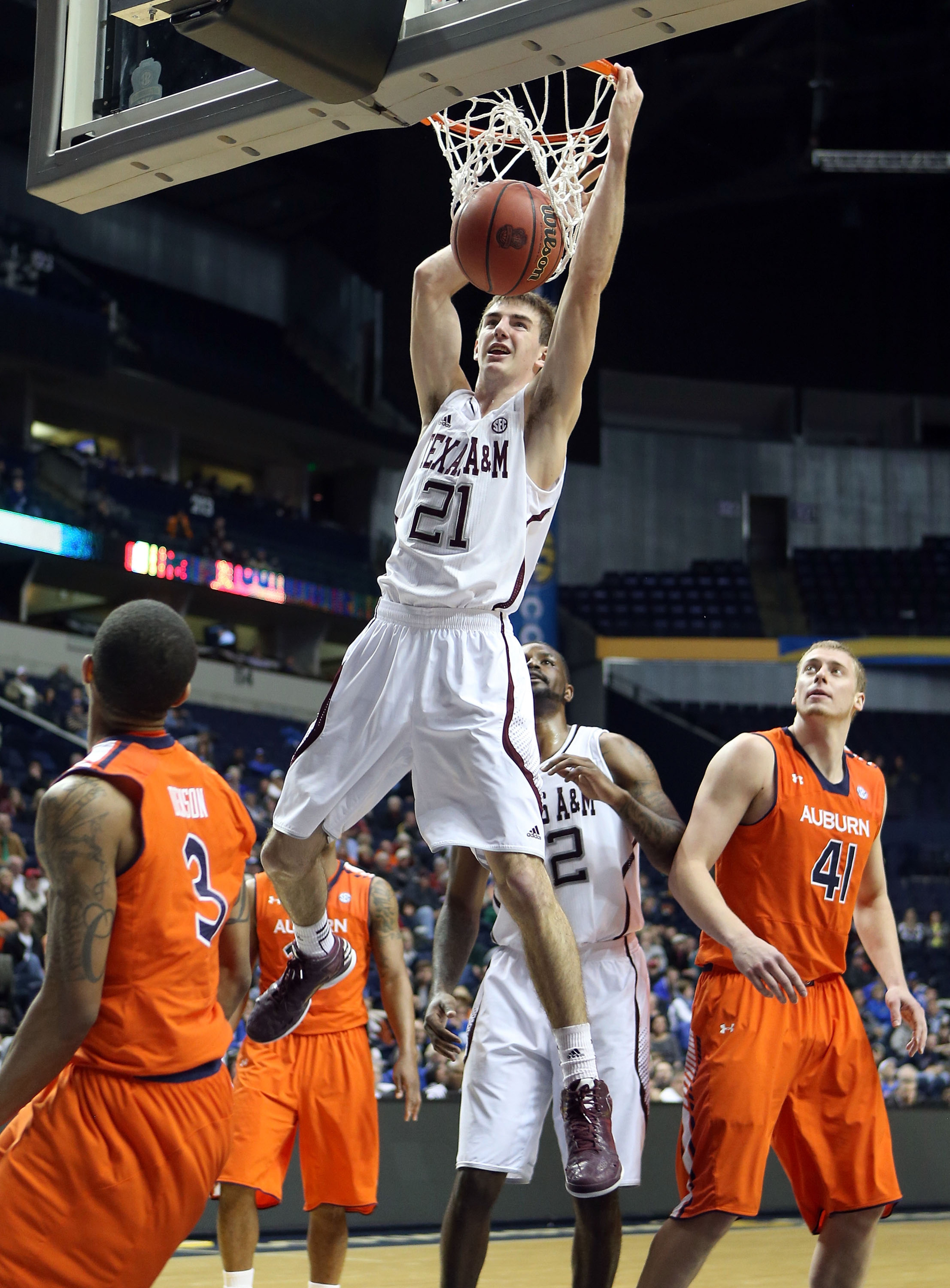 Caruso is a coaches son, and it shows. He’s the kid that does all the little things on the court. He’s a sneaky good athlete, has great court vision and plays hard. Down the stretch last season Caruso became a leader offensively and when he was good, A&M was good. If he can be a threat offensively for more of the season A&M will take that next step. 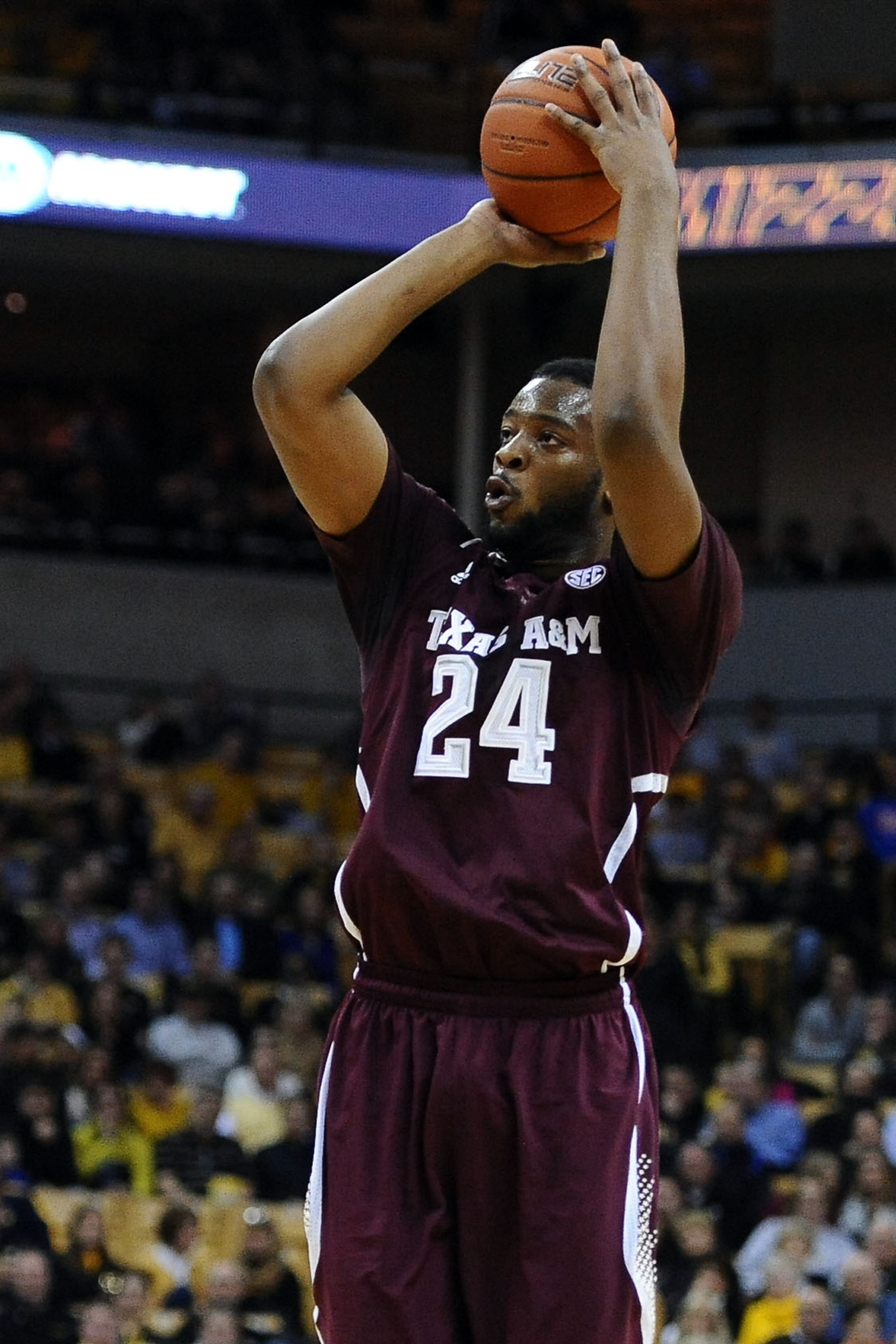 After a solid sophomore showing, the former Florida State transfer has the chance to jump forward and be the top post player on the roster. Kourtney Roberson will probably play more minutes, but Space has the better array of skills, including a nice soft touch from the outside, combined with the strong body rugged enough to endure the banging that happens on the interior of the SEC. If Space becomes a solid 3rd option, he can really give this team the lift it needs.

A huge question is going to be whether or not Danuel House is eligible. House is a former 5-star who had been a little disappointing in his impact so far at Houston, but with the coaching change there he opted for a change of scenery and could have a big impact on A&M if he’s cleared to play. Alex Robinson is a really nice point guard, which is a spot where the Aggies certainly need help, so he’ll be counted on right away to be that guy. Jalen Jones is another wing that should be able to help a lot with scoring for the Aggies, after sitting out a season. The only other guy I think can help right away would be Trocha-Morelos, and that’s because of his size and he’s had a year to sit out (after not qualifying academically) to get stronger (which he needed to do).

Billy Kennedy has quietly built a solid foundation in Aggieland. The Aggies aren’t super talented in a lot of areas, but they’re solid and deep. He’s also got one of the best recruiting classes so far for the 2015 class, so things are really trending up after some rocky years post Mark Turgeon. After taking over for Turgeon in 2011, Kennedy had some down years while fighting through some adversity in the form of player injuries, and even being diagnosed with Parkinson’s disease. They had a surprisingly good season last year, and almost completely under the radar, and built the foundation to take another step into the upper half of the SEC.

They’re still not as explosive or deep as a lot of other teams at key positions.

I like A&M as a possibility to take that step this year. It just won’t be easy. They’re still not as explosive or deep as a lot of other teams at key positions. The biggest concern would be at point guard where it looks like the leader to start at that position is a freshman. Alex Robinson has all the tools to be a great player, but anytime you’re asking a freshman to carry that load it’s never going to be easy, unless you’re Kentucky, and not even for them all the time. The bigs are solid but pretty unspectacular with Roberson and Space. I have a love/hate relationship with Alex Caruso, he’s one of those players that makes so many little plays that keeps his team in the game that as an opposing fan it drives you nuts. The love part is that he’s a joy to watch because of those reasons.

Where A&M starts to lose me is that they have trouble scoring. They’re good enough to win some games at home without scoring a whole lot, but it’s another story going on the road. If Danuel House is eligible and takes a set forward(I'm not counting on it), and Jones is the guy they need him to be, there’s a good chance that A&M will surprise a lot of people. However if House isn’t eligible, if Jones doesn’t add another dimension offensively, it could also be a long year for the Aggies. There are far too many variables in the SEC to write this team off, or ignore them. What’s probably likely is that they have a year similar to last where they surprise in a few games, win a few they shouldn’t and end up around .500. So basically in the middle of our projections.

The question every Aggies Basketball fan is asking: Where are the points going to come from? I'll go against the popular choice here and lay my chips on the young Davonte Fitzgerald. He played early and somewhat often as an under-the-radar true freshman last year, and it looked like he started to finally get a feel for the college game just before suffering a season ending injury. The only question I have on Fitzgerald heading into this season is where his confidence level is. We've all seen guys struggle to come back from these tough leg injuries from a confidence standpoint, but Davonte is my guy this season if he can pick up where he left off last year. He's got a great knack for finishing off plays and can keep a zone defense honest with his shot.

Do we have to talk about post play? Kourtney Roberson will start and carry the bulk of the minutes for the Aggie big men, but his disappearing acts against taller and stronger defenders in conference play was a real black eye for the front court last year. Antwan Space progressed as a player during the season, but not to a level where you can feel confident about him carrying the load down low for the team (unless we're playing Tennessee, holy cow this guy is Volunteer hoops kryptonite). Tavario Miller and Dylan Johns will provide contributor minutes, but neither showed the ability to take the next step during last year's campaign. The question mark Aggie fans have been waiting for for over two seasons now is Colombian import Tony Trocha. He comes in to the season will plenty of intrigue, a nice outside jumper, and even more intrigue. We'll see how Miller, Johns, and Trocha have developed during the offseason, so we'll have to grade the Aggie front court with a TBD until about a month from now.

If there's one thing I hope to see from the team this year, it's an increased tempo. We looked more bland than Coors Light if we tried to slow the game down and get into set plays (if you love dribble handoffs outside the perimeter, boy did we have a deal for you). With the addition of a lightning quick point guard in Alex Robinson, we could be on the edge of seeing an entirely new Billy Kennedy system in Aggieland with Caruso and Green streaking up and down the lane. Look for the Aggies to start games shooting with around 15 seconds left on the shot clock, and hopefully teams will take a while to realize that we've really struggles against a zone defense for the past three years.

Hello fellow Big 12 refugee! We’re going to be in this together forever, blood brothers if you will. A&M were under the radar good last year but they get overshadowed by folk hero and Cleveland Brown Johnny Manziel, but that team was quietly good so don’t be surprised if you notice that hey, A&M has won some games. At the end of the day, Billy Kennedy hates Vanderbilt’s court as much as I do, so BK have it your way and I’ll support you.

I'll keep the form open to be filled out until the season starts. If you would like a nifty rankings image like you see above from Derek's picks, send me an email or tweet and I'll make it happen. You can also follow me on Twitter: