Thursday's Watercooler is locking down Missouri's basketball borders and is eagerly waiting a mid-morning football scheduling announcement at Arrowhead (is it BYU? What if it's kansas!). And oh yeah, there's a game on Saturday versus a dangerous conference foe we won't see again for 10 years, no big deal.

Put it in your ears!

Emailed forwarded by Mizzou from the Chiefs: Going to be a press conf. at Arrowhead tomorrow for a "major college football" announcement.

Reading between the lines, tomorrow's announcement at 10:30 AM will be about a future game at Arrowhead between #Mizzou and some other team.

Missouri has one opening on its schedule next year for Nov. 14. Seems kind of late to play a high-profile neutral-site nonconference game

BYU coach Bronco Mendenhall talked earlier this fall about a possible 3-game series with Mizzou. Columbia, Provo and a game at Arrowhead

Michael Sam and Tigers in the League

Michael Sam Jr. doesn’t talk to his father, who has been caricatured in the press as an anti-gay man who abandoned his family.

A lot of words about the secondary with GIFs, don't worry, it's nothing anyone would want to read.

• A&M counters with one of the country’s best young pass rushers in freshman Myles Garrett, who’s right behind Ray among SEC leaders with 11 sacks and 12.5 tackles for loss.

"He’s been very disruptive," Pinkel said. "He’s very very impressive for a young player. He’s got a lot of ability. He’s got great size. He reminds me of Aldon Smith, a first-round pick, a top-10 pick who played for us and now plays for the 49ers. That’s a really huge compliment. Just a very good athlete who has great movement and presents a lot of problems. Other than that, it’ll just be an easy chore. … Imagine what he’s going to look like here in another year or two. He’s a great young player and he certainly has everyone’s attention on every play, which you have to have."

Shane Ray and Myles Garrett are the SEC sack leaders. Ray had 6 in non-con, 6 in 5 SEC games. 8 of Garrett's 11 have come in non-con games.

CHANGE OF PACE: Texas A&M led the SEC in points per game and yards per game in its first two seasons in the SEC under Sumlin. The Aggies still move at a quick pace and rank fourth in the SEC in scoring offense and total offense, but Sumlin said he’s doing something this season he didn’t do with quarterback Johnny Manziel at the controls. He’s taking the tempo down a notch, at times.

You think MU's offense has been inconsistent?

You think MU's offense has been inconsistent?

On if MU will miss coming to A&M after playing there 4 times in 5 years. No. Not at all. We've played our last couple there in the Big 12, then it seemed like we got in the SEC and we've had a few in a row here, too. It's a great place to play. It's a great, great environment. We're excited about playing in it. It's a rich tradition. I always look forward to it. They have great fans. It's a great college environment. I tell our players that, when you're playing in this league, you get a chance to play in some of the best venues ever. You've got to embrace it. What you always want to do is try and play your very, very best. 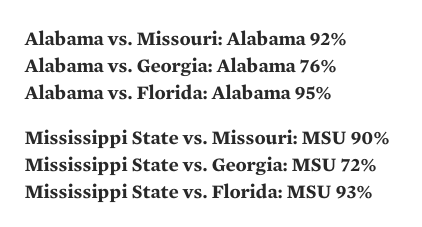 (And here's where I remind you that the F/+ ratings and win probabilities cull from the entire season, not just last week. Missouri is still given a 60% chance of beating A&M because A&M's near loss against ULM carries equal weight to the Aggies' win over Auburn. Adjust your own odds however you see fit.)

In my (poor) analogy, the Missouri Tigers are the Cleveland Indians. What they are in reality is the Southeastern Conference's potential worst nightmare.

"We are excited about the addition of Kevin and Cullen to our program," Anderson said. "Both come from outstanding high school and non-scholastic programs. Kevin has had the chance to play for Coach Jimmy Cain at Blue Springs South High School and L.J. Goolsby at KC Run GMC, while Cullen played for his father John at Pacific High School and Scott Schroepfer's St. Louis Gateway program.

"Kevin is a versatile, combo forward who brings a great blue collar, tough mentality that fits the culture we are trying to create here at Mizzou," Anderson said in the statement. "He can shoot it from the perimeter or go inside and mix it up. He takes great pride in being a Missouri Tiger."

Talking about the Tigers

Johnathan Williams is one of the few constants on a Missouri team that replaced just about everybody from an underachieving squad last year.  Tyrone Johnson has the chance to be one of the surprises of the season, given he's a senior that's only played 2.5 conference games in his career in the SEC.  Jarell Martin helps a strong LSU front line, while Armani Moore may be one of the most underrated players in the league this season.

Welcome to the Show: Breakout Freshmen in the Former SEC East " Rush The Court

Missouri: Montaque Gill-Caesar. Gill-Caesar has already slid into a starting spot on the wing and his NCAA-ready offensive game should help him retain that position throughout his Tigers career. The 6’6″ Canadian is also a long and strong defender who should give head coach Kim Anderson a versatile weapon in his first year guiding Mizzou. Gill-Caesar’s long-range shooting has been rusty this preseason, but a big performance against Missouri-Saint Louis showcased his ability to get to the rim and score efficiently (19 points, 6-of-7 FG on shots inside the three-point line).

Today is the start of the early signing period for high school seniors to sign their National Letter of Intent, and some Aggie Hoops recruits jumped on board on Day 1.

The Tigers signed Bruins guard Sophie Cunningham, who is the reigning Missouri Class 5 player of the year and Missouri Gatorade player of the year, along with Rock Bridge forward Cierra Porter and 6-foot-2 forward Hanna Schuchts from the Maclay School in Tallahassee, Fla.