Taking a look at SEC Conference-mate Tennessee Volunteers, with help from Editor-in-Chief Will Shelton from RockyTopTalk.com, HHKB Chris, & switzy227. All predictions on the upcoming season are based upon a Game-By-Game pick of the upcoming season instead of just ranking the teams, in hopes we would get a more interesting look at the team rankings.

Tennessee lost a lot. They lost everybody who contributed last year outside of Josh Richardson. And to top it all off they lost their head coach also. They also lost a couple guys who didn’t contribute a whole lot when they lost their coach, and they lost some recruits the coach was bringing in.

Jordan McRae and Jarnell Stokes are the biggest loss as they were counted on for a lot of the scoring opportunities last year. McRae was prone to taking bad shots in high volumes, but the Vols such a good offensive rebounding team that it often didn’t matter. Having Stokes and Maymon around certainly played a big role in that. It’s hard to predict how much the Vols are going to miss this guy and that guy, because as you’ve seen, they’ve got almost a whole new roster with a new coach and a new style of play.

Just 5 returners, three of which played the whole year, only one that averaged more than 13 minutes. Josh Richardson is a stellar defender and energy guy and the expectations of leadership will be heaped upon his shoulders this year. Hubbs is a former 5-star recruit coming back off an injury and has a chance to be the biggest difference maker for the Vols. Moore and Reese proved to be solid enough to get minutes last year, but will need to take another step forward if this team is going to be competitive in the SEC. 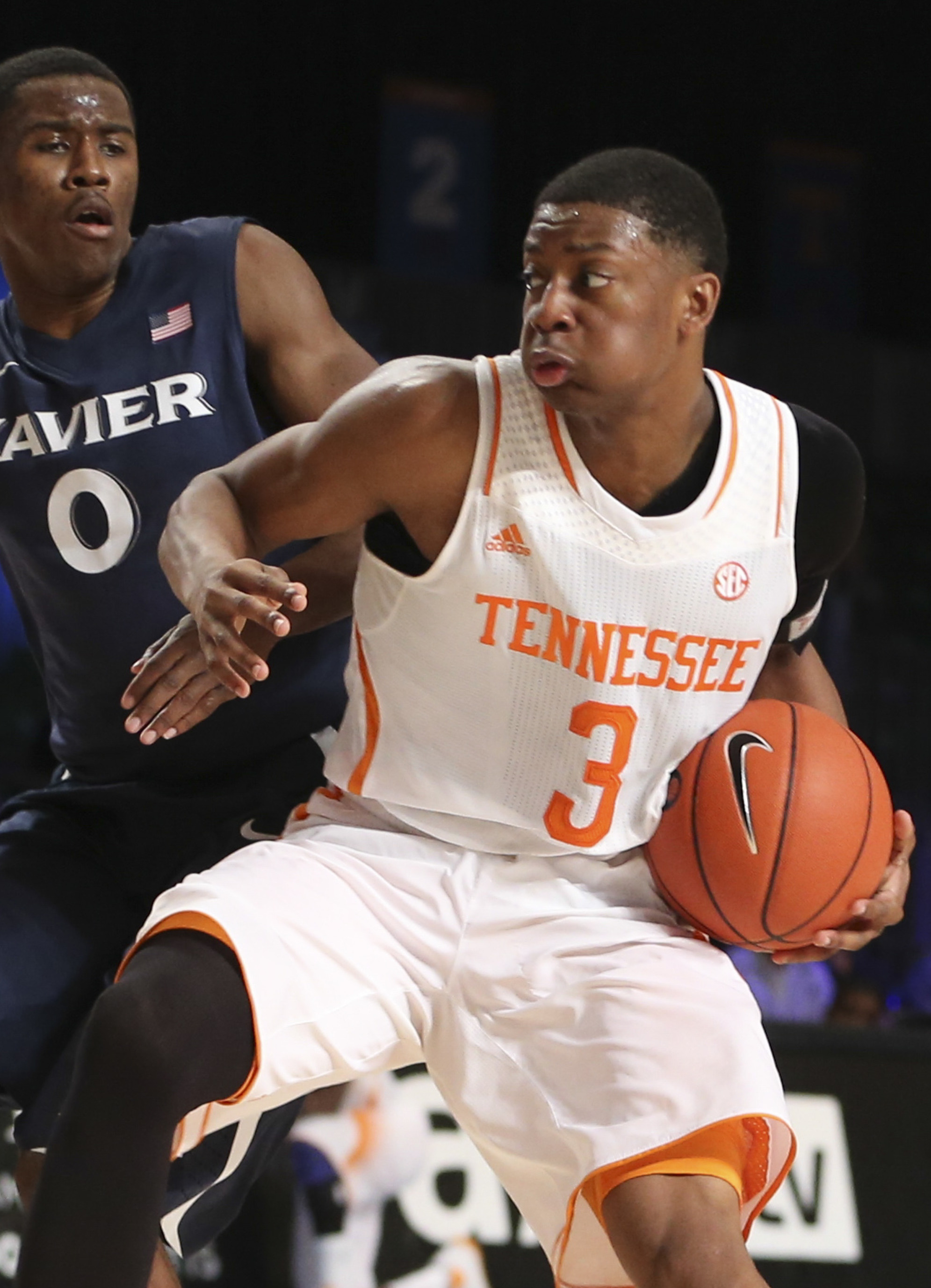 The most talented Volunteer is Robert Hubbs. If Hubbs lives up to his billing, and stays healthy, Tennessee could have an SEC star on their hands. He’s a good shooter, handy with the ball in his hands, and can score in a variety of ways. He’s the highest impact player on the roster. For Tennessee to have a good season, they need Hubbs to become the recruit that Vols fans thought they were getting before going down with a knee injury. 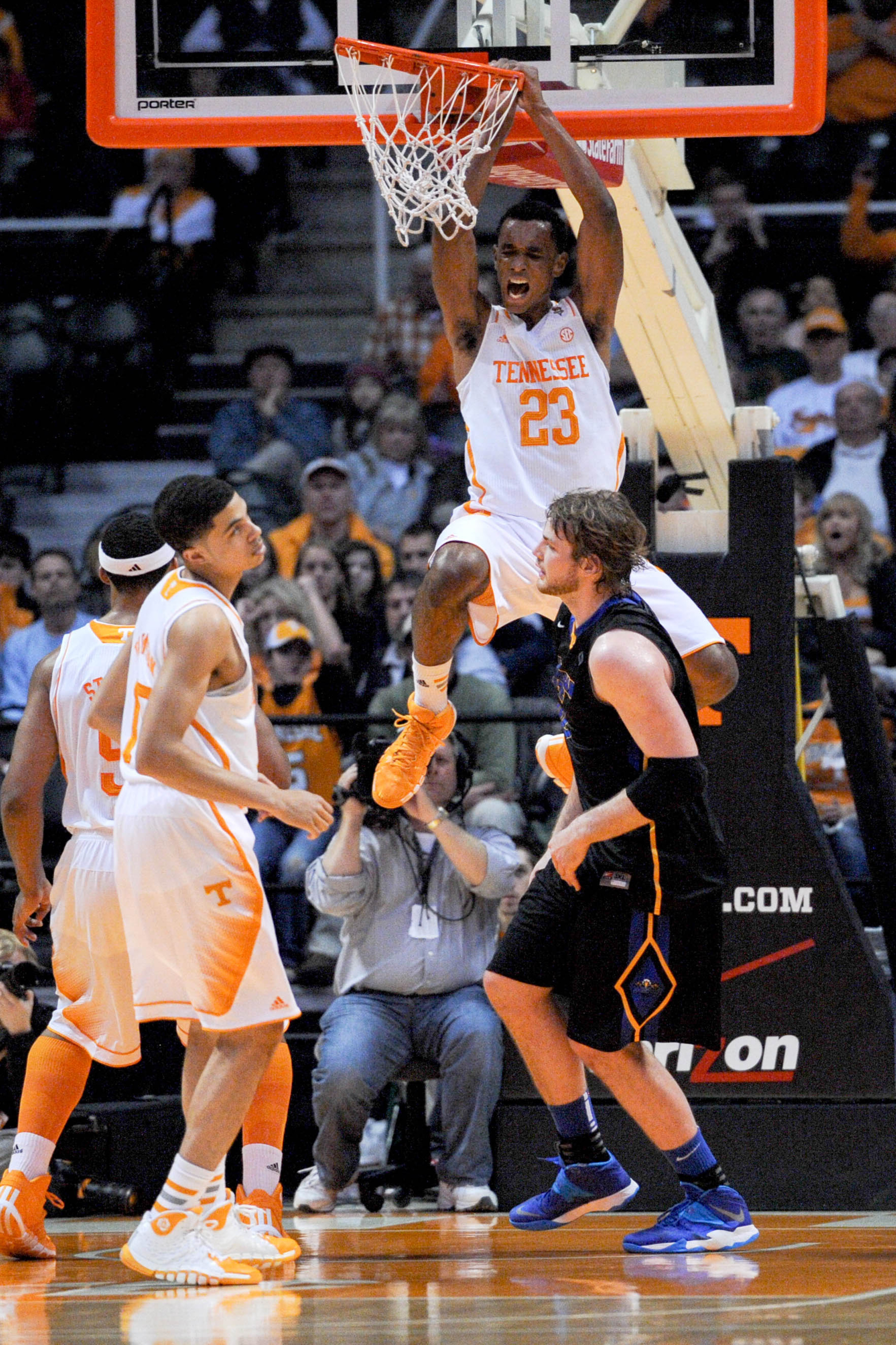 It was tough to pull one guy on the list to single out here because quite honestly after the top 3-4 players on the roster, everybody could be that next guy. One that I like is Reese. He's a flex forward who can play inside and out and be that skeleton key player that Tyndall likes to use. He's active enough that he could be a kind of 8-10 point, 5-6 rebound guy which would be huge for UT this season.

When you have a lot to replace you end up with a newcomer list that looks like a fully competitive roster. There is reason for some excitement amongst this list however. Detrick Mostella had a pretty interesting recruiting saga, but he’s a super talented combo guard who has a chance to make an impression early on. Kevin Punter was recruited by Missouri, among a few other high majors, and was a JUCO All-American. Dominic Woodson is a former 4-star and has a chance to contribute immediately if he can stay out of trouble, and Ian Chiles should be able to help a bit as a 5th year transfer. Owens is a guy that has a high upside and great athleticism, but probably can’t be counted on much right away. Carmichael and McGee look to be interchangeable Tyndall type of athletes. This is a class that could be quite exciting with some growth.

I secretly love the hire of Donnie Tyndall. It’s certainly not the sexiest hire, but Tyndall is a warrior who shouldn’t take long for him to get Knoxville rocking and rolling with his rough and tumble trap and go style of play. After Cuonzo Martin left for the Cal job, many in Vol nation got what they wanted which was Martin out. The coaching search went a little awry as they thought they had their guy before ultimately settling on Tyndall.

Mizzou fans will remember Tyndall’s Southern Miss team running Mizzou out of their own gym in an NIT loss to close out the end of a disappointing season. One of the main questions will be if Tyndall will be able to get the players he wants to make his system work and work consistently against better competition. I don't worry too much because I think Tennessee has always been one of those programs just begging to be a powerhouse. There are great facilities, a decent past and recent success. Though the turnover this season might be a bit too much to overcome.

In Hubbs, Richardson, Mostella and Woodson, that is as good of a foursome as there is in the SEC, talent wise.

Tennessee is one of probably 8 teams in the SEC who could just as easily win 12 games as lose 12 games in conference play. They’ve got talent on the roster, though they maybe aren’t as deep as Tyndall would like them to be. In Hubbs, Richardson, Mostella and Woodson, that is as good of a foursome as there is in the SEC, talent wise. The main concern for the Vols is everybody else. How will the JUCO players transition? How will the unranked trio of 3-star forwards impact the roster? And as late as Tyndall got the job, with as many roster spots as he had to fill, are any of these guys the right fit for Tennessee?

The roster seems full of a lot of the same kinds of player. Tyndall is used to that. There are a lot of Wings of decent size, and forwards of decent size. There doesn’t seem to be a Point Guard or true post guy (maybe outside of Woodson, who is a bit of a project despite his talent). The way Tyndall likes to play, that may not be a problem. It’s still a concern though. There's also the lingering potential NCAA trouble that may follow Tyndall from Southern Miss to UT, but it remains to be seen how culpable he is in all that. It will potentially hurt recruting in the short term, but I think Tyndall is the kind of guy who can win more games than he should with lesser talent. With all that said, I still think this team is a player or two short of being a big time threat in the league. I don’t think it will take long, but there is just not enough depth to compliment the talent at the top.

Tennessee fans who didn't like Cuonzo Martin's style of play may see something more entertaining with Donnie Tyndall, but I'm not sure the wins we're accustomed to will be on the table this season. The Vols have made the Sweet 16 four of the last eight years and played in either the NCAA or NIT nine years in a row. But just putting recognizable faces on the floor will be a challenge in 2015.

Josh Richardson, who was outstanding in the NCAA Tournament last year, has to go from the third or fourth best player on the team to the number one option, and all are curious to see how well he will handle teams defending him as such. The Vols will be long and athletic but lost so much beef in Jarnell Stokes and Jeronne Maymon, and will replace it with a former point guard turned post defender in Armani Moore and a pair of tall skinny freshmen in Willie Carmichael and Tariq Owens, at least until Dominic Woodson gets into the sort of game shape Tyndall wants.

I very much agree the Vols could win or lose 12 games in league play, though I think the latter is getting better odds right now. Tennessee needs Mostella and Woodson to be all that they think they can be and desperately needs Robert Hubbs to play up to his potential as a five-star. If those things happen, the Vols can compete. If not, Tyndall's first year will be more about growth than wins and losses.

Anyone want the UT job, anyone? Bueller...Bueller...Bueller...This was a tough job to get filled, but once you run off your previous coach who took your team to the Sweet 16 that makes some sense. Let’s be real, the Vols have lost lots all the production and if Tyndall can turn it around I will not be surprised, I think UT has got a good one, just don’t freak out and scare him away just ‘cause Pearl is doing fabulous things down at Auburn, PATIENCE! Oh, and hey famous alum Clay Travis...BOOOOOBS!!!!!!!!!!!!!!!!!!!!!!

I'll keep the form open to be filled out until the season starts. If you would like a nifty rankings image like you see above from Will's picks, send me an email or tweet and I'll make it happen. You can also follow me on Twitter: