Taking a look at SEC Conference-mate Georgia Bulldogs, with help from Mr. Sanchez from DawgSports.com, HHKB Chris, & switzy227. All predictions on the upcoming season are based upon a Game-By-Game pick of the upcoming season instead of just ranking the teams, in hopes we would get a more interesting look at the team rankings.

The big loss was the dismissal of Brandon Morris. Morris proved to be an offensive threat for the Dawgs last season and was very effective coming off the bench, and then even starting some games down the stretch. Donte Williams was a solid inside presence who provided good minutes and solid production. Dixon didn’t get a lot of time this past season and likely saw some writing on the wall as he transferred out in search of making an impact with his last season of college basketball.

The return of the big strong solid backcourt of Mann and Gaines is what should give Bulldog fans hope for another strong season. Both players solidified the Georgia attack and were tough physical defenders who were one of the main reasons for the surprise season Georgia had a year ago. Thornton is another highly effective player on the interior who was granted a medical waiver to play one more season in Athens. Djurisic could be a key player this season as he has the ability to stretch the floor and knock down jump shots offensively. Look for more contributions from Parker and Frazier as sophomores. Forte has shown the ability to contribute with good minutes on a regular basis. Kessler was a guy who was spotted here and there, and could contribute more. 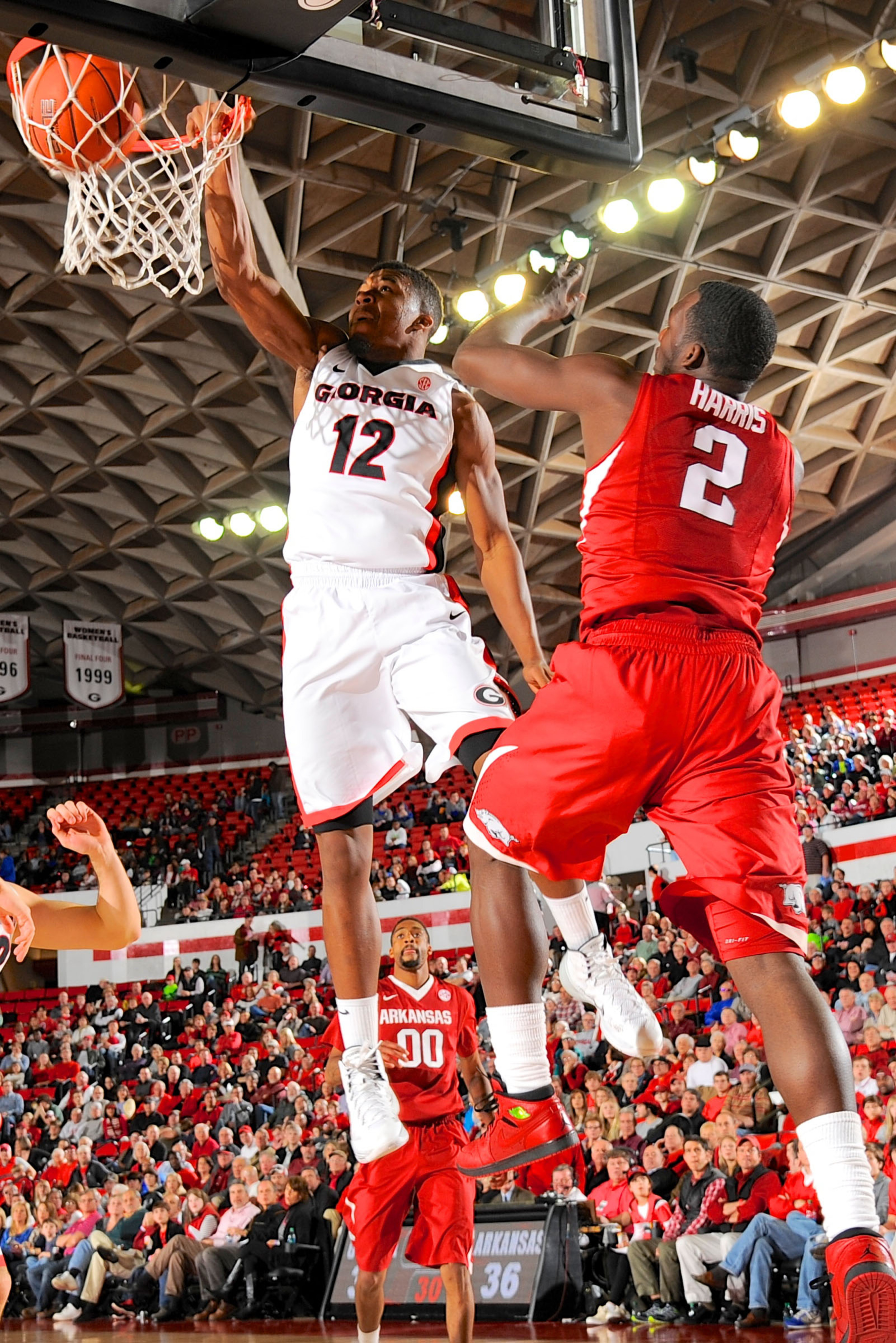 It was tough to choose either Gaines or Mann, as both players are deserving of the "player to watch". That said, I like Gaines ability to control the game more through his play. He’s strong and steady, hits on a higher percentage of shots, and down the stretch of the season proved that he’s the most versatile player on the roster. I think that step he took at that time is the one that’s going to propel him into the 2014-15 season. 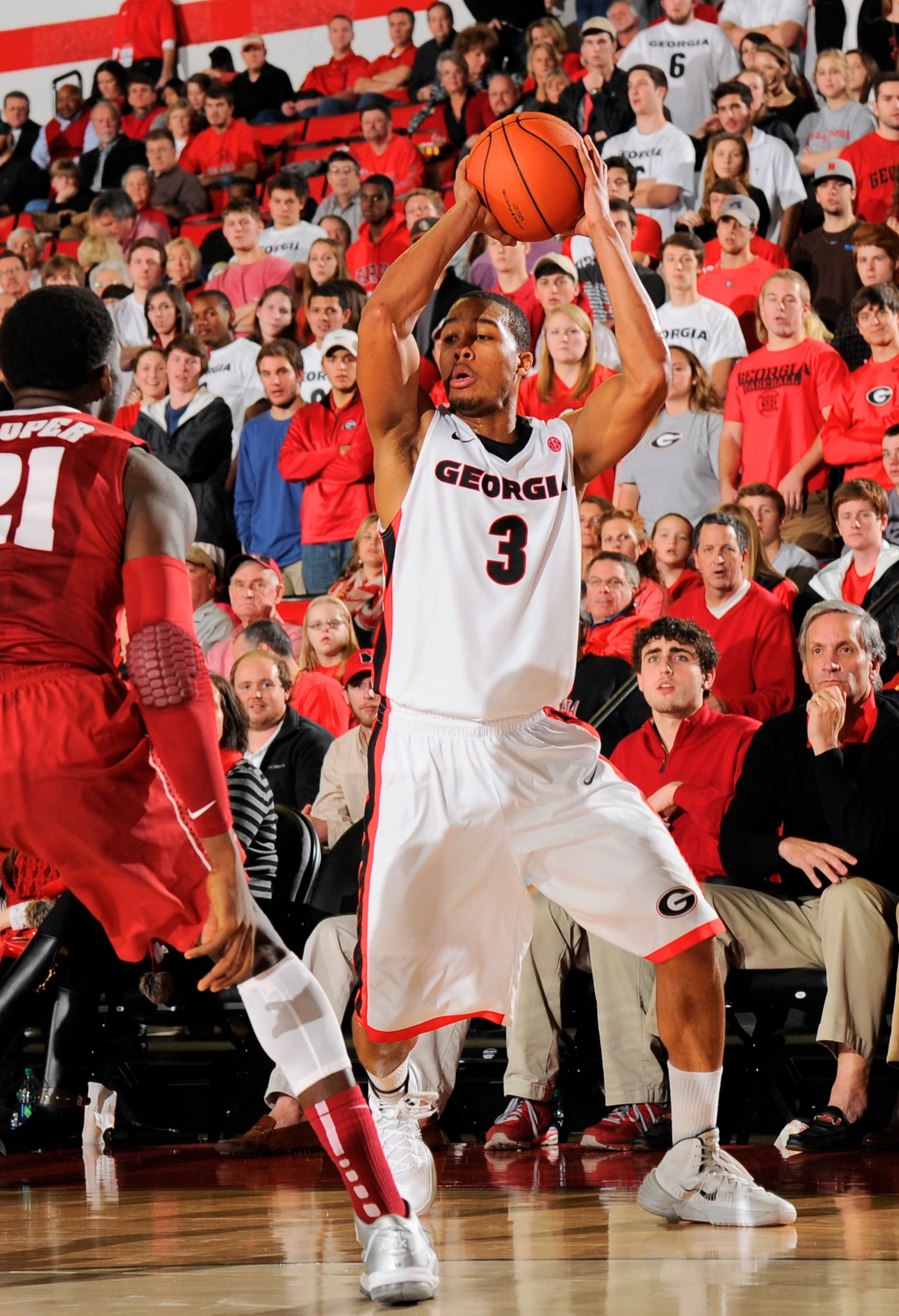 Iduwe and Maten have the chance to contribute right away as both have bodies that are college ready. Iduwe is a tall and slender center, but has soft hands and nice athleticism who has the ability to really grow as an offensive threat, but should be able to help defensively in the immediate. Maten is a little more skilled at the moment, and has good size already at 240 lbs and 6-8, but doesn’t have the same type of length that Iduwe has. The guy I’m most intrigued by here is Dusan Langura who is a Swiss national and a great shooter. He’s coming off an ACL injury while serving in the Swiss military after a BOMB went off near by, the redshirt freshman can shoot it, and could contribute right away.

The Bulldogs walked into Mizzou Arena to kick off their SEC season a wounded team after going 6-6 in non-league play, including an 18 point loss to George Washington. Mark Fox’s seat was getting pretty hot after two consecutive seasons of sub-.500 play in Athens. Things were not looking good. Then Georgia beat the Tigers in Overtime, which started a pretty improbable run in league play that ended with the Dawgs in 3rd place, despite not having a real signature win. Georgia beat a lot of the flawed teams that lurk in the SEC, but never took down the teams that made the NCAA tournament, Tennessee, Florida or Kentucky.

Yet the reason there is so much optimism surrounding the Georgia program is that it feels like something clicked during league play last year. Fox has struggled to really have a team that reflected him as a coach. Last year the Dawgs were tough and physical on defense, disciplined and patient on offense, and played well together. They had an identity, at least in SEC play, and that identity won them a lot of games in league play.

In Mann and Gaines the Bulldogs have two of the more efficient players in the league.

The question becomes whether or not Georgia has captured something, or whether they just overachieved in an underachieving league last year. The answer likely lies a bit in the middle. In Mann and Gaines the Bulldogs have two of the more efficient players in the league. That doesn’t change. Thornton and Djurisic are both effective players on the interior. After that you get some concerns about depth. If both Frazier and Parker make positive impacts in likely increased minutes it would go a long way in stabilizing the program. With Mann and Gaines size, I like the idea of using another guard in the lineup to get their five best players on the floor. Still after the first 5 there’s not much there that scares you if you’re in the top half of the league. That makes me wonder how easily the Bulldogs will be able to replicate their success of last year.

Certainly there are good reasons to think that Georgia has taken a step forward with how they played at the end of the year. They’ll still have offensive limitations, they’ll still be tough as nails on the defensive end. When their shots are falling they’ll be one of the better teams in the SEC, when they aren’t… they’ll look pretty bad. I see a slight step backward from their league performance last year, but hopefully the improvements made will be enough to keep them afloat through the non-conference competition, and give them a shot at the NCAA Tournament.

Georgia basketball fans are masochists. We have to be considering the constant struggles of the program we support. Right now there is a mixture of feelings. The early half of last season had almost everyone expecting a coaching change last spring but that emergence in SEC play created hope.

Mann and Gaines are back, and both are All SEC caliber players. Marcus Thornton returned from multiple injuries and moved inside, where he became a solid all around player on the block. He has another year to work on being a post player, and should be what Fox needs down low in his system as a senior (if he remains healthy). And Yante Maten has had glowing reports from camp as an impact freshman at F after Fox beat Indiana, as well as Tom Izzo, for the Michigan high school product.

So a core for hope is there, but then Brandon Morris had to go in the spring. He was the glue guy for the starting 5 and doesn't seem to have a replacement on the roster. We also can't expect the conference as a whole to be as bad as it was last year. So there is some hope, but enough issues both recent and long standing that makes that hope seem foolish. So the TL;DR version: Georgia hoops fans have no idea what we are about to see from our guys this winter.

What might be the best thing going for UGA right now is that no one wants anyone’s autograph from the team, so NCAA, nothing to see here. Georgia was surprising last year coming together once SEC play started, which was only a little too late since you have to play the non con as well. So, Georgia, start playing well from the start and you could be dancing, and seriously, the SEC needs someone to dance this March, three is always better than two!

I'll keep the form open to be filled out until the season starts. If you would like a nifty rankings image like you see above from Mr. Sanchez's picks, send me an email or tweet and I'll make it happen. You can also follow me on Twitter: